Waves LV1 software audio mixer. It's just possible that it changes everything 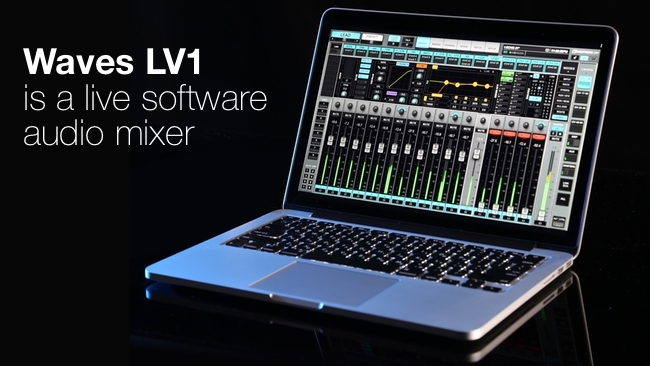 You can't exist in today's tornado of technological progress without expecting things to change drastically. Waves LV1 just possibly changes everything in the world of audio mixing. By Phil Ward

With the Waves Audio eMotion LV1 Live Mixer, and its proposal of truly on-the-fly audio mixing for front-of-house, monitor and broadcast engineers, the relationship between hardware and software shifts yet another gear. In its wake, business models should be re-shaped and working practices possibly even revolutionised as users, quite literally, get to grips with it.

It’s a software-only mixer based on SoundGrid – Waves Audio’s proprietary networking solution and the key to so much irrigation of workflow. It’s configurable in 64, 32 or 16 stereo/mono input channels, portable or stationary, and compatible with any I/O or server that supports SoundGrid. Each channel has its own plugin rack capable of running up to eight Waves and third-party plugins: eMo D5 Dynamics, eMo F2 Filter and eMo Q4 Equalizer come as standard, while all the plugin presets and chains saved in eMotion LV1 can be shared with the Waves MultiRack and StudioRack plugin hosts.

Most importantly, it’s controlled by an open-ended choice of hardware interfaces and multi-touch devices ranging from four touchscreens to a single laptop or tablet, and as such will only encourage the emerging habit of using tablets for mixing – particularly as it goes beyond simple remote control and into the realms of shifting audio. But of course it exploits all the latest custom computer hardware, including the new generation of touchscreens unavailable just a year ago and now on the market for only £300. The software for these screens has caught up too, and is now being adopted by manufacturers of hardware digital mixers as they upgrade their on-board interfaces: Lawo consoles, for example, use the new Dell touchscreens.

Waves Audio has gone one logical step further, offering the customer the software for these screens separately and inviting them to adopt whichever hardware they prefer. Any choice of laptop, desktop and tablet can be hooked up to one or more screens, while a new swathe of dedicated hardware interfaces is on its way: this year should see Peavey/Crest finally shipping the Tactus operating surface, developed jointly with Waves, while other hardware manufacturers are reported to be keen on offering everything, in due course, from faders to stageboxes. The Mackie Control Universal Pro (MCU Pro) surface has already implemented the Tactus protocol.

It predicts a future of processing ownership and hardware rental, and very much calls to mind the paradigm shift of around 15 years ago in recording when digital methods rapidly shook up people’s expectations: the computer had absorbed all the processing, but users began to find a basic keyboard and mouse unsatisfactory. A slew of hardware interfaces followed, reacquainting customers with the tactile reassurance of a few knobs and faders. As the live market continues to tussle with digital mixing ergonomics, perhaps Waves has found a new way forward: one that echoes that recording evolution by encouraging self-help among picky engineers. Let’s face it: if it fits into a suitcase, they’ll want it.