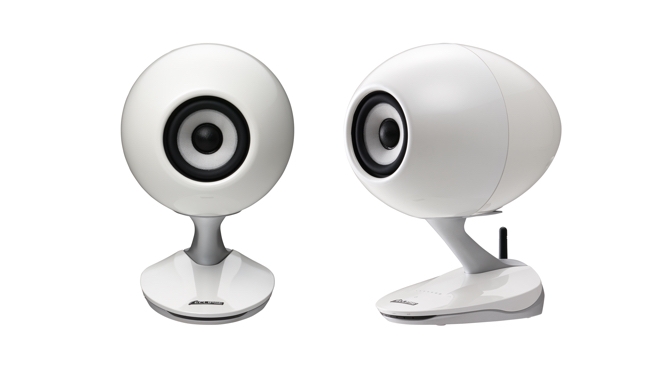 We review the Eclipse TD-M1 computer speaker set, an elegantly designed product with sound quality and characteristics that justify its premium pricing.

Any doubts that a desktop loudspeaker can be worth nearly £800 vanish even without turning them on. The minute you take the TD-M1s out of the box, it's unambiguously apparent that they're something special.

Let's imagine that you have somehow been able to distill all the design cues from the last 30 years of science fiction films and used this knowledge to design a desktop loudspeaker system. This is what they'd look like. I'm certain of it. But these are more than just scenery.

For a start, they're solid; quite incredibly so. The egg shape is to avoid the usual diffraction effects caused by having the flat surface at the front of conventional loudspeakers. There's a single 8cm driver and the entire mechanism is isolated from the frame, so that there are no spurious resonances caused by the loudspeaker structure itself. All of this adds heft to a device that already looks and feels like a sculpture. I'm quite serious here: if you like beautiful objects, you will get almost as much pleasure from the TD-M1s when they're turned off as when they're on.

That's not to detract in any way from the sound of these loudspeakers. They do sound good, and – just like the way they look – they sound good in their own, unconventional way.

There's only a single driver in the TD-M1 enclosure. This is a bold design decision, because single drivers have a limited frequency range. It's the same reason that cars have gears. It's because engines are only efficient over a relatively narrow range of RPM. With cars, you have multiple gears; with speakers, you normally have multiple (at least two) drivers, each handling its own optimal set of frequencies. The drawback with this seemingly effective arrangement is that the electronics that feeds different frequencies to the right drivers also modifies the sound, messing with crucial information contained in the phase relationships of the audio. It's hard to overstate how significant this is for accurate audio reproduction.

By constraining the design to a single driver, Eclipse avoids this problem completely and the company goes to great lengths to explain why this is so good. Its explanation refers to an area of audio physics called an 'impulse response' and this is traditionally where it gets very complicated and hard to understand if you're not a mathematician. But, luckily, there are some easy ways to grasp what's going on here.

Imagine you're in a cathedral. These have huge enclosed spaces with very long reverberation times. Acoustically, they're amazing. It's such a natural sound (surprising, perhaps, for a man-made building). Now, imagine that you have a theoretically perfect loudspeaker and, some distance away, a theoretically perfect microphone. Play an infinitely short click through the loudspeaker and record it with the microphone. What you'll capture is called the 'impulse response' of the building. An impulse response is like white noise in the time domain. The click will be reflected in all directions and there will be multiple reflection paths, all intermingling to produce the final sound, which you've now recorded. Artificial reverberation devices in recording studios can use these recorded impulse responses in a process called 'convolution' to apply the reverb characteristics of acoustic spaces to tracks as they are recorded or mixed down. It's a powerful technology and a very good way to analyse audio and acoustic spaces.

Hold the idea of an impulse response in your head. Now imagine what happens if you apply one to a conventional loudspeaker, with multiple driver cones. Each of the drivers will respond differently. A low frequency driver will respond slowly because of its mass and the electrical characteristics of its drive components. A high frequency driver will respond quickly and will be out of step with the bigger driver. With a more complicated sound than a single impulse, all kinds of incoherency will conspire to mess up the sound in subtle and not so subtle ways. An enormous amount of R&D goes into making crossover circuitry that doesn't mangle the sound too much, but it is unarguably better to not have a crossover at all.

So, after all that theory, how do the TD-M1s sound in practice?

Unsurprisingly, these desktop loudspeakers don't have a massive bass response. If you want your stomach to vibrate in time with the music, these aren't the speakers for you. But if you want to hear detail in baselines that you might not have noticed before, these will help. To be honest, the times when you're sitting at your desk and you want loud bass are probably very few, especially if you have other people around you.

I've auditioned these speakers for many hours now. Several things stand out.

First, I've rarely heard such pin-point stereo accuracy before, even with much more expensive speakers. It's not just that the sound-stage is laid out before you with every instrument quite meticulously rendered in space. It's more like everything is levitating in front of you, crystallised in a glassy hologram. If you close your eyes, you really feel like there's a world in miniature, right in front of you.

Second, you notice detail in familiar pieces that wasn't there before. You can hear individual notes from a twelve string guitar and percussion that that was previously hidden.

A modern remix of David Bowie's Space Oddity came to life with a startling degree of presence, as each element of the recording was stripped bare. Deadmau5's Strobe, full of difficult acoustic energy, seemed entirely at ease with the TD-M1s despite their lighter bass.

Stevie Wonder's Boogie on Reggae Woman sounded funkier than I have ever heard it. These speakers almost seem to extract extra life from the music. I wonder whether it's because of the lack of phase-distorting crossovers and the fact that there's just a single loudspeaker cone. Less, it's tempting to conclude, is more.

Classical music sounds transparent and engaging. Chamber music, particularly so. But one type of audio stopped me in my tracks. Spoken words. I don't think I've ever heard a better loudspeaker for reproducing speech. This is great if you're a radio lover. It's even better if you work as an audio editor. If there's something wrong with your recording, you'll hear it on these speakers. And if the recording's good, it will sound amazingly lifelike. 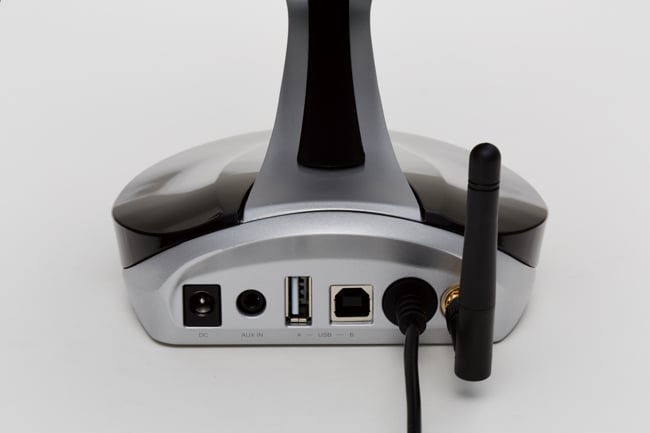 There's a range of inputs to the TD-M1s: analogue, two types of USB and WiFi. There's no Bluetooth, but then these aren't designed for portability. Nor are they meant to fill a room. Instead, they're at their best when sitting on a desktop, either side of your computer monitor. As such, I've found that the best way to connect them to your device is with USB. The analogue input is good, but the USB with the same material is clearly better. I don't see why you would want to deviate from this unless you absolutely need to be further away from the speakers.

You have to place the speakers carefully, with the axis crossing slightly in front of you. Height is important, too. There's a simple lever to adjust the vertical angle, but you have to be prepared to support the weight of the speaker as you're setting it up. The elegant and minimal controls are via a touch surface and cover On/Off, volume and input select. There's also an app for your phone that will give you a few more options.

These are not desktop speakers for the average computer user. Far from it. The TD-M1s have the feel of a classic design to them, like an Eames chair or a Dieter Rams radio. But more than that, they sound amazing, too. Are they worth the money? The more I live with them, the more I think they are.