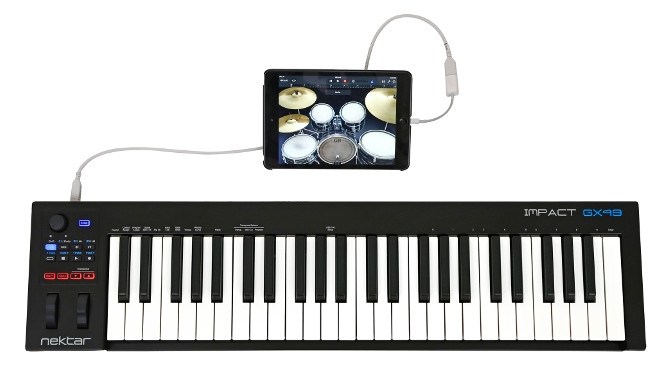 We review a new keyboard controller for your digital audio workstation, the Impact GX49 by Nektar. By Erik Vlietinck.

Integrating with Logic Pro X, Reason, Cubase, ProTools and many other DAWs, while offering an excellent keyboard experience, seems to be Nektar Technology's goal in life. The company just released the Impact GX49 MIDI keyboard/controller.

What instantly stood out when I first opened the Nektar box was the quality of build of this keyboard/controller. The keys look like those of a real piano keyboard and are silent even when you hit them hard.

What's more is that Nektar makes the offering complete with a set of downloadable MIDI control setups for all supported DAWs and a free Bitwig 8-Track licence. I briefly tried the Bitwig offering, but can't tell much about it, other than that I find the interfaces of Reason and Logic Pro X more intuitive.

Although the Impact GX49 is a keyboard first, it offers 14 assignable MIDI buttons. At the left hand side is a button island with Transport/Navigation buttons, a Setup button and a Shift button that activates a secondary level of button assignments. A potentiometer can be assigned its own MIDI message as well. Here you'll also find the Modulation and Pitch Bend wheels.

The Setup menu gives access to functions such as Transpose button functions, control assign, selecting velocity curves, etc. These functions are organised under menus that are accessed from the keyboard itself. The function menus are printed on the keyboard so you don't have to consult the user guide to find them. They are separated in two groups — general functions and transpose button assignment options.

What I was particularly curious about was the velocity sensitivity of the Impact GX49. To get some idea of what this keyboard is capable in that area, I used a copy of Pianoteq 5 and its velocity calibration module. The softest touch resulted in a velocity of 15, the fortissimo touch in a velocity of 114. To change the velocity curve to one of the four you can choose between, I had to:

This set the velocity curve immediately and exited Setup. In case you mess this up, you can always restore the keyboard's factory settings.

Although setting velocity curves was easy enough, I lack the knowledge of MIDI commands to delve deeper into creating my own functions. It isn't necessary to control most DAWs, either, as Nektar has done all the hard work for you.

I tested the Impact GX49 with Logic Pro X mainly, after having briefly tried out the device and its integration with Propellerhead's Reason, Audiofile Engineering's Triumph sound editor and iZotope's Iris 2 synthesiser. With its dedicated MIDI setup installed, Reason and Logic Pro X recognised the keyboard immediately and with the latter I could control Click, Mixer open/close, Cycle on/off and effects like Arpeggiator enable/disable with the buttons.

The potentiometer gave me additional functionality. Turning the knob by itself let me control the volume of the active track. Turning the knob while holding down the Shift button allowed me to change the master volume.

As everything on this keyboard has a nice tactile feel and feedback, it was a joy to control Logic Pro X without having to reach to my typing keyboard, just as was controlling effects with the slightly rubberised and solid-feel Pitch Bend and Modulation Wheels.

The Nektar Impact GX49 is a keyboard with a great quality of build and nice feature set. It can be used with your computer, as well as with an iPad using a converter cable. It costs around €110, depending on the store you buy it from.