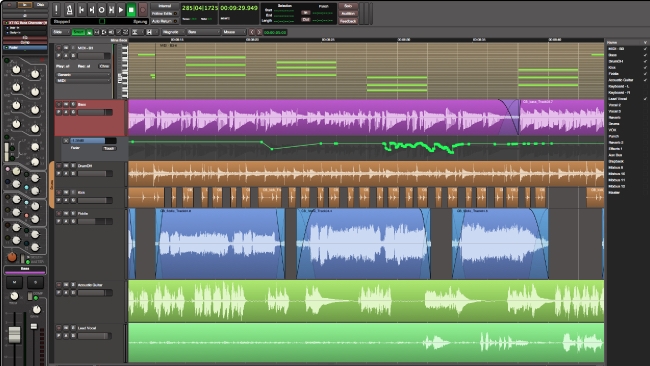 Harrison's new Mixbus32C is the company's impressive attempt to emulate the character of its classic analogue consoles for the digital age.

You may not have noticed CPU clock speeds increasing much over the past decade, but that doesn't mean that computers haven't been getting faster. Harrison says that its new Mixbus32C wouldn't have worked five years ago.

It's certainly an ambitious product, based around a complete emulation of Harrison's classic analogue consoles. And when it says "complete emulation," it really means it. Mixbus32C doesn't just resemble the layout of a channel strip on a real Harrison console, it actually sounds like it - convincingly.

Computer-based mixing has moved beyond the basic function of combining multiple channels of digital audio. There's now enough compute power to emulate analogue processes, as if they were in the analogue domain – complete with all those desirable analogue characteristics. Apparently, Mixbus32C can simulate analogue tape saturation, as well as the usual EQ and compression.

Amazingly, it goes even beyond this level of analogue authenticity by digitally modelling "every resistor, capacitor and transistor," according to Harrison's website.

Mixbus32C is a powerful DAW in its own right, running on Windows, OS X and Linux, and it can use the industry standard plug-ins for each host platform.

We think this new version of Mixbus is a huge achievement and, at $299, is well worth a look.

The Mixbus32C engine is internally dithered, ramped and gain staged so that sound quality is preserved as close to analog as possible

Unlimited stereo or mono input channels, each with unlimited plugins, sends and hardware inserts (limited only by CPU and disc speed)

Recording operates like a tape machine: punch-in on the fly, and use per-track input monitoring just like a multitrack tape machine

Plugin "pin connection management" provides rich editing of signal-flow through each channel's path, including full support for dual mono, mono-to-stereo, sidechaining, and other advanced flows
The user interface scales to fit your monitor; larger monitors will get bigger knobs and sharper text
Refined workflow and graphics, including scaling and support for HiDPI (Retina) displays
Incredibly cost effective because of our world-wide open source collaborators

Mackie control protocol is provided for motorized fader controllers, and the Mackie protocols have been extended to ergonomically control the Mixbus channelstrip EQ, compressor, and 12 mix bus sends. Dedicated support is provided for popular devices like the Presonus Faderport, Mackie MCU, and Behringer X-Touch controllers

Mixbus32C will open Mixbus sessions. However, the EQ will not covert since they are completely different.