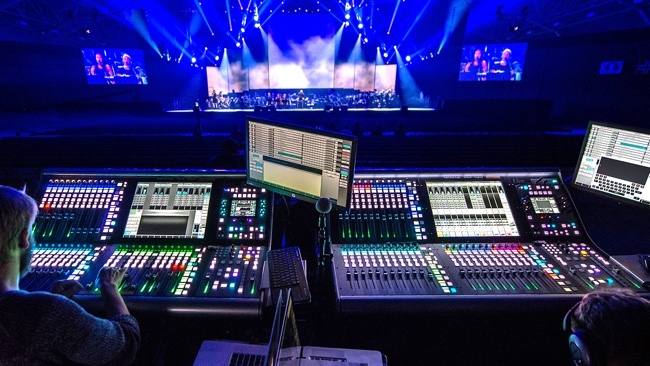 The history of digital signal processing has moved from dedicated DSP chips to FPGAs. Now Intel CPUs are handling the processing duties for some live mixing boards, aided by simple operating systems designed for such use.

We're living in an age of rapid change. Almost everyday, we read about developments that are surprising and deeply impressive. Some people think that it's because we're fed so much information that it just seems like there's more progress, but that's not actually true. Real, significant improvements in technology are happening all the time.

When you look back a few decades, the changes are even more incredible.

The dawn of digital signal processing

In the mid 80s, I was involved in a start-up company that was going to build a digital audio mixing console using discrete DSP (Digital Signal Processing) chips. DSP chips are in everyone's mobile phones now, but back then, they were really special. What distinguished them from "standard" CPUs was that they were optimised for processing digital audio signals in real-time. What this amounts to is being able to run a short program for every single sample that comes along. Unlike a CPU, which can be called on to perform an almost limitless number of different things, a DSP can do certain tasks that come up all the time, very quickly – multiplication and adding, for example. There are dedicated parts of a DSP to do this and, because this is essentially done in hardware, it's very quick: ideal for real-time work.

Our digital mixing desk used an Analog Devices ADSP 2100 DSP chip, which was (I'm told) not designed for professional audio at all, but for echo cancelling modems. Nevertheless, it was available, reasonably priced and fairly simple to understand. We had to use several of them for every channel in the mixer.

As it turned out, the mixer worked, but didn't sound great, because we didn't have enough bit depth. And the project ran out of steam before we could design a 'mark two', with wider mix buses and all the things that we should have done the first time if we had had the benefit of hindsight.

Other companies started using DSPs. With them, you could process a very small number of channels in real-time. Analog Devices Sharc DSPs became quite popular and the channel count increased gradually with each new generation of silicon. Digital Audio workstations (DAWs) required plug-in cards with DSPs on them to handle the audio processing, because computers in the late 80s through most of the 90s weren't powerful enough to handle multi-channel audio on their own.

From FPGA to CPU with real-time OS

To some extent, DSPs have been replaced (in the pro audio market) by FPGAs. These relatively expensive chips are incredibly powerful, because their hardware can be programmed and modified by software. You get the best of both worlds: hardware speed with software flexibility. FPGAs are used for video processing, too (a typical use is to convert HD video into ProRes, a format used in video acquisition and post-production). A modern mid-priced FPGA can probably process multiple thousands of audio channels.

A couple of weeks ago, I came across two digital mixing consoles, both designed for live use. One was by Avid and the other by SSL. And they surprised me, because neither was using DSPs or FPGAs as their processing engine. Instead, they were using Intel eight core i7 CPUs.

Why is it surprising? It's because Intel desktop CPUs aren't designed specifically for audio processing. But what they do have is oodles of processing power that can be turned to it and special instruction sets that make them behave more like DSPs. The reality is that today's general purpose computing has a lot of signal processing in it. Every time you see a picture or hear a sound, that's signal processing, even if it's just a case of modifying a static media file. We're immersed it (what used to be called) multimedia. Think of a program like Skype – you need real-time audio/video and also the power to compress and decompress those media streams.

It's surprising, too, because these chips normally run Windows (or OSX on an Intel-based Mac). These aren't the sort of operating systems that you want to run in a critical situation. They're absolutely fine –  in fact very good –  for general purpose work, but when you think of the number of notifications and error messages that you get in the course of a normal day's work, you absolutely wouldn't want that if you're mixing Carlos Santana or Beyonce in front of 30,000 people.

But these desks don't run Windows or OSX...well, not completely. The Avid S6L uses one of the Intel cores to run Windows for a touchscreen display that's used to configure the mixer. It doesn't matter if it crashes, because it won't affect the operation of the desk. (I'm not implying here that Windows crashes all the time.)

Instead, they run real-time operating systems. These are much simpler OSs that are designed to carry out critical tasks in real-time. Because they don't carry all the baggage of a general purpose operating system (you don't need email or Skype on a live mixing desk), they're much less likely to crash and, if they do for some reason, they will do so gracefully and in a non-intrusive way.

And because they don't have the complexity of their bigger OS cousins, they can get more done. For example, they are much better at allocating processor cores and CPU services. Much of the brute power of modern processors is hidden by the operating systems that they run, which themselves consume a lot of power. A real-time OS lets you get "closer to the metal" and exposes the raw power of the processor.

What does this mean in practise? It means a lot.

It means that two eight core processors can handle a very large number of audio tracks with effects and dynamics. I'm told that on the Avid S6L, the processors can handle many more tracks than are actually provided on the mixer. They don't use all of these because it's good practise to leave plenty in reserve.

This is an important time in the history of digital audio processing. Incredible though it seems, quite ordinary (but extraordinarily powerful) desktop processors are now the default choice for live digital mixers.

You can see how this has happened. Even an iPad 1, which is now considered to be woefully underpowered, can process audio in real-time. You can run software synths on it and virtual studios. The latest iPads are many, many times faster. But they're always considered to be feeble compared to desktop processors, which are now so powerful that two of them can power a mixing desk big enough to handle the largest live concerts.