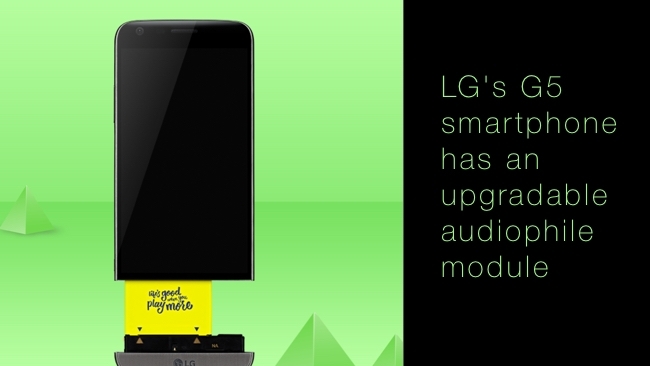 What's not to like? Here's a new smartphone with a DAC module made by a top HiFi manufacturer

Smartphones have a very big audience. They're probably the biggest selling tech devices in the world.

On the other hand, audiophile equipment - products that raise the quality of audio reproduction beyond what we're used to from our everyday gadgets - is pretty rare.

What's even more unusual is when you get a pairing of these two categories. Well, it's not just unusual: it's unique.

Until this week, that is.

Because LG has just announced it's new G5 flagship phone, and in a world where it's increasingly difficult to distinguish one high performing smartphone from another, this one is really different.

What makes it stand out is that it is modular. In fact, just like an old-fashioned desktop PC, you can take the end of this thing and insert modules of your choice.

We don't know how much of a choice this is going to be, but right now, that doesn't matter, because the first of the modules is the one we would want anyway.

It's called the HiFi Plus and it's distinguished by having amongst its designers Bang and Olufsen: the esteemed Danish HiFi manufacturer.

The module will cope with 24 bit, 192 kHz audio, and will upsample existing content. This may not make a huge improvement but it will at least subject the outgoing files to better treatment in the filter department.

I would love to know how many of the HiFi Plus modules LG estimates it is going to sell. I can't imagine a harder thing to predict.

It's not made any easier because we don't know the price yet and we haven't heard it.

But given the scale of Smartphone sales, if only one percent of potential G5 buyers opt for this module, then Bang and Olufsen will probably sell more of these products than any product they have ever made.