Do you remember Digital Compact Cassette? 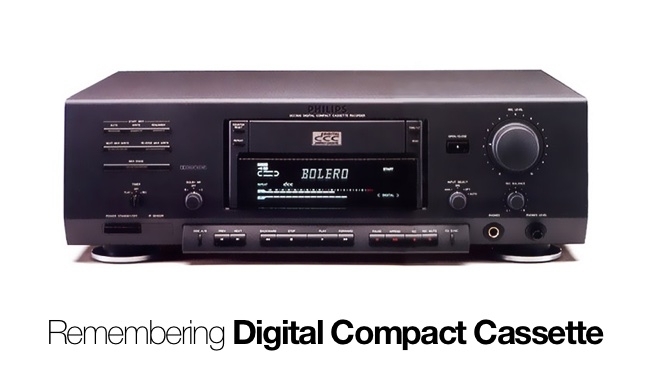 DCC is a format that is long forgotten, but it absolutely demonstrates the extreme innovation that was around in the Nineties!

For a long time in the eighties and nineties, the DAT recorder was the gold standard for uncompressed audio recording. It was exactly the same quality as CD (and arguably better, with the option to use the higher 48kHz sampling rate).

But DAT was complicated. It used a small tape cassette, and to achieve the required bandwidth for uncompressed recording, it had to use a rotating head, with all the complications that entailed. It was only the fact that rotating heads were the mainstay of video recorders that commoditised the technology enough to make it viable at all!

That wasn’t the only issue with DAT. I suspect that want finally killed it as a consumer format was the potential for it to make perfect copies of CDs. In an era more used to analogue recording, which always degrades copies through the generations, no matter how good the quality (and analogue quality could be very good indeed) the notion that you could make perfect copies had the record industry in a frenzy. One way or another, they pulled the plug on DAT, which was nevertheless to remain as the primary means to exchange studio master recordings for many years after the consumer version had expired.

But the promise of digital was too big to ignore. Consistent quality, the ability to name tracks, and the lure of a completely new consumer format that - if it took off - would spread rapidly as enthusiastic users swapped their recordings.

This is where Digital Compact Cassette sweeps into view, in 1992, as a joint venture between Phillips and Matsushita.

You could absolutely see why Phillips would want to try this. They were behind the incredibly successful analogue Compact Cassette format (in partnership with Sony). Moving to a digital version must have seemed a very natural thing to them, especially when the resulting system was able to play analogue cassettes as well as the new digital ones.

Digital Compact Cassette was only partially in competition with DAT. It was a stationary head technology that, coupled with a slow tape speed, meant that the available data rate was severely limited. The advantage was that it was cheap to build, and robust, compared to a rotating head system. The disadvantage - quite a big one, when you think of it, was that the recordings had to be compressed be a ratio of approximately four to one.

To keep costs down (or maybe because it “just worked”!) the tape speed was the same as with Analogue Compact Cassette, and the tape width was identical. In terms of the mechanism, it was almost as simple as mounting a digital head (still an analogue device but capable of recording a signal that contained analogue information) in place of the analogue one.

The heads themselves had eight sections that recorded the audio digits in eight tracks on the tape (this doesn’t mean that the audio was only 8 bit) plus an additional one for control data, track names etc.

This was, as far as we know, the first consumer application of Perceptual Coding, where the audio is compressed using a feature of the way we perceive sound. Without going into too much detail, it uses the property of our hearing where if there’s a loud sound at a particular frequency, it will mask other, quieter sounds, occupying nearby frequencies.

The method works so well that at it’s possible to significantly reduce the data rate (and hence the storage requirements) of recorded audio and still have it sound acceptable good.

Sony didn’t partner Phillips with DCC, as they had done with analogue Compact Cassette, probably because they had their own idea, which in some ways seemed more advanced: the Minidisc, which we’ll look at separately.

Well, as you’ve probably realised, DCC wasn’t a massively successful product. It was discontinued four years after its launch. It’s a pity because as a product, there was absolutely nothing wrong with it. It’s just that it was probably too high tech for ordinary consumers (it’s hard to imagine this in an age for smartphones and tablets - but we certainly were less technically savvy in those days) and didn’t offer enough for audiophiles, who probably saw CDs and DAT - and even analogue - as a better bet. Not only that but around the time, recordable CD came on the scene. These were a different proposition altogether. You could “rip” your CDs to a CD-R, and it would play on your existing CD player - if you were lucky. And don’t forget that file sharing was just around the corner.

Not the best climate in which to launch a format with debatable superiority and little perceived advantage over other digital formats, or even some analogue ones.

But thank you Phillips, for at least exploring this possibility!