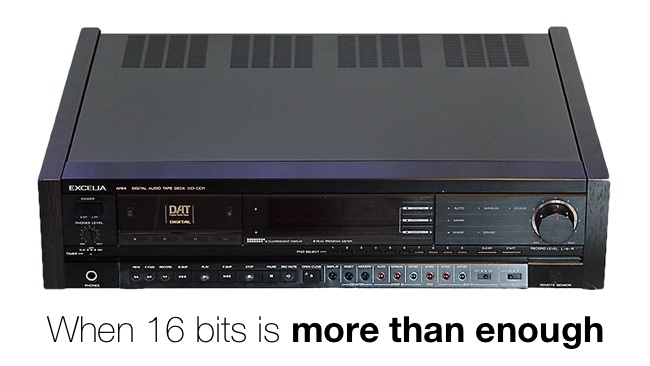 When 16 bits is more than enough

Sixteen bit recordings seem so last century. But don't dismiss them. 16 bits is more than enough for playback

It’s often said that 16 bit recordings aren’t enough to capture the full dynamic range of a performance. Confusingly, that’s both absolutely true and completely false. Let me explain why.

That’s simple, but it avoids stating what the real problem is, which is that if you have a live performance, you don’t have full control over it. For the best signal to noise ratio, you want to peaks as loud as possible without distorting. With a sixteen bit recording, if you’re too cautious, you’ll “waste” bits. This means that what was supposed to be a 16 bit recording might actually only be a 14 or 12 bit one, and that means fewer levels available to accurately “draw” the shape of the audio waveform. And if your loudest audio only has twelve bits, think how course the quiet parts will sound!

There are some very clever ways you can use limiting to avoid clipping, but however gentile and unobtrusive, it’s never going to equal a recording that worked out “Just right”, with peaks going to 0dB digital and not trying to go beyond.

This, almost alone, is responsible for the idea that 16 bits isn’t enough for a wide dynamic range. Used appropriately, 16 bits can give you 96dB of dynamic range; more than enough for almost everything but the Big Bang.

Because it’s so difficult to record an unpredictable performance, and because this almost inevitably results in a sub-par recording, it’s more sensible to use 24 bits when capturing audio live. This makes the files bigger but only by 50%. Compared to video, the files are minuscule. There’s no harm done (relative to a 16 bit recording) in reducing 24 bit files to 16 bits - as long as it’s done nicely. What you can’t do, though, is convert 16 bit files to 24 bit and expect them to be even slightly better.

I remember the exact time I when I realised that, well used, 16 bits is more than enough for a decent dynamic range. It was 1987, and I had just taken delivery of one of the world’s first DAT machines - the AIWA EXCELIA. This extraordinary well engineered tape deck came with a demo tape - a big band album, on (I think) the DMP label, which was one of the first to embrace all digital recording.

One track really stood out, because it had an extraordinary dynamic range. It started with a quiet, fast muted trumpet, with a flute playing the same line. Gradually, it got louder as more instruments kicked in. The drummer changed from brushes to sticks. At one point, everything stopped with a loud bang. Then a trumpeter stood up (I imagine…) and simply blasted out the loudest note I have ever heard in a recording. The noise from this brass instrument absolutely dwarfed everything that has proceeded it. It was just awesome. You would never have got that dynamic range on vinyl.

And, remember, this was only a 16 bit recording!

Quite how they made this track, I don’t know. It was long before the days of 24 bit recording.

The only way I can imagine they did this was with multiple takes, so that they knew exactly where the piercing trumpet note was coming, and exactly how loud. I somehow lost the tape, and I’d love to find the track again. If anybody knows it - please can you let me know?