Lightning strikes! But does it mean better audio? 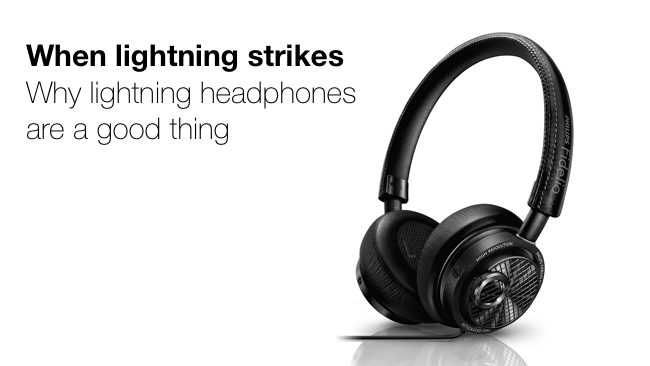 Some people are upset that Apple might be dropping its traditional headphone connector. But this is actually a good thing

It’s easy to have a knee-jerk reaction to the prospect of Apple deleting the traditional headphone socket from their phones and pads. I’ve even seen environmental campaigning groups organising petitions on the grounds that it’s incredibly wasteful if we have to throw alway all our headphones and buy new ones (they would have a point if that were the case).

But there are good reasons why we should get excited about the idea that at long last we can have a digital connection to our headphones. Mainly because we will have access to the full quality of the original music file, instead of having to rely on the built-in digital to analogue converter in our mobile device. (There’s no need to worry about having to charge your headphones or buy batteries for them - they’ll get their power from the Lightning connector.)

Good headphones are the easiest and least costly way to hear high quality audio. Not only can they match the performance of speakers many times their size, but they come with an idealised acoustic environment too. Even if you’re sitting in a stark, parallel walled public waiting room, headphones instantly give you instant calm and no reflections.

So there’s every reason to make sure that you’re able to feed your headphones a high quality signal, and up to now, that hasn’t always been possible.

For a start, it’s fair to assume that the digital to analogue converters on your device aren’t the best. Even supposedly premium products like Apple’s are built to a cost. Converters in consumer devices merely have to sound OK. They don’t have to go that last mile - but most people won’t mind. (Actually Apple’s converters can sound pretty good - especially in their Macbook Pros.)

It’s also unfortunately true that the files you have on your mobile device aren’t of the highest quality. Any file that’s compressed in a way that loses information is by definition not going to sound as good as an uncompressed file. Storage has now reached a price point where it is absolutely possible to store uncompressed audio files, and this, I would hope, is the way that we will approach our mobile music in future. With uncompressed audio (or, at least, losslessly compressed audio) and a Lighting connection to our headphones, we will for the first time have access to the full quality of the original recording.

How much this improves the sound from your headphones depends, on whether they have a good digital to analogue converter. So expect to see a wide range of prices for “digital” headphones. You’ll probably find some for $20, which will be OK if you really don’t care much about quality. And you’ll see some for ten or twenty times that, which will sound fantastic. You may even find some cheap digital headphones that sound better than expensive ones.

So, yes, it will be a nuisance if you can’t use your existing headphones any more. But there will be adaptors; but probably quite expensive, and quite possibly costing as much as a cheaper pair of digital headphones.

For the majority of phone users who don’t have an Apple device, there’s always Micro USB (and presumably the reversible USB C in the future). It’s perfectly possible to run external audio devices from this almost universal connection, and there are already very good headphone amps designed exactly for this purpose, like the Chord Mojo.

The most important take-away from this is that we can now play much higher quality audio than we’re used to from portable devices. This does not depend on Apple removing the analogue headphone socket from its iPhones and iPads, but I suspect the move to better audio will be encouraged by it.