Where does High Resolution Audio begin? 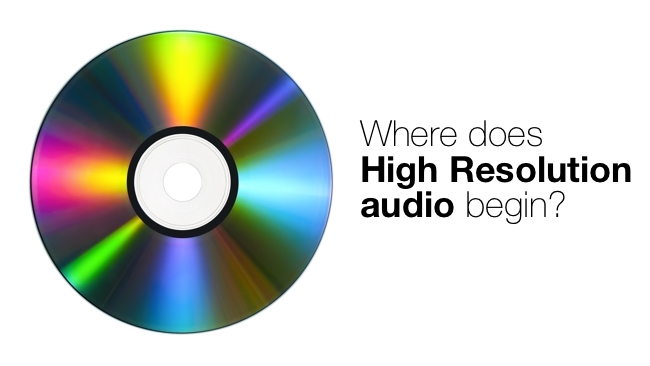 Where does High Resolution audio begin

The strangest thing has happened over the last couple of decades, as audio technology has improved almost beyond recognition. It sounds almost unbelievable to say this, but the quality of audio reproduction that we hear in our daily lives has got worse. There. I said it.

The culprit? Compression. Specifically, the type of compression that’s used to store audio with a smaller storage footprint, or that’s needed to stream audio over a connection with a limited bandwidth, which, until quite recently, was all of them.

Rather surprisingly, there’s an analogy here with organic food. We’ll come back to that in a minute.

Lossless compression is good and we don’t need to fear or avoid it.

Lossy compression is a very different matter. It damages audio. But it is very much more efficient at reducing data than lossless compression.

I want to avoid sounding over dramatic here, and being too critical of lossy compression. It does have a place, and it is very, very clever technology. Think back to where we were around the turn of the century. CD quality audio requires 1.4 megabits per second of bandwidth or storage. That may seem trivial compared to your 75 megabit broadband connection (I know - huge numbers of us don’t have that speed yet, but it is a widespread reality in cities and urban areas). Back then, no-one had that speed, and the only way to stream audio in real time, or to download it in a reasonable timeframe was to compress it. MP3 was able to compress audio by around eleven to one, and still sound recognisable. If you listened on mediocre speakers or just didn’t care, it was good enough.

But it wasn’t as good as CDs.

Remember that CDs themselves have been much maligned as sounding brittle and harsh - largely, I think, because the quality of the early consumer digital audio equipment wasn’t great. But MP3 files normally start with CD quality and downgrade it from there. It’s the same across a whole spectrum of audio formats and delivery channels: digital radio, online radio, iTunes, and digital satellite and terrestrial television. All of these degrade audio.

Most of the time, it’s a fair trade-off. It’s always going to be better to have some audio than no audio. It’s questionable, though, when quality is sacrificed for quantity (i.e. the number of channels) as is the case with digital radio in the UK, which effectively uses what would be called MP2. It’s a less efficient compression codec than even MP3. And here in the UK, we’re stuck with it.

So that’s the background. Let’s get back to the question at the beginning of this article: where does high resolution audio begin. And I have a, perhaps, surprising answer. It’s with the CD.

The specification of the CD format was designed to allow a reasonable playing time at a higher quality than vinyl. By and large, it does this. Most importantly, it uses linear PCM. It samples the music with a 16 bit depth, and at a sample rate that’s enough to allow most, if not all, of the frequencies that we can hear. That’s actually pretty good, and it’s way better than any lossy compressed format. Modern recordings (and many older ones) can make the most of the uncompressed format and are able to sound fantastic - to the extent that many people can’t easily notice higher sample rates.

So I would say that if we have to draw the line somewhere between higher resolution audio and “standard” quality audio, it’s with the CD. Yes, we can absolutely record and work with even better quality than CDs these days. But if you’re looking for better quality music files to listen to, start with the CD standard. Give it a chance. Listen to it and compare it with compressed formats. Don’t forget that it’s perfectly OK to store and playback CD quality audio with lossless compressed files like FLAC. Many audio enthusiasts and experts will probably disagree that CDs are the start of higher resolution audio. I don’t disagree with them but I’m just suggesting a newer definition that acknowledges the dominance of compressed formats. What I’m saying is a bit like the way we used to call organic food “food”.

You will probably find that with good equipment there’s a profound difference. And if it’s not profound enough, then you can move to even higher resolution formats, with greater bit depths and higher sample rates. You may even want to try DSD.

Most of all, remind yourself that we’ve moved backwards in the last fifteen years, and it doesn’t have to be that way.