The Eclipse TD-M1: the best desktop speakers you can get? 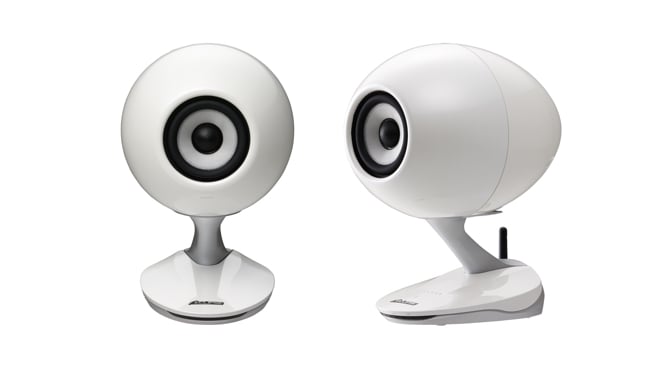 The Eclipse TD-M1s: a design classic in the making

RedShark Review: The Eclipse TD-M1 computer speaker set, a winning combination of design and sound quality that more than justifies their £800 price tag and would be at home in any edit suite.

Any doubts that a desktop loudspeaker can be worth nearly £800 vanish even without turning them on. The minute you take the TD-M1s out of the box, it's unambiguously apparent that they're something special.

Let's imagine that you have somehow been able to distill all the design cues from the last 30 years of science fiction films and used this knowledge to design a desktop loudspeaker system. This is what they'd look like. I'm certain of it. But these are more than just scenery.

For a start, they're solid; quite incredibly so. The egg shape is to avoid the usual diffraction effects caused by having the flat surface at the front of conventional loudspeakers. There's a single 8cm driver and the entire mechanism is isolated from the frame, so that there are no spurious resonances caused by the loudspeaker structure itself. All of this adds heft to a device that already looks and feels like a sculpture. I'm quite serious here: if you like beautiful objects, you will get almost as much pleasure from the TD-M1s when they're turned off as when they're on.

That's not to detract in any way from the sound of these loudspeakers. They do sound good, and – just like the way they look – they sound good in their own, unconventional way.

There's only a single driver in the TD-M1 enclosure. This is a bold design decision, because single drivers have a limited frequency range. It's the same reason that cars have gears. It's because engines are only efficient over a relatively narrow range of RPM. With cars, you have multiple gears; with speakers, you normally have multiple (at least two) drivers, each handling its own optimal set of frequencies. The drawback with this seemingly effective arrangement is that the electronics that feeds different frequencies to the right drivers also modifies the sound, messing with crucial information contained in the phase relationships of the audio. It's hard to overstate how significant this is for accurate audio reproduction.

By constraining the design to a single driver, Eclipse avoids this problem completely and the company goes to great lengths to explain why this is so good. Its explanation refers to an area of audio physics called an 'impulse response' and this is traditionally where it gets very complicated and hard to understand if you're not a mathematician. But, luckily, there are some easy ways to grasp what's going on here.

You can read the rest of the review (where David concludes "Are they worth the money? The more I live with them, the more I think they are.") over on our RedShark Sound sister site here: RedShark Review: Eclipse TD-M1 Desktop Speakers.