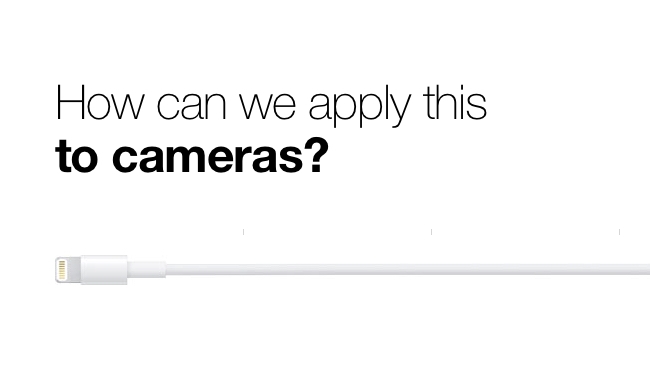 Rumours of a certain subtraction from the upcoming iPhone 7 raises some interesting questions for camera audio.

There are rumours (there are always rumors...) that Apple is going to delete the standard 3.5mm jack from its next iPhone, presumably called the iPhone 7. Apple is going to replace it with, well, nothing actually. The only remaining hole in the chassis will be the so-called Lightning Port. Traditional headphone users (that's everyone) are poised to be upset about this because it will mean that, from the launch of the new phone, nobody's headphones will work anymore.

Despite this, and also despite the fact that I really don't think the iPhone needs to be even thinner, I think this might be a good idea, for iPhone users and, ultimately, for camera users, too.

First of all, you won't need to throw your existing headphones away. There will be adaptors. Lots of them. Lightning ports output digital audio at 44.1 or 48 kHz, at 16 or 24 bits (as far as we can tell). Apple seems a bit cagey about releasing this information, so we got this from a third party product.

And the fact that the audio is available in digital form is good news if you want to use an external higher-quality digital-to-analogue converter. Even though traditional iPod/iPhone audio is compressed, it still helps if you can convert it back into analogue carefully. You could also rip your CDs to uncompressed audio and benefit from digital playback from your device (where this is legal). You may also be able to play higher sample rate audio or even DSD – if you have a suitable DAC (and these do exist).

Apple has a history of dropping well-known interfaces and devices as soon as they can imagine a world without them. It's even dropped Thunderbolt from the new Macbook, although we're not sure whether such a low-powered computer would have had Thunderbolt in the first place. Usually, the world continues to turn and people get used to it. It's arguably always good to have analogue audio around, because it's a dependable fall-back with no real compatibility issues, but the future is (and has been for a long time) with digital audio.

But couldn't Apple have used a standard connector, like TOSlink, SP-DIF or AES/EBU? Well, AES/EBU needs XLR connectors and you'd need to bend the laws of physics to fit one of those on an iPhone. SP-DIF is fine, and adaptable, but it only carries digital audio. These days, people expect more from their interfaces.

I do wonder why Apple hasn't moved to USB C, which, on the face of it, has much in common with Lightning, not least that it has a reversible connector. What USB does have is a very high potential bandwidth – which would allow multiple tracks of very high quality audio, but that's not going to be of much interest to headphone users.

But on a camera, why would you not want this? With USB C on a camera, you could transfer any audio format and any number of tracks, not to mention high-quality video as well.

The problem here is that when Apple adopts a new connector, it becomes a pseudo standard by virtue of Apple's sheer might and presence. This sometimes means that the rest of the world gets forgotten.

But let's take the idea of an easy-to-use, versatile digital audio connector as an inspiration to have something as good, if not better, on all our equipment.