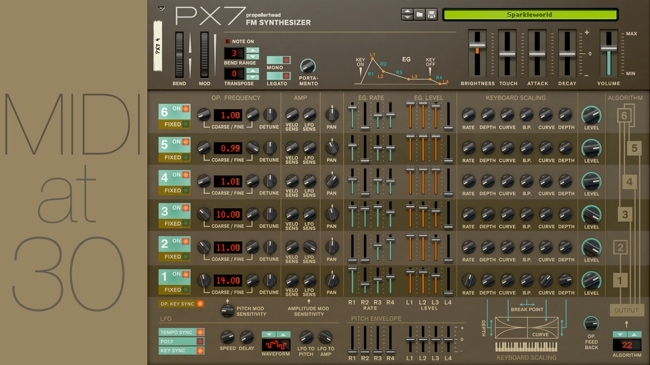 MIDI is 30 years old and showing no signs of obsolescence. Nor is the first instrument ever to support it: the Yamaha DX7

MIDI means "Musical Instrument Digital Interface" and that's exactly what it does.

You can take virtually any MIDI device and connect it to another - and it will just work. I remember connecting my DX7 keyboard to my Kork M1R rack module and - music! No setting up, no parameters to tweak, and no danger of earth-loops either because Midi is thoughtfully opto-isolated.

The dark side of MIDI? It uses DIN plugs: worst connector ever except Scart. And Ethernet.

MIDI opened up a whole new industry and a new class of software: MIDI sequencers. You could have them in hardware - with dedicated controls that were fast but sometimes too multi-functional - and the displays were often woefully inadequate - or you could run a sequencer on your DOS - based computer. If that sounds odd, let me assure you that once you learned the keystrokes there was nothing faster than Voyetra Sequencer Plus Gold, running on a '286 computer with a green CRT monitor.

In the mid 80s, when MIDI started to make musical waves, you simply couldn't mix midi and audio on a computer. There were a few six-figure sequencer/samplers from the likes of Fairlight and Synclavier that were able to handle real-time audio but they were out of the reach of most.

Very quickly, though, in just a matter of a few years, Audio found its way onto PCs and Macs and the Digital Audio Workstation was born. At last, you could edit real, CD quality audio on a simple desktop computer.

Real-time audio processing took longer to arrive. It's one thing to dumbly play back a data stream that represents right and left audio channels, but it's quite another to process it as audio, adding reverb, for example.

The arrival of the PCI bus allowed much faster and better cards to be plugged into PCs, and native CPU processing reached the point where not only could you process existing audio streams, but you could generate it as well.

Fast forward to today, and you have companies like Propellorhead, able to emulate a complete recording studio on a laptop. There is almost no better illustration (other than the departure of the slide rule from engineers' desks) of how far we've come in thirty years.

And with Perfect timing, you can now download a software emulation of my old Yamaha DX7 as a Reason Rack Extension - Propellorhead's user-friendly plug-in environment. And it's better in every way.

Sneakily named the PX7 to avoid any possible comparison with the original, this FM synthesiser actually is the keyboard sound of the eighties. From "Do they know it's Christmas" to almost the entire oeuvre of Gloria Estefan (with, perhaps, quite a bit of Korg M1 thrown in), this is probably the best way to create a genuine 80s feel in your soundtrack.

It keeps up with the times as well. It's the perfect way to generate a dubstep baseline for your next corporate video.

And what about MIDI and the PX7? Just plug any MIDI keyboard into your computer and the PX7 will play perfectly with it. Not bad after thirty years…