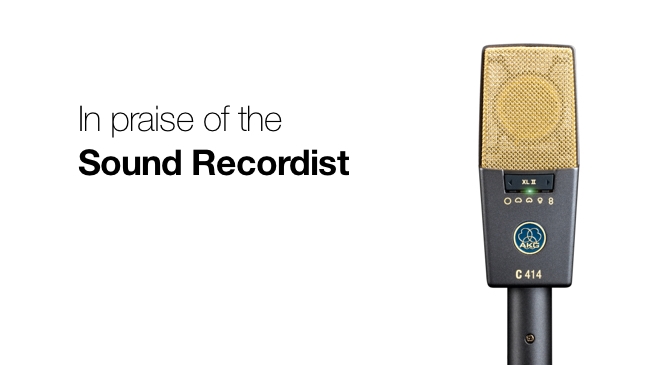 Replay: Now this may seem weird coming from someone who’s been a cameraman for most of his working life and maybe it’s bit late to make amends, but I think it is time to reassert the importance of the sound recordist.

In what is regarded as a visual medium, sound recordists are traditionally the butt of jokes (eg What’s the difference between a genny and a sound recordist? Answer - You can stop a genny whining). You can’t help feeling sorry for them — audio seems to have the lowest priority during a shoot but is the very first thing that people notice when it isn’t right; people will put up with fuzzy pictures better than they will put up with fuzzy sound.

Now with budgets squeezed (well, budgets for crews squeezed, I haven't seen so many producers in the dole queue) there is a trend to regard the sound recordist as dispensable. With the advent of low cost, good quality and reliable radio mics, it is all too easy to clip a mic onto the subject and think the job is done. And, to be honest, if you are mostly doing interviews a lot of the time that works okay. But it should go without saying that in any ‘real’ documentary situation (by that I mean, something that is not based just on interviews) a sound recordist is essential.

We need sound recordists. Not only is it great to have someone whose whole attention is concentrated on sound to not miss out on all the extraneous noises and rustle, but often a personal mic is a compromise. In so many situations, the classic 416 on a boompole is still the best way to record sound. The problem with personal mics is that everyone tends to sound the same, wherever they are in the room and however far they are from the camera. We lose sound perspective, we forget that the actual tonal quality of the sound can be almost as important as lighting in establishing mood.

With the rise of the DSLR, sound took second place to an obsession with picture quality but, because of the more or less unusable audio you get on a camera that is really designed to take still pictures, a separate sound recorder became commonplace again. However, ironically and unnecessarily, the recorder is now often attached to the camera.

Does having a recorder independent of the camera really make a difference? Certainly, from a camera operator’s point of view, to be able to take the camera and run with it without worrying about cables can be a huge advantage. But more than that, I think an autonomous sound recordist, freed from the umbilical connection to the camera, allows greater emphasis on the creative possibilities of sound. Sound should be a creative element in itself, not just something that comes with the picture.

Okay, sound recordists, do you forgive us for all those jokes now?