Headphones you can mix on 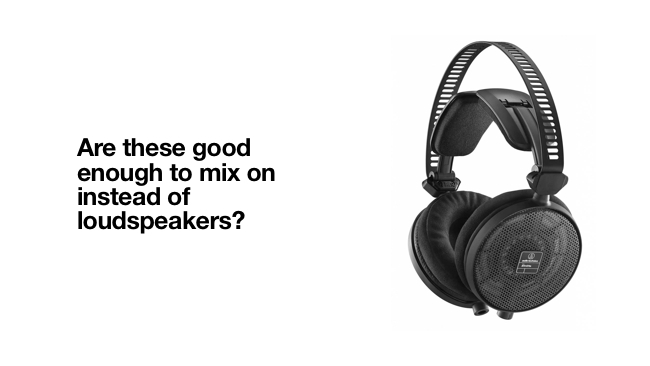 These audio reference headphones have an open back and are said by Audio Technica to be suitable for critical work like mixing. We like the sound of that. (Did you see what we did there?)

It never ceases to amaze me that audio products are still developed. Well away from the white heat of IT, "cutting edge" in audio often means using a new material for a loudspeaker cone, or a different way to direct the sound inside a loudspeaker.

This applies especially to headphones. I've been listening to brilliant sounding headphones for decades, so it's kind of surprising that new ear-mounted products seem to arrive all the time.

But it shouldn't be. Because new computer design and modelling techniques, along with the availability of better materials - some of them space-age composites - means that the headphone manufacturers always have something new to work with. Sometimes they make the sound even better; sometimes they just make the headphones lighter or more comfortable.

If you ignore consumer design trends which prioritise looking good while jogging over the absolute audio fidelity, then where the real science is going is into professional headphones.

You'll typically see these in recording studios, where the musicians wear them so that they can hear previously recorded tracks while they play, or other musicians in other isolated parts of the studio. The main characteristic of these phones - apart from sounding OK - is that they have to isolate the user from other sounds in the environment, and to stop their own sound escaping and leaking into other peoples ears and microphones.

These "closed" headphones have never been great for mixing audio. For critical listening, they tend to shut off user's ears from the environment, and they're generally less comfortable. They're particularly inadequate at replacing the feel and character of physical loudspeakers. While they can sound very good in themselves, they're not great for critical work.

Now, experienced headphone manufacturers Audio-Technica have announced the ATH-R70X, which is their first pair of open-backed "reference" headphones.  (The word "reference" is used in audio in a similar way to video: it's equipment you can judge the quality of the audio or video with.)

The headphones incorporate newly designed drives and an "aluminium honeycomb mesh" which gives the 'phones strength and rigidity. You normally find that the more rigid a loudspeaker or headphone, the better it will sound, as it is able to brace itself against the vibrations of the actual transducer.

Perhaps the most fascinating aspect of these new phones is that the Audio-Technica claims they are good enough to mix with. This is rare from a headphone manufacturer, but it is credible. Having an open back means that the user is more in touch with the environment outside the phones, and - a practical note - they're lighter as well; so they're comfortable for long periods.

Audiences are becoming more and more critical of audio for video, and these might be a good option for anyone in the field or who doesn't have the space for a good audio monitoring system while they're editing video.