Sony NW-ZX2 - Is an eye-watering price worth it for top-end digital audio? 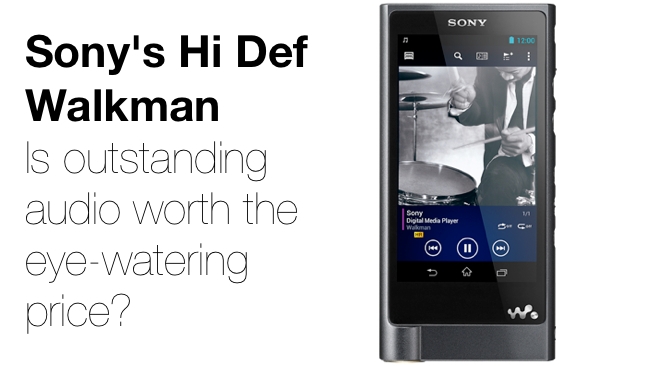 Equipment for reproducing high end audio - so that you can actually hear the difference - is expensive. Would you buy Sony's top-end Walkman?

You may find your eyes water when you look at the price of Sony’s new  HiRes Audio Walkman, but it’s not by any means a product that’s based on complete vanity. I would be tempted to buy one of these.

I’d be tempted because I’m kind-of fed up with degraded audio (and video for that matter). Yes, compression is a necessary evil, but at the point where we can store an hour or so of 4K media on a thumb drive, isn’t it time we used a little bit more of our abundant storage on high quality - uncompressed - audio?

The new Walkman might sound expensive, and, of course, it is. But it is in a very different class of product to the recently announced Stellar II from Hasselblad, which may well be a fine thing, but it’s not going to give cutting-edge performance, which Hasselblad admit themselves.

Good audio costs more because so much depends on the quality of the components. Even if it is brought to your ears through a digital format, those flaps on the side of your head are analogue, and it’s in the analogue domain that you have to take the most care.

Early adverts for digital audio products promised “perfect audio, for ever”, and it’s very clear that the reality has turned out to be different from that. For a start, the process of digitising audio damages it. You can’t argue with that. There is no process in the universe that can make digital audio sound better than the original.

But what digitisation can do is preserve the quality of the recording once it’s been digitised. That part is easy. Imagine you had to give your telephone number to someone by singing a different pitch to represent each digit. It would be full of mistakes. What’s more, with each successive attempt to pass the number on, there would be more errors. Luckily, using writing and speech, we can represent the exact numbers. If you say “seven” to someone, they will understand that you’re passing on the concept of “seven-ness”. As long as each part of the signal chain understands the concept of numbers, there won’t be any degradation.

Just like with digital video, digital audio can be compressed in various ways, or not compressed at all. A higher sample rate is better, as well as more bits. 24 bits is much better than 16 bits, and 192 KHz sampling is much better than 44.1 Khz. Sony’s DSD audio is probably a better way to store audio than linear PCM (this is a technical area that we won’t get into here but - to vastly over simplify - a DSD stream is comparable in some ways to analogue audio - but can be perfectly copied and preserved).

Compressing audio is - measured against perfection - a bad thing. It reduces quality and the more you do it the worse the sound gets. What is remarkable is how good it can be, and for many purposes, good old MP3 is perfectly adequate.

But this type of audio compression has in a way self-justified itself because the equipment used to reproduce it, generally, isn’t actually very good. It’s tempting to think that the extent to which it’s not very good is the same extent that is needed to mask the bad effects of compression. By lowering the quality of the playback equipment, you’re  lowering expectations of quality too.

We’re in a position to benefit in a very tangible way from Moore’s law here. Flash memory is now cheap enough that even the highest resolution uncompressed audio isn’t a problem in a portable device. Using battery power is a positive advantage, because there’s no mains hum to smooth out. No earth loops either.

Good digital audio is a given. Turning it into analogue cleanly costs money. Even high end headphone amps can cost thousands. So If great-sounding audio is important to you, then you won’t mind the price so much.

But try it first. Make sure that it makes a difference for you.