In space, no-one can hear... dialogue 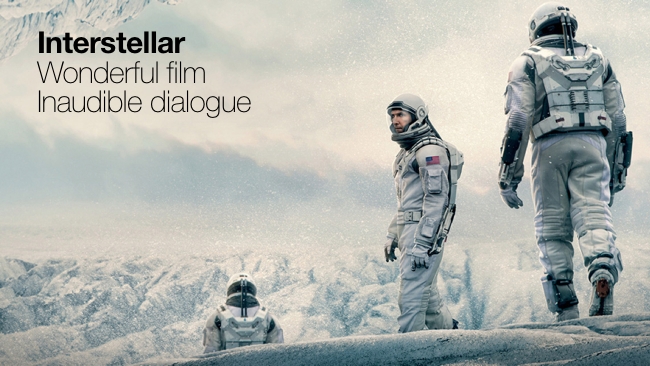 What was that you just said? Modern films are being ruined by unintelligible dialogue

I was on my way back from a trade show last week. It was an eight hour flight and I spent some time wondering whether I should watch Interstellar on the in-flight entertainment system. The airline concerned, Emirates, is very good and the planes are wonderful. This one was an Airbus A380, the double decker one, and even though I was in whatever they call Lower Class, my seat was refreshingly wide.

The movie screens were good too: proper 16:9 aspect ratio and had a decidedly better resolution than the displays you find on a lot of other airlines, which have all the charisma of multimedia kiosk from the 1990s.

I really enjoy long flights. It's quality reading time. No WiFi or cellular signal makes this a special place. I don't know what that says about my lifestyle but the bottom line is that I didn't know whether I wanted to spend the best part of three hours watching a film that should really be seen in the cinema.

In the end, I decided that that I really needed to see such an important and acclaimed work. If my family wanted to see it later, I wouldn't mind watching it again.

So I selected it, and adopted a suitably slouched position in my seat.

It looked really great. The only, trivial, minor thing wrong with it is that I couldn't hear the dialogue. The A380 is a pretty quiet plane, but it's not so silent that it doesn't cause a problem if you're trying to decipher the words of an actor who could mumble for his country. I tried turning it up. This just made the other actors painfully loud but did nothing whatsoever to make the words of Matthew McConaughey intelligible.

I tried and I tried. I watched it for an hour and a half, and all the time my comprehension of  the plot drifted off course like a space probe whose gyroscopes had seized up.

In the end, I gave up. I wasn't enjoying it. I was frustrated. I thought "this must be what it's like to be deaf". Well, actually, I am a bit deaf. Too many years playing in loud bands, probably. But the point is I could hear the other actors!

So, I'd just like to add my voice to the growing number of people (including these top dubbing mixers from the UK) who say there are three rules for mixing audio for films: "Intelligibility, Intelligibility and Intelligibility".