Dolby Atmos on a telephone! 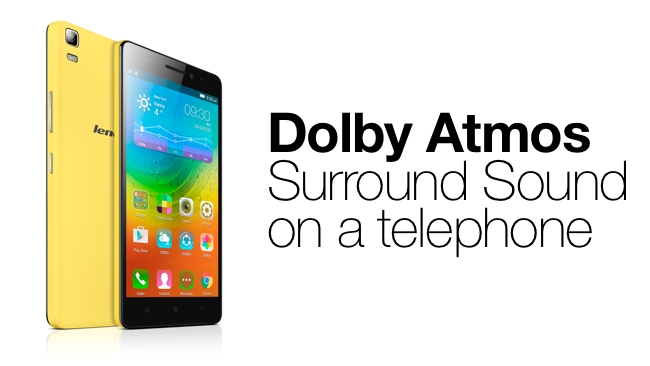 Dolby Atmos on a telephone: Lenovo A7000

What does surround sound have to do with telephones? This:

Dolby Atmos is impressive. In a cinema, audio can be placed with precision anywhere within a three dimensional space. It makes it sound like there are real objects flying around you. More and more films are being mixed for Atmos and you'll hear it in an increasing number of theatres too. Everything about it says "big cinema experience".

So with that in mind it's rather surprising to hear that it's now available on mobile phones. That's right: you can now get this flavour of surround sound on a telephone.

How this works is kind of hard to imagine, because on the one hand you have a cinema with dozens of accurately placed speakers, and on the other, you have a smartphone and a pair of headphones.

Dolby isn't giving much away about how they do this:

"With the new Lenovo smartphone and tablets with Dolby Atmos, users can expect to hear rich and powerful sounds coming from all directions, including overhead. When the listener puts on headphones, the action comes alive as an arrow shoots overhead, a heavy rainstorm pours down from above, and a race car screeches around the corner, all with incredible realism, making listeners feel like they’re inside the action."

But there are some very clever things that you can do with digital signal processing and with a knowledge of how the brain perceives directional sound. It's a fair bet that the phone is taking the audio plus directional metadata and processing this to give a multi-directional soundscape from a pair of headphones.

It may be that they're using the theory behind a much simpler technique that works extremely well: Binaural audio. It's simpler because all it takes to play it back is a pair of headphones - with no additional processing - and, to record it, a "dummy head", which is, literally, a model of a head with some microphones where the ears are. The shape of the head and the precise placement of the ears preserves the relationship between the sounds heard by real ears in a real head. So when it's placed back, all the subtle phase and directional information in the original situation is reproduced, very convincingly.

We suspect that Dolby has codified these spacial and phase relationships and converts its precision-placed sounds into what is effectively binaural audio using clever DSP algorithms. Don't take our word on this - we'll try to get more info from Dolby but this may be one of those techniques that they want to keep under wraps.

As soon as we get hold of one of these phones, we'll report back