"The sound of vinyl" is just an effect. Here's the proof. 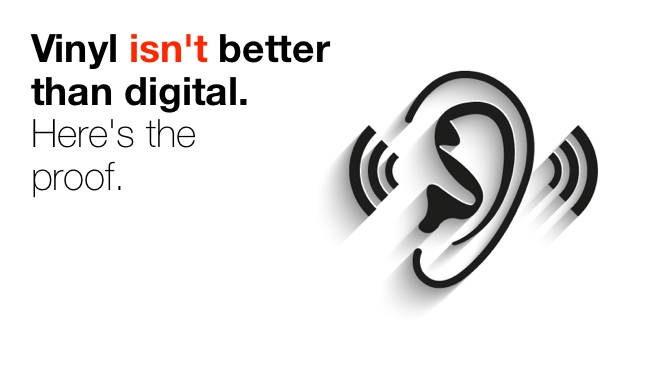 RedShark Replay: Recently there's been a resurgence in sales of vinyl records. We don't really know why. And we think we can prove that vinyl isn't better than digital. Here's how.

We've spent a lot of time talking about whether film is better than video, and whether vinyl is better than digital audio. So much so that you'd think there isn't much more to say on the subject.

Well, first of all, I think there's always something to be said about it. After all, digitisation is the most crucial stage in the creation of digital media (except computer-generated animations, of course - and even these have to be turned back into analogue if we're going to be able to see them!). It's what turns the minuscule scintillations from microphones and image sensors into numbers that we can manipulate and store accurately.

(Just parenthetically, I want to say here that digits don't automatically mean harsh, unsubtle blocky video or audio. With enough of them - 14 bits per colour channel for example, or 32 bit floating point audio, digital can convey far more subtle information about the world than any system that has proceeded it).

But while a lot of what we talk about when we're discussing this is subjective, some of it isn't. Because we can do tests and experiments that at least prove something. What's more, it's the logical structure of these tests that is as important as the subjective assessment of them. I promise that's the most abstract statement you're going to read in this article. So let's move on to the practical details.

What I'm going to stay here applies as much to Film vs Video (when I say video, I mean digital video here!) as it does to Analogue vs Vinyl, but, experimentally, it's probably easier to talk about the audio version of the experiment.

There will be a lot of readers who will disagree with me as they read this. That's OK. I'm not being dogmatic here. I'm just saying how things seem to me. Please, let me know what you think in the comments.

So, here's where we start from. We need to tie a few things down before we get into the nitty-gritty of the experiment, which is actually a very simple one. 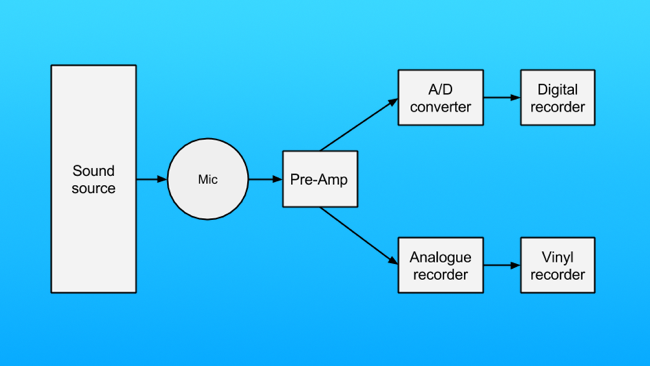 Let's be clear about what we mean

Let's start by being clear about terms. Often, when we're talking about audio, people use the terms "Analogue" and "Vinyl" interchangeably, which can be confusing. Vinyl is an analogue medium, but there are other analogue media, like analogue tape.

In fact, it's probably fair to say that the very best analogue tape sounds far better than the best vinyl recording has ever done. It stands to reason: unless a recording is cut directly to disk (and some were and are) then tape will be the intermediary. And analogue tape can sound very good indeed.

If you've never heard studio quality tape recordings, then you might think that tape is hissy and dull. The very best studio recordings (probably using Dolby SR) were superb, and to this day, subjectively, probably can't be bettered, except by high resolution digital recording.

Studio tape recordings sound good because the tape is wide and is run at a high speed. With these conditions, the signal to noise ratio is superb, as is the frequency response.

Vinyl, on the other hand, has a restricted frequency response, dynamic range (if it were too big, the needle would jump out of the groove) and quality that changes from the outer to the inner part of the record.

So, let's focus on Vinyl first. People say that it sounds better than digital, a phrase that, without qualification, is almost meaningless.

Here's a way to make it meaningful, though.

Nobody (well almost nobody) is going to disagree with the idea that the original sound is the best. Let's say it's a jazz group or an orchestra, or a solo guitarist or a rock band. There is no known law of the universe that is going to make a recording sound better than the original.

Well, actually, it might, but not for the purposes of this test, and only in the very narrow sense that the recording might make the sound "sweeter" in some way: a tailing off of high frequencies, mild dynamic range compression, or any number of phenomena that might change the sound in a way that we find pleasing.

But it is certainly not going to be more "accurate" than the original. That would be a logical impossibility.

So here's what I suggest. Let's have a live sound source - any of the above - and record it in two ways. First, via analogue tape and then to vinyl. Second, direct to a digital recorder, capturing at 24 bits and at 192KHz sampling frequency. The to recordings should happen simultaneously, fed from the same microphones. (Any mixing should be done in the analogue domain for the vinyl, and through a digital mixer, with a digital output to the digital recorder.) The digital mixer should be running at the same bit-depth (ie 24 bits - or even 32 bit floating point) and sample rate  as the recorder. Analogue to digital conversion should be via a top-end converter like this one that we mentioned in RedShark recently.

Essentially, this is what it's supposed to show. People who say that vinyl sounds better than digital will have to be able to explain this.

So which will sound better?

The digital one, of course. They will sound different, and the sound from the vinyl record certainly won't be unpleasant if it's recorded well. But by any objective and subjective measure, it will sound worse than the digital one.

To complete this logical loop, let's cut a vinyl disk from the digital recording (remember that this is the best digital recording that science and technology can currently provide, which means that it will be very good indeed).

I'm pretty certain that the digital source will be so close to the original source, that a vinyl recording cut from it will be indistinguishable from the pure source.

But that's not the point. The point is that digital recording is vastly better than reproduction via vinyl.

Now there are a few things still to say at this point.

I believe that the "vinyl" sound is like an effect that we can add to a recording. I think if we added a "vinyl" effect to a very good digital digital recording it would be indistinguishable from an original vinyl recording. There's nothing wrong with liking the "vinyl" sound: this is exactly why amateur photographers and some professional ones like Instagram. It's exactly why film directors specify a certain "look" to their works. It's exactly why musicians like to play their guitars through a certain manufacturer's amplifier - however "dirty" or distorted.

No, there's absolutely nothing wrong with this. It's only when proponents of a certain analogue "sound" feel so strongly that they start denying the feasibility of a really good digital recording that it becomes a problem.

I suspect the whole "vinyl vs digital" thing started in the early days of CDs when, for several reasons, the quality of CD listening was nothing like it is today. For a start, if you make a digital recording using only 16 bits (the bit-depth of a CD) then you have to leave at least four bits "headroom" to cope with unexpected peaks. Which means that most of the time your recording will have a maximum resolution of only 12 bits.

Early D/A converters weren't very good. They had a nasty, harsh, brittle sound to them, and most of them weren't true 16 bit either.

For these and many other reasons, listening to early CDs wasn't great, although the silky digital silence between tracks was a revelation, because however good a vinyl recording might be, there will still be crackles and pops. It's worth remembering that if you have a single click or pop in a digital recording, it's considered to be ruined. With vinyl, you get clicks and pops every second (on a typical, slightly worn record).

But the CD format is far from useless if it's used properly.

If you make your master recording in 24 bits, you have the headroom available to make a "proper" 16 bit recording, which will give you a dynamic range of 96dB - far in excess of vinyl's approximately 72dB.

Frequency response? Well, Vinyl's going to struggle in comparison with a CD. Where vinyl does have an advantage, some would say, is where it is able to gracefully degrade its high frequency output so there's no sudden drop-off. It's all very "natural". Not so with early CD players, or their A/D converters more specifically. In order to prevent audible aliasing (where there are frequencies in the output that have no harmonic relationship to the wanted sounds) it used to be essential to impose a "brick wall" filter, which, unfortunately, used to introduce all sorts of other unpleasant audible artefacts.

Today's converters are much better

These days, though, D/A converters are much better. They have better precision components and typically "oversample" so that the filtering can take place well away from the audio spectrum.

Now, what if we were to master a vinyl record from the digital recording in our diagram above? I'm willing to bet that it would sound exactly the same. What I mean by this is that it would be indistinguishable from a recording direct from the source. There simply isn't enough resolution or subtlety in the mechanical playback system to render audible the difference between a 24 bit 192 KHz recording and the actual sound source.

I know people will disagree with me. They will say that their ears tell them something different.

But it's not their ears. It's their brains, or, more specifically, their cognitive systems. If there's something in our brain that's telling us things are not the way they seem, then there's not much we can do about it. I can't disagree with or disprove what you're hearing. If your brain sets a flag that says "every time I hear the crackles and pops form a vinyl record I'm going to think that I'm hearing "better" sound. There's nothing I can do about that. It's like a phobia: if you don't like spiders, then no amount of reassurance is going to make a difference.

But what I do have in my favour is the above test. And I'm willing to bet the results of that against any amount of subjectivity.

What's more, I think it proves that Vinyl is really just an effect. It's like a "look" that we might apply to a film. It's a trigger to our brains that makes us say that "this sounds great". But ultimately, like all effects, in comparison with the original source, it degrades the quality of the material.