Free Pro Tools: Just what does it mean for the Pro Audio industry? 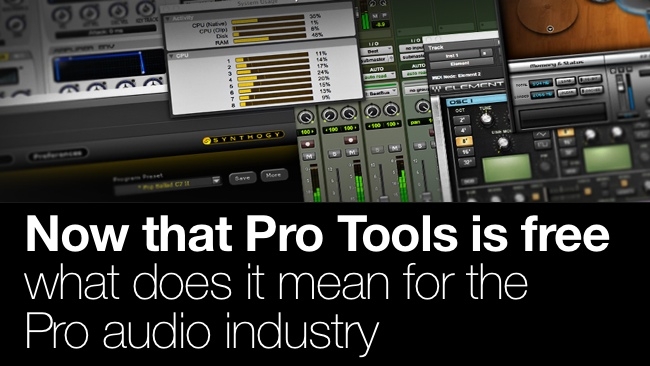 Now that there's a freemium version of Pro Tools soon to be released, what are the implications for the rest of the audio industry? In one word: seismic.

Avid is right to claim that  “Pro Tools is the audio workstation that redefined the music and post production industries”. It arguably has a similar status in the audio industry to Avid's Media Composer in film, video and TV - absolutely the first choice for a large number of top-end facilities.  But it also has competitors, which, in their own way, are revolutionary as well: it all depends on which direction you're coming from.

For example, Ableton Live has revolutionised live performance and loop-based composition. Reason can claim to be the ultimate virtual studio - not least because of the gorgeous graphics and the "it just looks like the real thing" user interface. Meanwhile Reaper is collecting accolades as a very low cost alternative and is very impressive.

But for sheer ubiquity as the professional DAW of choice for both recording studios and for audio dubbing and mixing editors, Pro Tools has an enviably solid position at the top of the tree.

An ecosystem of plug-ins, hardware I/O and control surfaces

There's a whole ecosystem of plug-ins, hardware I/O and especially physical control surfaces available for it too. Avid's purchase of Euphonix some years ago injected some very smart design ideas and, if you're primarily a video editor, it's quite possible you don't realise quite how dominant in Pro Audio Avid has become over the last decade or so.

Now that a version of ProTools is going to be available free of charge, we can expect to see some changes in the audio industry the magnitude of which will verge on seismic.

It's all part of a long, and for some, painful process that's been happening for some time now, where the way that software is sold has changed and the price you have to pay for it has plummeted.

Does a free version of Pro Tools make sense from a business point of view?

The big questions for software sellers is whether the "freemium" model is going to be profitable or even sustainable. I think it probably is. The idea is that you give away your product with enough functionality to be - at least a bit - useful, without giving away the crown jewels. There's no point in having a free product that doesn't do anything, or at least so little that it's frustrating to use.

So how much do you leave in? It has to be enough to let users create and finish a project, perhaps with limited output options, and definitely with some features missing that you would need if you were using the product commercially. Why? Because if a user is making a living from a product, it makes the conversation as to how much they should pay for it much easier.

So I think we now have a clear view of the new software commercial landscape. Some software is still only available at a full price as a once-only download. Some is now free: Resolve, Fusion, ProTools etc. Some is available on a subscription - the most notable of which is Adobe's Creative Cloud.  And some, like Lightworks, mixes these models.

But it is Freemium and subscription that will dominate. Subscription lowers the barrier to entry and gives access to the full product at a low - hopefully affordable, recurring cost. Freemium removes the barrier completely but you to have to pay for some features that may become essential to you. Outright purchase is still favoured by many, but this method of buying software, surely, will eventually fade away as the pace of software development increases, and - this is a really important point - support for new codecs, OSs and platforms becomes and almost everyday issue.

This is just a personal feeling and I know that a lot of people disagree with me on this: I think that absolutely the worst way to buy software - these days - is to "buy" it outright. Software can be out of date within weeks in the current climate of change and rapid technological progress. Freemium models have already revolutuonised the games industry - 85% of all mobile platform games are now powered by it - and it's a buiness plan that definitely works elsewhere too.

Either subscription or freemium are good - if they're done fairly and openly and are well-priced. And they both exist predicated on the notion that if you are using software professionally, it is actually good to pay for it. It funds development and it ensures that you're always up to date. I think objections around security and the possibility that you might be "locked out" of your software if, for example, you've lost your internet connection, are valid - but this is a different argument from one that says you should pay a fair price for what is, after all, a complex and complete professional tool.

Ultimately, if, as a manufacturer of software, if you can persuade the maximum number of people to use your products, to invest time in getting to know them, and to seed their potential for earning money from it, then you stand a good chance that enough - or more than enough - users will upgrade their purchases to the full versions, and keep the highly beneficial cycle of development and sales going ad-infinitum into the future.  And why wouldn't they want to pay if the costs are reasonable, which they can be, as a subscription?

It will be interesting to see how other software manufacturers in the pro audio business react to this. It is a disruptive move and it may encourage - or force - others to follow. Brand and product loyalty will be a damping factor in this. You're not likely to ditch several years of investment in knowing a product inside-out in order to move to another, cheaper one.

But for anyone just coming in to the business, making a choice just became easier and harder at the same time.

(And just by the way: does this mean that we're going to see a free version of Media Composer? NAB 2015 is coming up after all...)