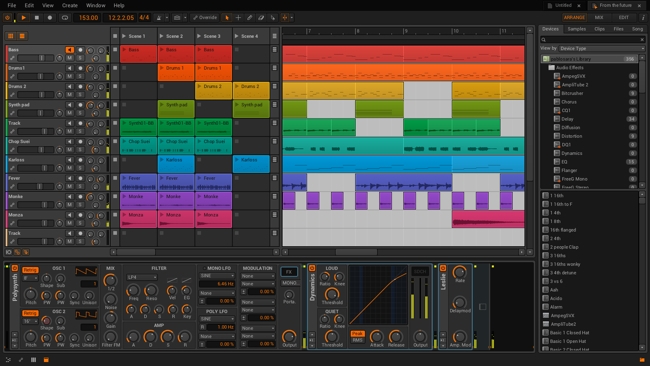 While technology advances at a pace that few of us can readily match, history shows that not everything that is announced comes to fruition straight away.

Trade shows the world over are (figuratively) littered with new products that promise to ‘ship soon’ but will actually not be delivered until years later.

I won’t name names, you can probably think of your own examples. Sometimes this generates publicity and hype. Sometimes it just frustrates and annoys.

Fortunately, on the odd occasion - to paraphrase a well-known brand of alcoholic beverage - good things do come to those who wait.

New music creation, recording and performance platform Bitwig Studio is an example of that.

First touted via a teaser video in January 2012, the Berlin-developed DAW was finally brought to market in March 2014.

No one is quite sure what happened in the preceding two years but one thing is clear: the results are noteworthy.

Bitwig Studio runs on three (yes three) platforms: Windows and OSX, obviously, but also Linux. This is fairly unique and while Linux users won’t be used to paying for their software, it may open the floodgates for further development in this area (that’s a big hint for you plugin folk by the way).

The DAW market is fairly crowded but there are things about Bitwig Studio that make it stand out.

Priced at $399 it is cheaper than Ableton Live, the product that it most keenly resembles, and it has a features set that will not just appeal to music producers but should also be of interest to sound designers too.

Out of the box you get 50 'devices’ - including instruments, sound effects and a whole lot more - but perhaps more importantly there are unique features of note such as the Clip Arranger, Unified Parameter Modulation and built-In Javascript controller API.

At the same time you can run 32bit plugins alongside your 64 bit ones. No jbridge required here. Plug-ins also run in parallel to the sequencer which means that if one crashes, the DAW won’t.

As you would expect from a product developed by people previously involved with ableton Live, Bitwig Studio has a clean GUI and is very easy on the eye. Plus, you can hide the tools and features you are not using.

The company themselves describe it thus: “Combining traditional arrangement sequencing with modern performance-oriented clip launching workflows, Bitwig Studio is the ultimate solution for realizing all your musical ideas across every stage of production.”

I don’t know if that is true but after two years of teasing, there is certainly something about Bitwig Studio that merits a look.