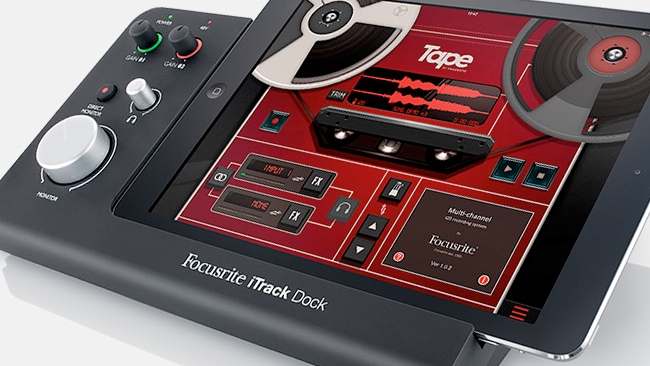 With the Focusrite iTrack iPod dock, you can make studio-quality recordings with your iPad

The biggest deal for me with the iPad has always been that there's no I/O. I don't mean SDI or SP/DIF or AES/ABU, but there's not even a USB connection, well, not without a special Apple Adaptor.

There have been a few non-Apple adaptors that have allowed you to connect cameras or even Midi instruments, and of course, there's always been a headphone socket, but for all the power and elegance of the iPad, it's a pain to get stuff onto it and from it.

Which is a huge pity because there are some outstanding applications for musicians and audio practitioners. But how do you use them in the real world? Where do you plug your XLR microphone cable in?

The answer is that you need a pre-amp. And there are few pre-amp manufacturers around with a better reputation than Focusrite.

Focusrite knows how to make Pre-Amps

Their new iTrack Dock is a recording interface that you don't plug into the iPad: you plug the iPad into it.

There's always a whiff of concern about iPad docks because they are reduced to the status of paperweights if there's the slightest change in Apple's proprietary connector, but the iTrack Dock comes with a Lightening interface, which is relatively new, and will work with any suitably-fitted iPad - ie one with a Lightening connector socket.

Once you slot your iPad into the iTrack dock, you're ready to go with just about any audio application, which will then accept inputs from mic and line sources, in as well as providing monitor and headphone outputs.

Once you have a decent interface, a modern iPad (there's something slightly odd about that phrase) has all the power and headroom for recording at the highest quality, and it has a big advantage over a typical (though not all) laptop: there's no fan. It's as silent as you need it to be.

We like this idea. If we could sing and play like the amazing guy in the video, we'd definitely get one.

Demo video and full specs over the page

Here's RedShark's review of Auria, a powerful Ipad Digital Audio Workstation which works (we think!) with the Focusrite iTrack Dock