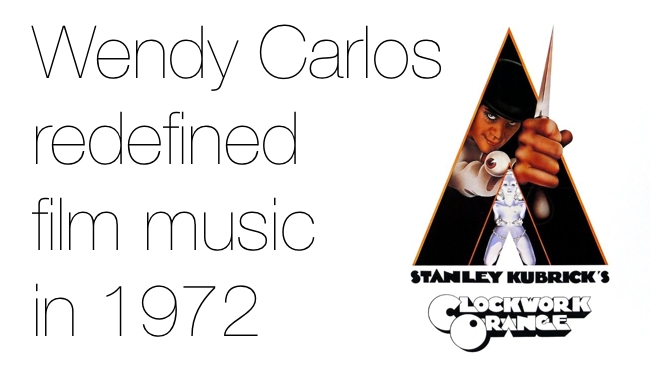 1972 was a great year for synthesiser music. Some of the greatest electronic music performances ever come from this year

Although the early seventies are seen in hindsight as something of "the dark ages" for musical innovation - a state of affairs that was responsible for the birth of Punk in the latter part of the decade, it was something of a Cretaceous period for electronic music.

The Cretaceous period saw the extremely rapid evolution of complex life forms, many of which were to die out rapidly, but several of which are still recognisable in today's fauna. In 1972 it was like that with synthesisers. And we hear echoes from that year today across the spectrum from Electronic Dance Music (EDM) to film soundtracks.

Two artists stand head and shoulders above the rest in my mind: Stevie Wonder with his unquantifiably groundbreaking album "Talking Book", and Wendy Carlos' Clockwork Orange.

One track in particular from the Orange album captivated me as a child, and was almost solely responsible for my lifelong fascination with electronic music. It's Carlos' version of the last movement of Beethoven's 9th symphony, created entirely with analogue synthesisers of the time.

One thing that stands out about this track is that Beethoven's 9th is, of course, the "Choral" symphony. This made an already complex piece even more of a challenge.

Carlos used a device that predated the now well-known sound of the Vocoder, called a Spectrum Follower, which extracted the acoustic spectrum from speech and superimposed it onto a "Carrier" tone from a synth, such that the tone appeared to be singing. This unearthly sound, coupled with Beethoven's music, is one of the highlights of the 20th century for me - just three years after the moon landing, and without any help whatsoever from computer sequencers.

I'm sure there's an analogy here somewhere between film and digital cinematography.

Here's the track. I suggest you listen to it with headphones, and have the volume up. Just be aware that it starts quietly and ends in a powerful climax. Seven minutes and eight seconds of transcendent analogue synth and proto-vocoder greatness.

Update: since we published this, the recording has been taken down from YouTube due to a "copyright claim". Pity. If we find another source, we'll link to it, and, of course, you can buy the record. The original (and make sure it is the original) record is available on Amazon

2nd Update: It's also available from Last FM, where it's free (I think) but you have to take a minute to set up an account. Well worth it for this glorious music!

3rd Update: It seems we're not the first to be affected by this. I'm a firm believer in copyright, and copyright owners can do whatever they like with their music, but it's a pity that so many potential buyers of Wendy Carlos' music won't be able to hear it in order to get hooked in the first place! Note that we didn't infringe anyone's copyright - all we did was link to an example of Wendy Carlos' music that had been on YouTube for ages - until we drew attention to it.