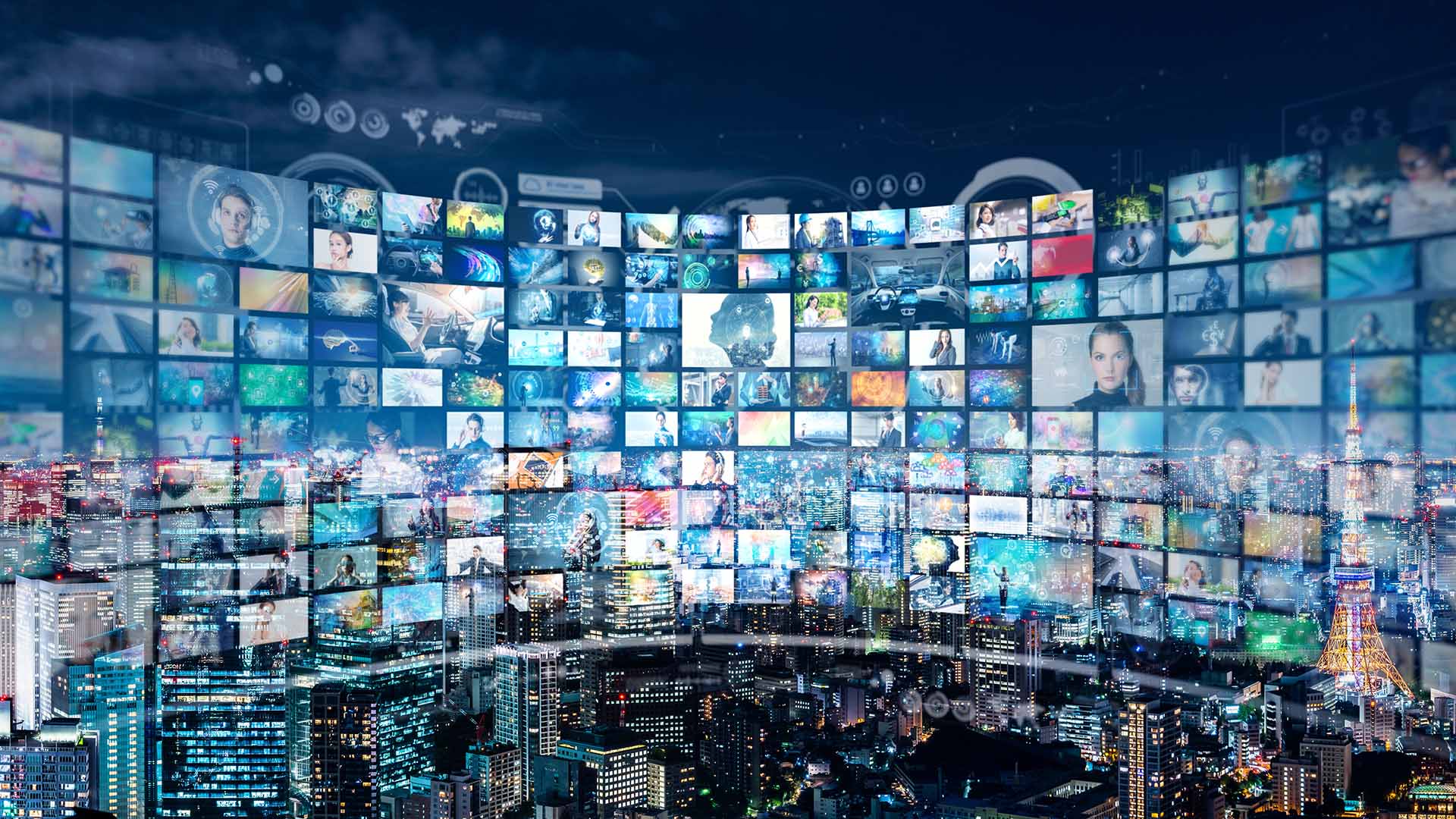 The word Archive is actually very old. The Romans called a building where they stored scripture rolls that were no longer needed for daily work “archivum”. Today´s digital file archive does the same. It holds all finalized productions, projects and assets in one place. This way it becomes the only place to look for finalized files. This is what is called a "Single Source of Truth“.

Let´s have a look at what is not an Archive.

Misunderstandings of what an Archive is

These examples put files at risk and become obstacles along the way. A professional media archive has some requirements to provide robust protection and access over a long time.

Basic principles when planning an Archive

If multiple persons are required to archive and/or restore, including their perspective early on improves the project. The workflow will profit immensely from multiple perspectives.

Metadata as key to the Archive

When years later files of a specific type, content or production are needed, metadata play an important part. Metadata describes the kind and contents of the actual files: What was captured, where and how? With a keyword, technical specifics or a description, files are a lot easier to find.

There are two kinds of metadata; technical and descriptive.

Often, recorders and cameras create technical metadata. These might include camera make and model, resolution, lens etc. Descriptive metadata describes who or what was captured, why and for what project etc.

While technical metadata can be imported from a file, descriptive metadata has to be entered manually.

It is important to understand that tasks around archiving, due to their long-term implications, need awareness and responsibility. Any inconsistency or errors make finding files later more difficult or even impossible.

The file name can keep metadata

The filename is the most robust and simplest place for metadata. Important criteria and parameters can have their place here. This can survive transport from one platform to another or migration between storage generations. Even reassigning a misplaced file becomes easier this way.

Not all operating and file systems support the same characters. Avoiding incompatible characters is therefore important.

Some OS systems replace blanks with “%20” making reading filenames that contain them difficult. That´s why blanks should be replaced by  “_” (underscore) such as when used to separate categories as per the example below.

Copyright © and Trademark TM are other characters that are not supported on some platforms. To keep things simple capitalization should be avoided, too.

If the date is important for production it should be included in the filename. To enable easy sorting, the technical date format is the most helpful, and should be placed at the beginning of the filename.

YEAR-MONTH-DAY with the year in four digits:

For the same reason, all numbers should contain leading zeros for their maximum number of digits. Misunderstandings with big numbers can be avoided this way. It makes sense to be generous and think ahead concerning the number of leading zeros because they cannot be adjusted later without conflicts, e.g.:

Creating metadata on the Mac

Unknown to many people is the ability to re-name multiple files in one step.

After selecting multiple files (with similar content or criteria) go to the File menu and choose "Rename ... Items“.

This way you can easily add a keyword or description to a filename while keeping the leading number. This is a quick and efficient way to structure folders containing many files. All added keywords could later be used in a search. 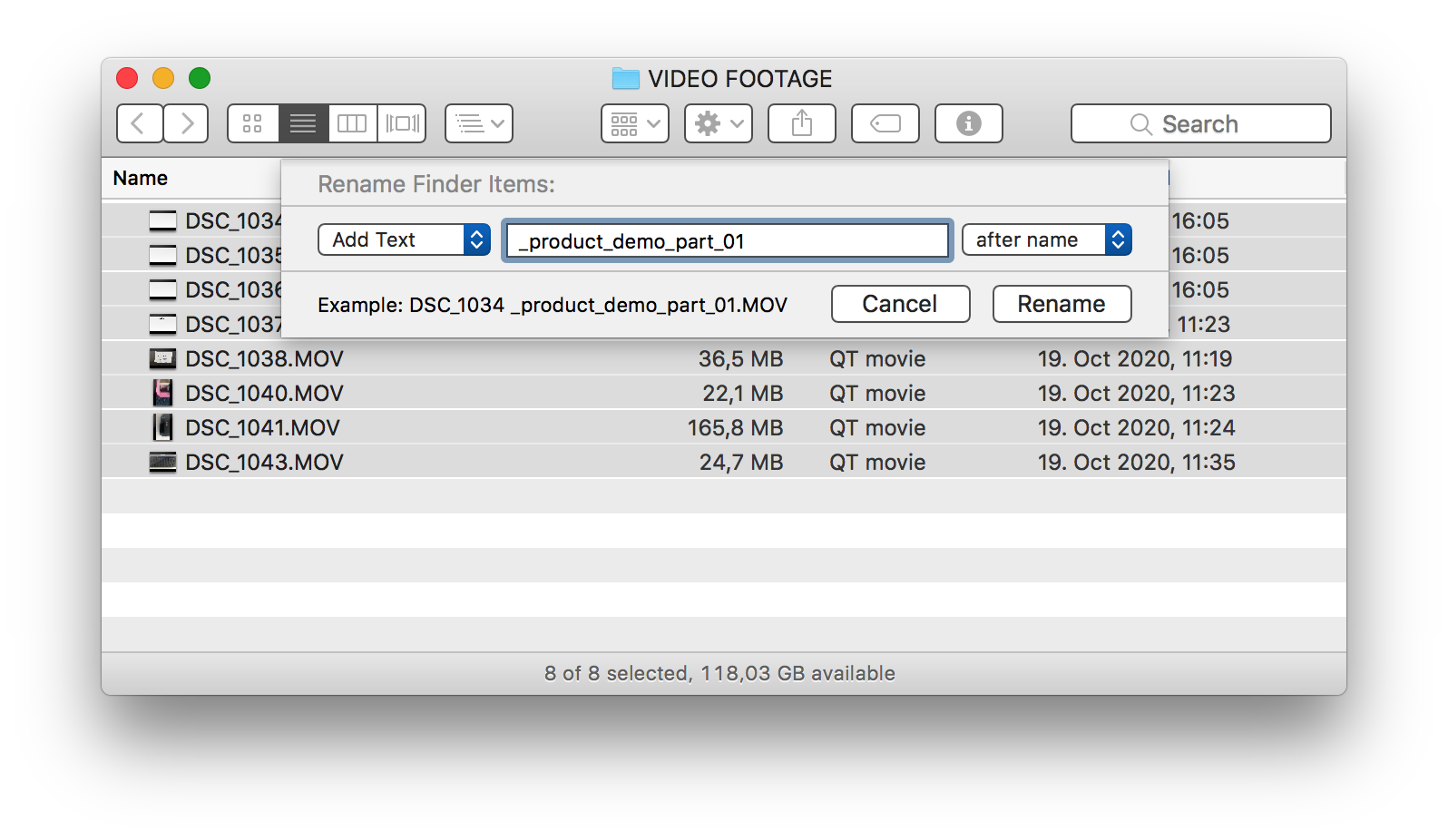 Re-name files in the Finder.

The collection of metadata categories is individual for each production or company. Every company has its own focus that needs to be accommodated to enable productive work with the archive later.

Check available metadata on a Mac

In the file header of each file, metadata is stored. This can easily be made visible on the Mac using the terminal.

All metadata in the file headers can automatically be imported into the metadata fields of the already mentioned P5 Archive.

Here´s how to expose the metadata: 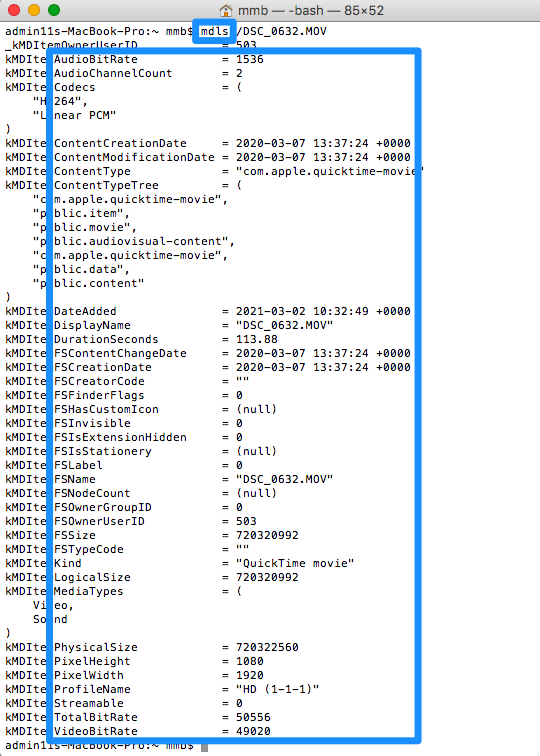 Example of a metadata scheme

As real-world example I've used the P5 data management platform by Archiware. One product is P5 Archive, the module for file and media archiving. Within P5 Archive one can easily build an individual metadata schema that can contain text fields and menus. They can be searched later.

Since media archives and asset collections can reach a tremendous size, while each file might be accessed only rarely, archiving pays off. For the same reason LTO tape offers many benefits and reduces storage cost. It has a shelf life of decades and is extremely cheap. More on that later. 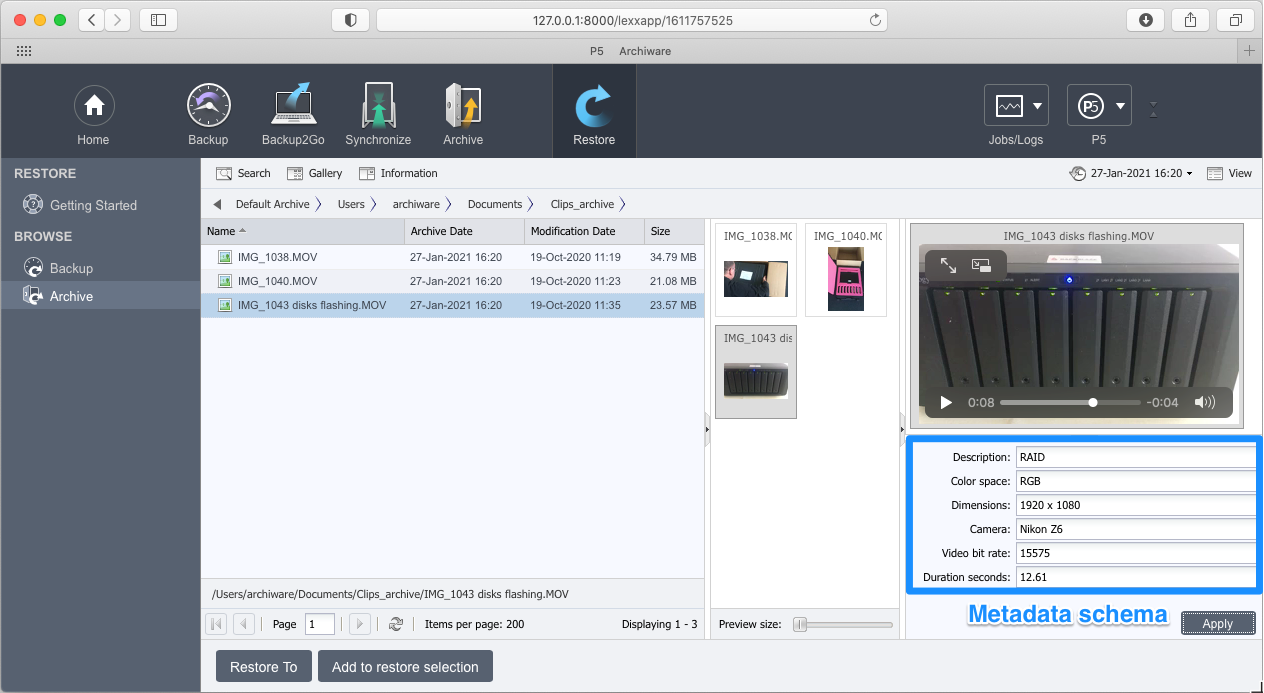 Example of an individual metadata scheme in Archiware´s P5 Archive.

When filling metadata fields, consistency is crucial. Actually all files should use all metadata fields. This is the only way to find 100% of the relevant files in a later search.

You can call this approach “modest metadata”. Foresight and sense of proportion are important.

A checklist can help building a cohesive archive.