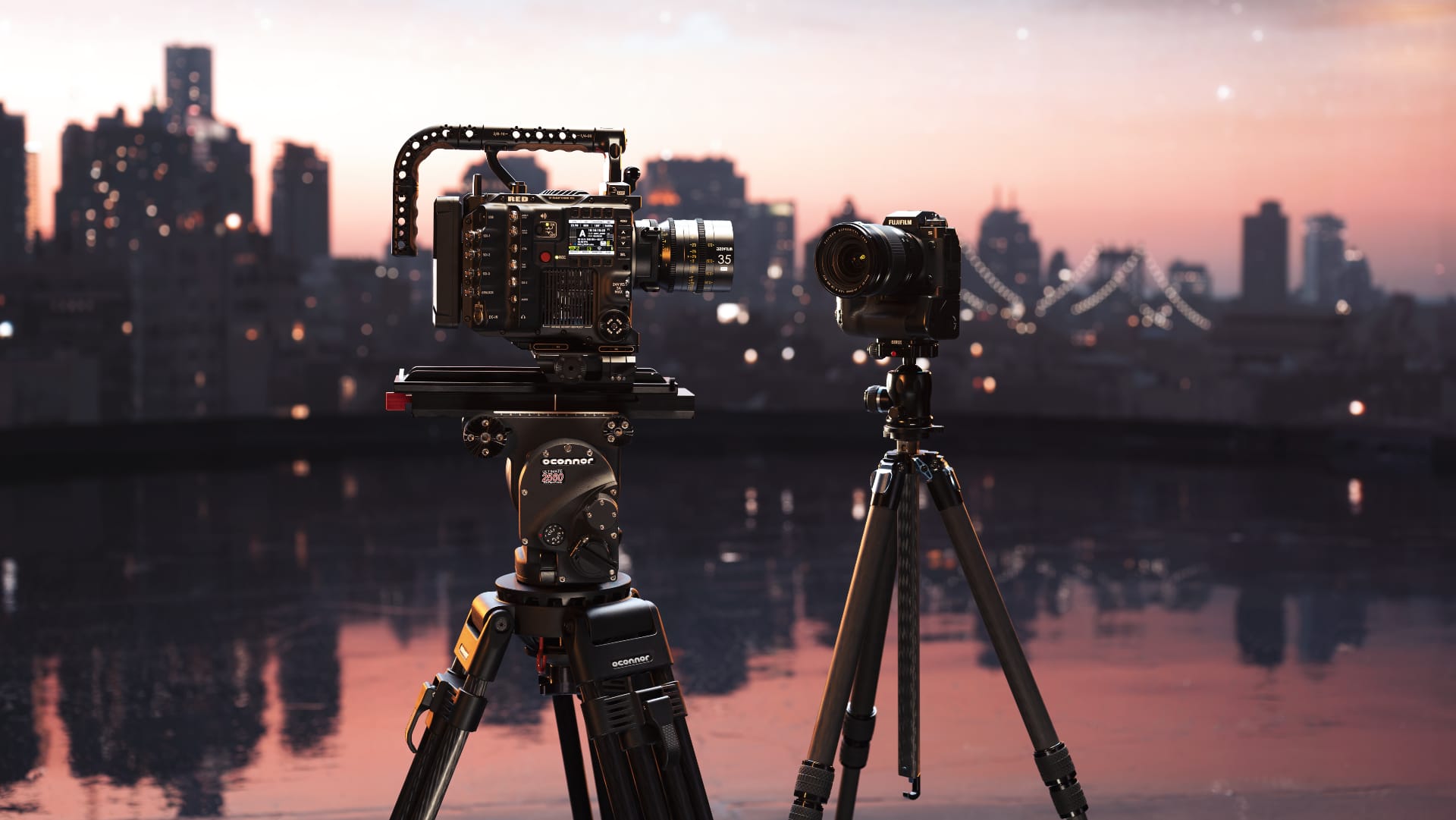 8K workflow collaboration with Frame.io is just one highlight of a busy Adobe MAX event which also includes updates for Premiere Pro and After Effects.

Adobe kicks off its annual MAX event today, this year both in person as well as virtual.

And accompanying the opening of MAX, new features and software updates across the entire Creative Cloud suite are being released.

Adobe’s acquisition of Frame.io has proven to be a tremendous boon for cloud workflows, particularly in the last 18 months since Frame.io Camera to Cloud (C2C) was launched initially with Teradek and Sound Devices as initial partners. Hardware integrations with additional partners Atomos and FiLMiC Pro combine with software integrations in the Adobe suite as well as other applications expand acquisition, editing and delivery possibilities.

At Adobe MAX this year, C2C integrations with Red and Fujifilm are able to upload to the cloud directly from the camera without any additional hardware additions.

While C2C workflows always were available to Red users via a Teradek Cube 655, Red V-Raptor and V-Raptor XL users will be able to upload 8K Redcode RAW files directly through the camera. While of course this is dependent upon a high-bandwidth network, this represents the first time that original camera files at full resolution rather than proxies can be uploaded to cloud. This opens possibilities such as delivering camera originals to a post house after each take or sending these OCF straight to a VFX facility to begin work.

Beyond the OCF breakthrough, the workflow also enables a ProRes proxy workflow in which every bit of metadata from the camera is included in the proxies. The example that Adobe uses is one of shooting 8K RAW with a simultaneous ProRes proxy which includes all metadata for easy working with the proxies and reconform to originals. And it even accurately uploads off-speed footage. Adobe estimates the Red C2C integration to be available in late 2022.

On the still side of things, Fujifulm’s X-H2S mirrorless camera will see native Frame.io C2C integration in Spring 2023. This begins what undoubtedly will be a trend to cloud workflows for still photography in which Camera RAW stills can be uploaded immediately to the cloud. We can no doubt expect other manufacturers to jump onto this bandwagon in the future.

Premiere Pro 23 sees changes and improvements to titling capabilities. Legacy Titler will no longer be included with refinements coming to titling features. There will be more flexible text alignment controls borrowing from Illustrator and Photoshop features. And a long requested feature—bulk edits on the timeline. It is now possible to select multiple title clips and apply such changes as font, size, backgrounds, etc simultaneously. 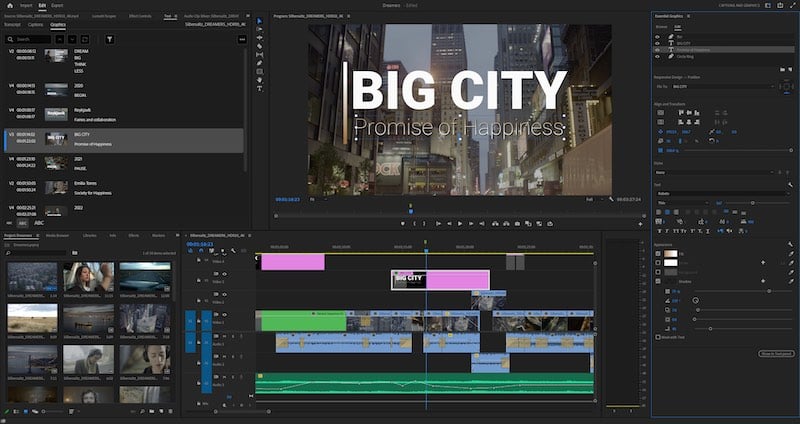 Performance improvements are 2x faster Motion Graphics template rendering and leveraging the processing speed of Apple silicon to render 10-bit AVC Intra clips twice as fast. Lumetri scopes will finally be GPU accelerated and now ProRes 422LT will be the default sequence rendering codec. Finally, AAF will be supported natively on Apple silicon and ProRes and RAW files from the Alexa 35 will be supported. Premiere Pro 23 is available immediately. 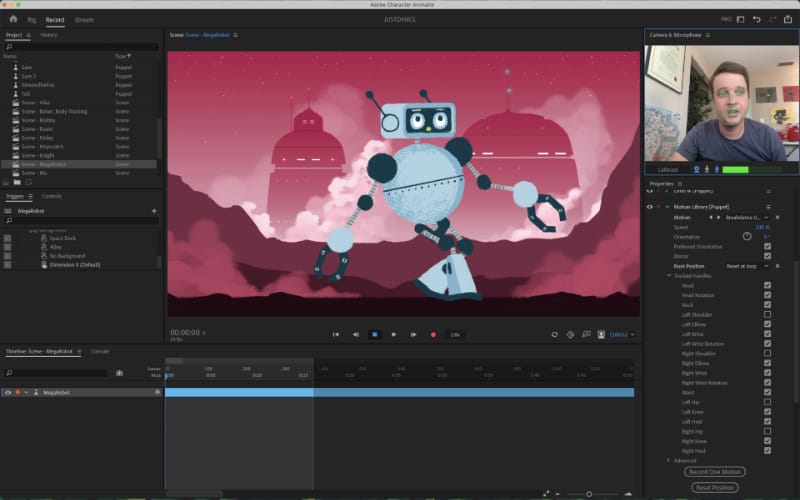 A public beta of Motion Library can be tested by working with the beta version of Character Animator. There are at the moment some 350 premade animated motions that can be added to your puppets which will be free to download and use with no credit attribution necessary. In recent years, Adobe has made future enhancements available in the late beta stages for user feedback and refinement, and Character Animator artists will definitely welcome the time and work saving features in Motion Library.

Additions here are both in the latest release version as well as certain features released in the latest public beta in order to obtain more user feedback. Adobe also notes that both the release and public beta features are based upon feedback requests from users.

The first of these is Selectable Track Mattes. Rather than needing to create an individual matte per each layer which user wanted to mask, now the artist is free to choose which track or tracks will have mattes applied, and this is irrespective of the track’s position in the stack. The first obvious enhancement here is the ability to make global changes and then ultimately to reduce the number of layers in a composition.

There are now 50 new animation presets as well as new composition presets which can be invoked immediately upon starting a new project. These include such presets as frame rate and size as well as presets for various social media platforms.

H.264 can now be exported directly from AE with no need to process through Adobe Media Encoder.

For the past several years, Adobe has been concentrating on AE speed and in this release, it will share faster template performance with PremierePro.

Three features will appear on in the public Beta version at this time. It will be possible to import 3D models directly into projects without any third-party plug ins. The Properties Panel will be context sensitive, showing only controls needed to edit the specific item. And OpenColorIO as well as ACES color management will be supported.

MAX will see new features in Adobe Fresco, additional 3D capabilities with the Substance 3D Collection, a major update to Photoshop, migration of many Photoshop capabilities to Adobe Lightroom and cloud collaboration in Adobe Acrobat.

Check out max.adobe.com for details of all of these updates as well as for all of the creative and educational sessions that are an annual part of Adobe MAX.