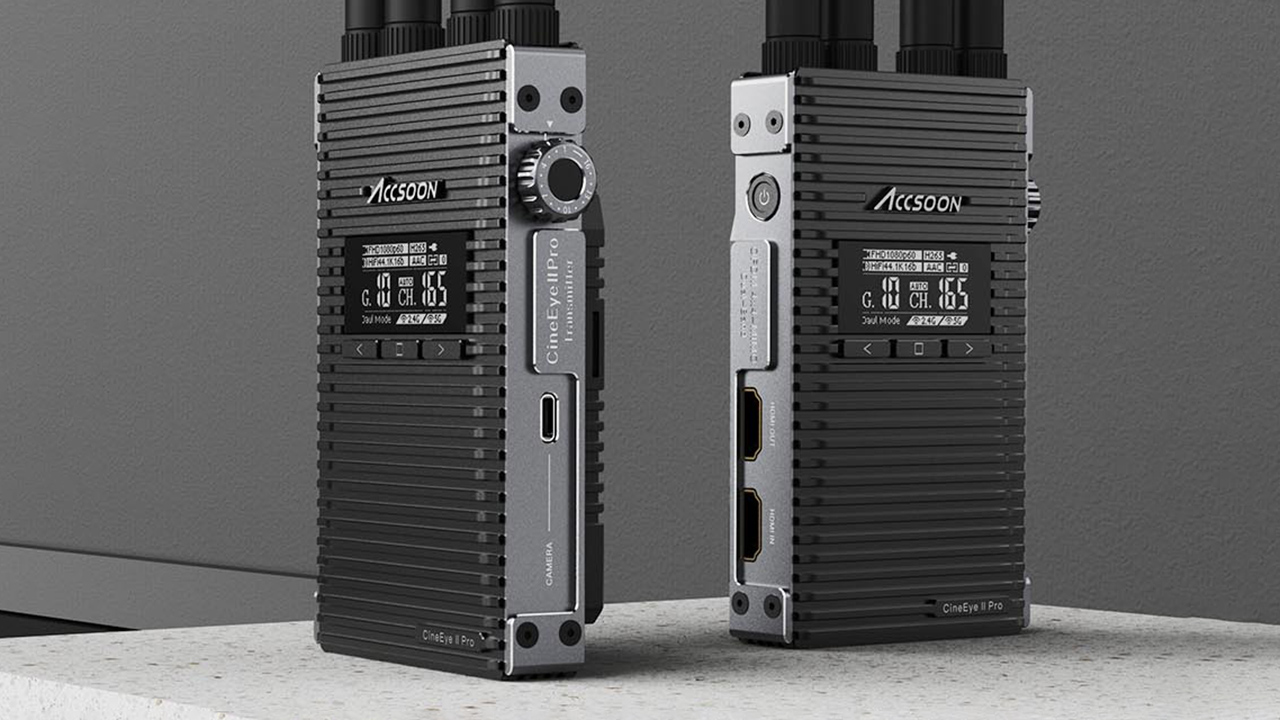 The attractively priced Accsoon CineEye II Pro looks a great deal, but does it have the chops to work well in a production environment? Phil Rhodes takes a detailed look in his review.

In an ideal world, a video transmitter should be exactly as simple as the cable it replaces. Some designs get amazingly close to that, but Accsoon’s CineEye II Pro is very keenly priced, and that inevitably provokes questions about what, if anything, it gives away to achieve that.

As with the company’s WiFi-based CineEye 2S, the physical build is rock solid, a machined metal case held together with screws. The SDI and HDMI versions are similar beyond the necessary differences in connectors, and both the transmitter and receiver (which are also near-identical) have Accsoon’s super-sturdy NP-F battery mount with the coaxial DC jack on the side. They tolerate 7.4 to 16.8 volts and thus either small camcorder or large broadcast batteries. Overall the device is roughly five by three inches by about an inch and a half thick. 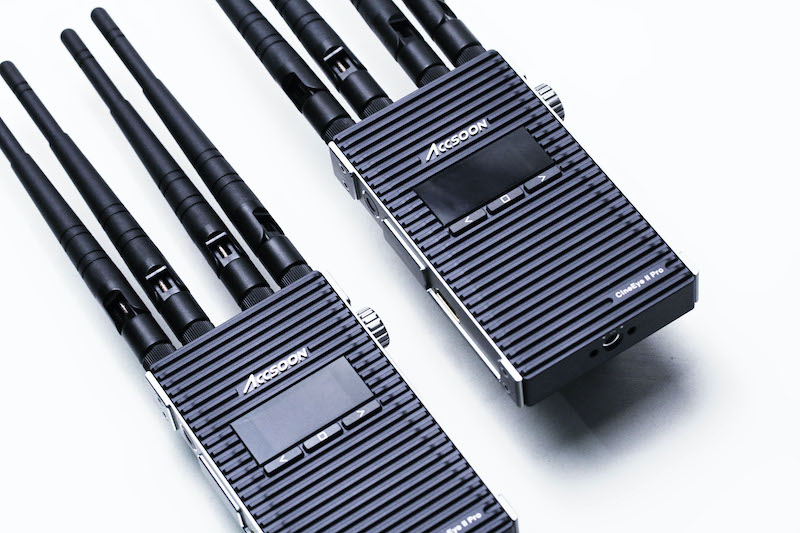 Unlike the CineEye 2S, the antennae are a conventional WiFi type, mounting on threaded connectors. This is necessary given the four-antenna setup; it isn’t clear what level of diversity is on offer without some low-level details of the receiver architecture, but more listening potential is never a bad idea regardless. The device operates in both the 2.4 and 5GHz bands where signals reflect readily from everyday objects, potentially creating a complex web of active and dead signal areas that more antennae really help get around.

Clearly the intention is to mount the device from the quarter-inch thread on the bottom, and included provisions mean it’ll be sticking straight up from a cold shoe. Many people will want at least a right-angle bracket to lay it down flat; the antennae are articulated to facilitate doing that. With the battery mount on one of the large faces and the display and controls opposite, the connectors on the left and more control on the right, there’s no obvious way to mount the transmitter on the back of a camera other than by the battery mount. That’s possible, though not something many people will be able to do without looking out the appropriate accessories. Perhaps it wouldn’t hurt to have a few more screw holes, and they don’t need to be large quarter-inch ones.

CineEye II Pro rides on the JVC GY-LS300. It's not a huge camera, so this does rather emphasise the top-heavy mounting arrangements.  A right angle bracket to lie it flat would help, but it's very context specific.

Electronically, and with that simplicity ideal in mind, there’s pleasingly little to report. The automatic configuration works nicely. The only necessary adjustment is the knob on the right-hand side which selects a channel. Set transmitter and receiver identically and it works. Cold starts are in the twenty-five-ish second range with no paired receiver operating, which is noticeable but not unreasonable. Changing parameters such as the group ID requires a restart, but it’s not something most people would be doing every five minutes. Each transmitter can service up to four receivers with video up to 1080p60 and consumes (for the HDMI edition) about four watts of power, meaning a large NP-F970 battery will likely run it all day.

So, radio performance. It’s not an easy thing to review because reliability of the link is hugely dependent on the radio environment and the exact nature of the objects in the way, but even in a fairly built-up area the signal made it through several sturdy walls and a car before becoming intermittent. Dropped signals are reestablished quickly and without fuss. Let’s just say it’s hard to fault, and certainly longer-ranged and more robust that jury-rigged solutions based on domestic video senders.

Channel selection is made automatically, selecting the least congested spectrum, unless there's a need to do so manually.

The last place it can fail, then, would be delay. Accsoon seems to be very aware that this aspect of the device will be scrutinised. The most famous devices in this field use variations on a very low-latency technology that’s made and owned by one company, and that company charges a premium for the technology. Accsoon achieves its price point, in part, by eschewing that, so it is clearly not going to achieve quite the same near-zero delay.

It’s certainly fast enough that laggy camera outputs and laggy monitors, which are both distressingly common, can contribute significantly to the overall delay. To indulge in a brief digression, the issue of lag in cameras and monitors is something that deserves more attention than it gets. It’s to Blackmagic’s credit that firmware updates improved the viewfinding on the Ursa Mini, for instance, although that’s unfortunately a rare story. It’s sometimes convenient, if you’re a firmware engineer, to buffer up a whole frame here and there and – hey – it’s only a frame, right? But if everyone else makes that assumption, it’s possible to end up with a system that makes operating more difficult than it should be, especially if we also include things like a LUT box, format converter or transmitter. 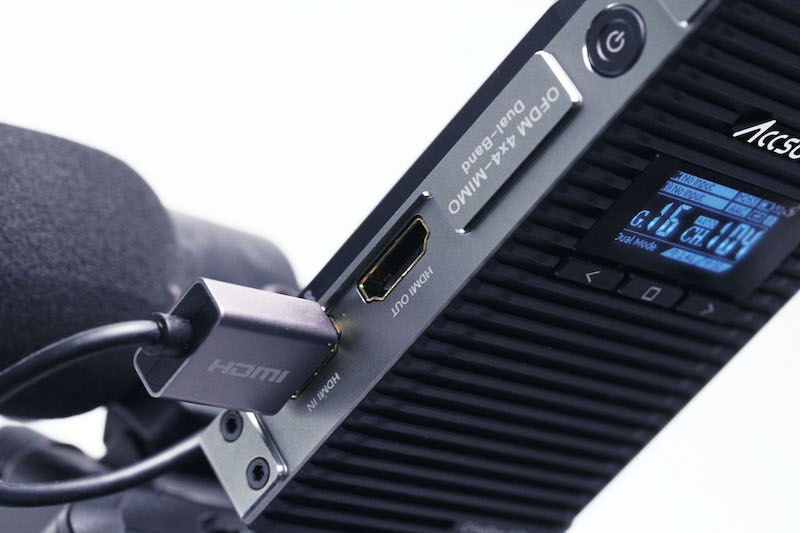 There are SDI or HDMI-capable versions.

As such, tests need to to compare the transmitter-receiver pair to a cable, not assume that entire lens-to-LCD delay is down to the transmitter. The specifications state that delay may be under 60 milliseconds in ideal circumstances. Given that one 24p frame is nearly 42 milliseconds, that’s ambitious, given that the system uses H.265 and it’s at least possible it’s using inter-frame compression, which intrinsically requires more than one frame’s worth of delay. Probably that 60ms figure is based on the assumption of 60fps video, implying that the real-world absolute delay time is related to a number of frames rather than a number of milliseconds. 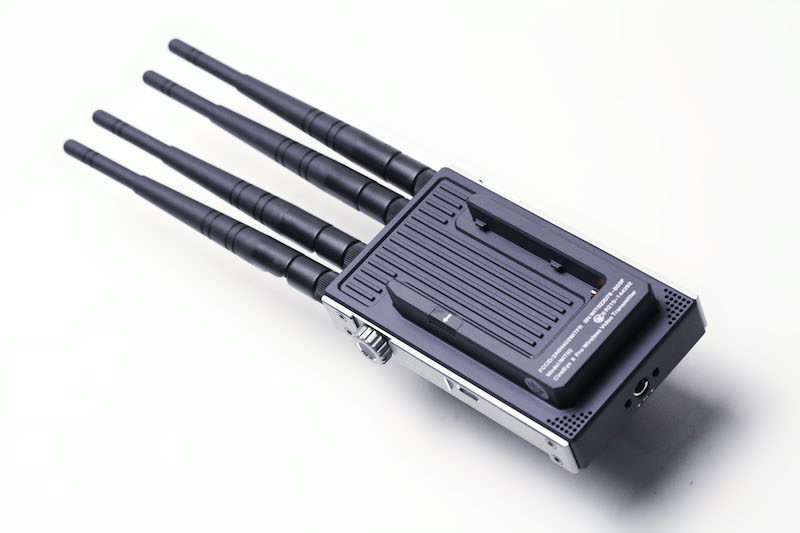 Delay through the company’s hardware, in high-speed mode, appears to be perhaps two or three 24p frames, or about twice the quoted 60ms – but that works out if the 60ms figure assumes 60p video. That’s very respectable under the circumstances, and it means that yes, for the most part, you can use it in exactly the same way you’d use any video transmitter, perhaps unless the shot involved following a leaping grasshopper.

The Accsoon CineEye 2 Pro is priced at £550 including tax, a serious saving over competing options. Given the sturdy build, straightforward operation and solid pictures, even in “speed” mode, it’s the sort of thing that can be added to a package as a quality-of-life upgrade without it having to be this year’s major gear investment.