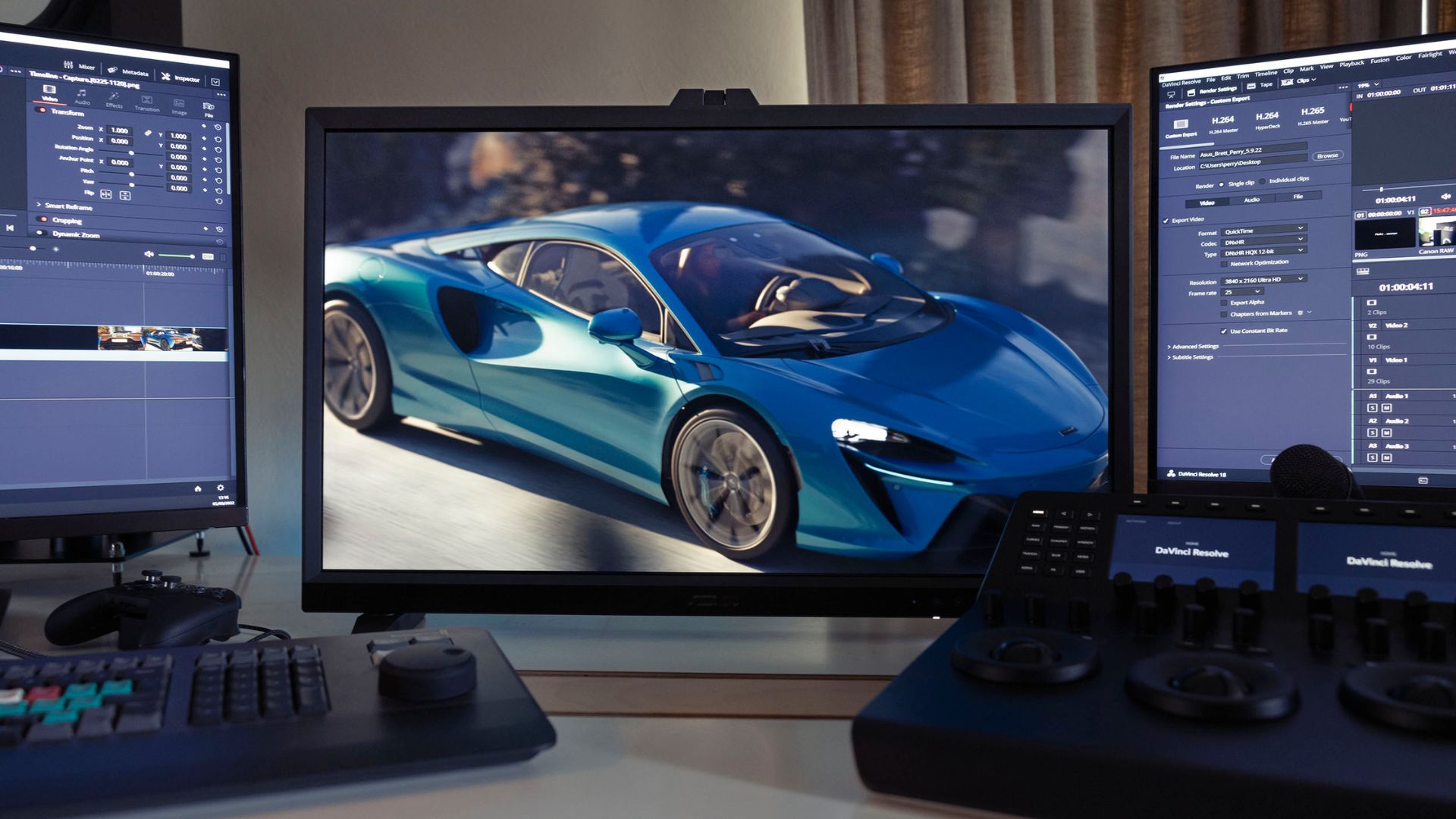 Brett Danton is a Director of Photography who works mostly in commercials and has been looking for a monitor that can display 4K HDR work across all his deliverables. Here is what he thinks of the ASUS ProArt PA32DC.

I have been using ASUS monitors for the last three years having spent a long time searching for a 4K HDR monitor that would work across both motion and digital software-created imagery with my projects requiring a consistent colour pipeline. I am often shooting motion in RAW to be used as stand-alone footage, or inside of (and to work) with Omniverse or Unreal Engine assets, or assets used in motion footage.

At the moment I have two ASUS ProArt PA32UCG displays side by side running from a Renderbox that has 8x A6000 graphic cards in it; on one I have Resolve open, the other Omniverse, and the assets all have to work together.

I was very keen to try the new $3500 ProArt PA32DC OLED display to see how it would fit into my workflow, I have seen quite a few technical reviews on it but I wanted to see what it was like in the real world. 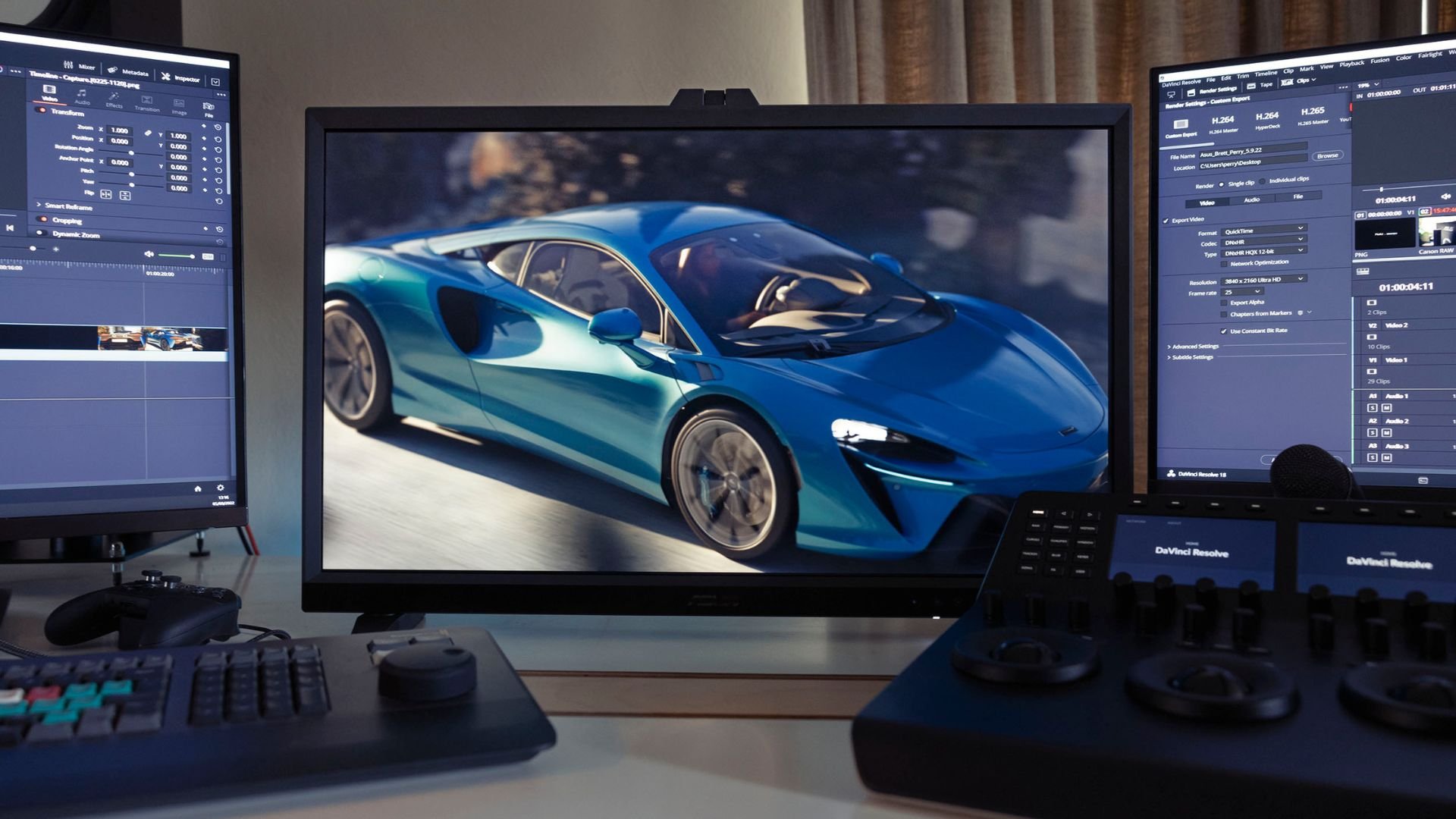 The first thing you will notice is how light and small form factored this is compared to the PA32UCG. Being OLED the main screen is thin like the latest generation of home TVs, easy to handle with a built-in carry handle, and much lighter in weight, which makes it so much better for location work and transportation (I have taken the PA32UCG on location but it's more of a studio desktop monitor in my opinion). The PA32DC comes with retractable feet or stand and has a VESA mount option, again very versatile for moving around between set-ups and locations with quick changeover options.

The control buttons have been moved to the front - which is a massive improvement -  and it has a small bezel edge. I prefer this to flush as they tend to get finger marks when you adjust them. 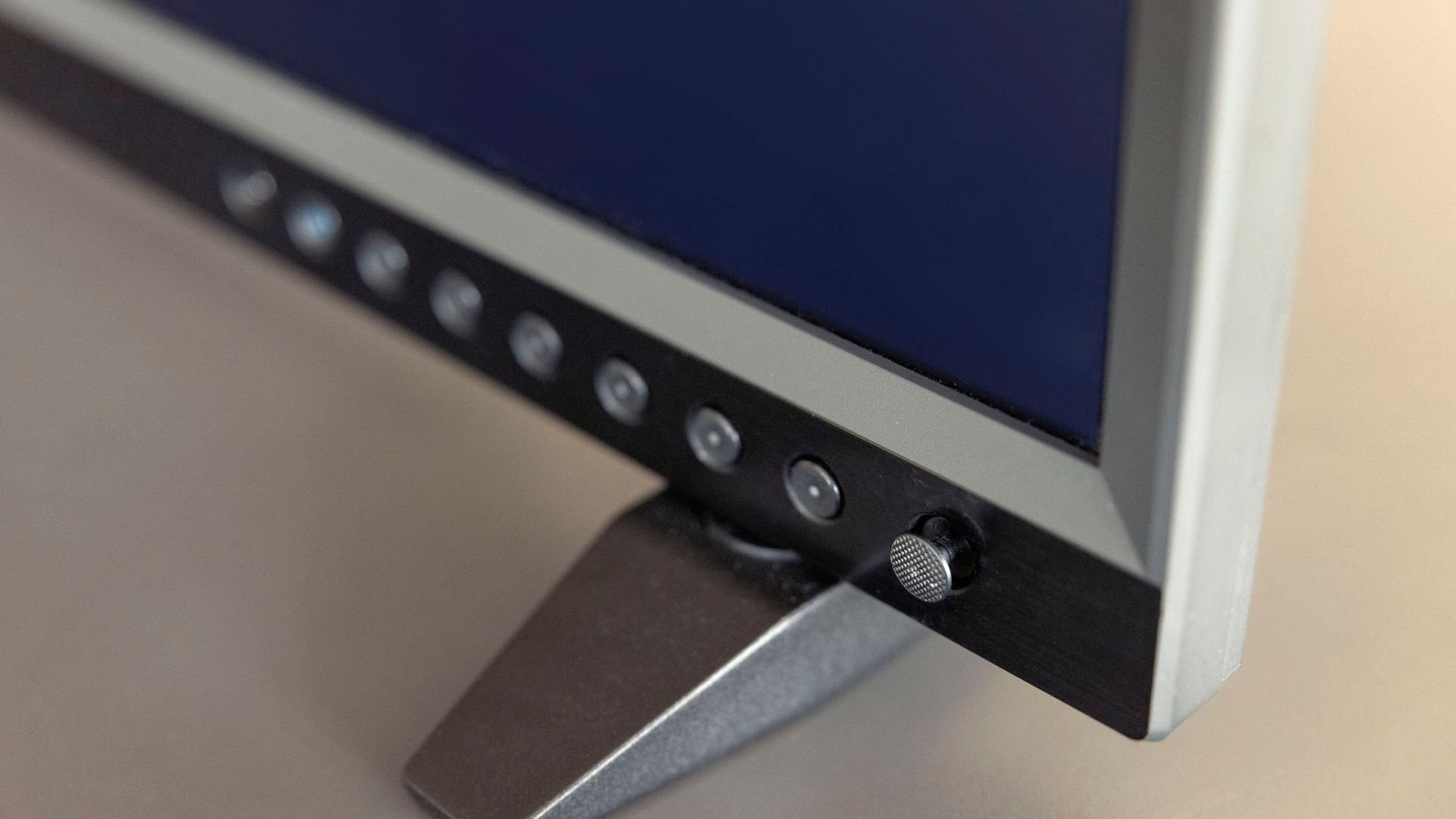 The other design feature I really like is that the input ports are now on the side raised back section and they are easy to access with one display port and 3 HDMI inputs; no fighting to get cables in.

The built-in calibrator is on the top of the screen and has an arm that rotates forward when used, which makes calibration much easier than messing around with a separate unit. I used to try and calibrate my other monitors every week, but with a separate calibrator I got lazy with all the plugging and unplugging of cables and left it for weeks. With the built-in calibration tool, I can easily make sure the calibration covers every colour gamut you can think of and is a very easy process with the ASUS custom software. 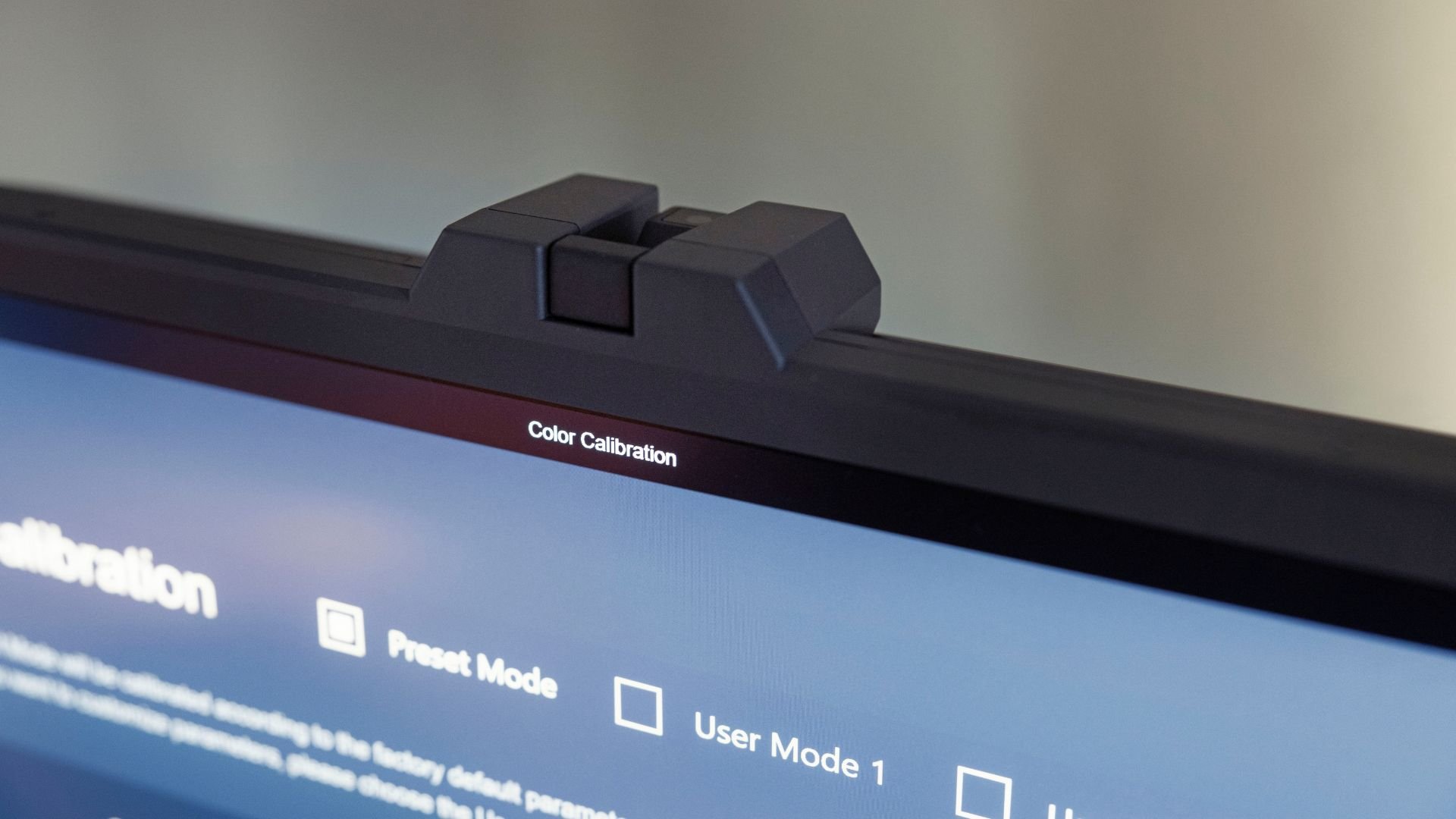 The other thing you notice is just how black the screen is when it is off. It's jet black with
minimal reflection and this stays the same when you turn it on. This is the first full
black on a monitor I have seen. I used it across Resolve and Omniverse and found the
colours rich without oversaturation and detail across all the range with a great white roll off, some OLEDs seem to clip the white roll off. I used it for grading and the image is stunning.

Sitting in front of a monitor for an entire day that then rolls into weeks, you really get a feel for it. The PA32DC is soft on the eyes. Often other monitors I can only look at for 30 minutes and have to take a break, this I was fine with all day. It also has a very good viewing angle. There is no need to crank your head around to see the image clearly if you are off-centred or have a client sitting next to you.

It’s a monitor that I would take on location or use in the office: easy to transport, has amazing colour reproduction and a proper black. It will work right across all the applications I have to work in, or as a clean feed video out grading monitor, it fits my requirements for a monitor that can work in motion and computer world as I call it.

The build quality seems to have moved up a gear and I would have no hesitation in shipping it in a road case or even a soft bag in the back of the car. 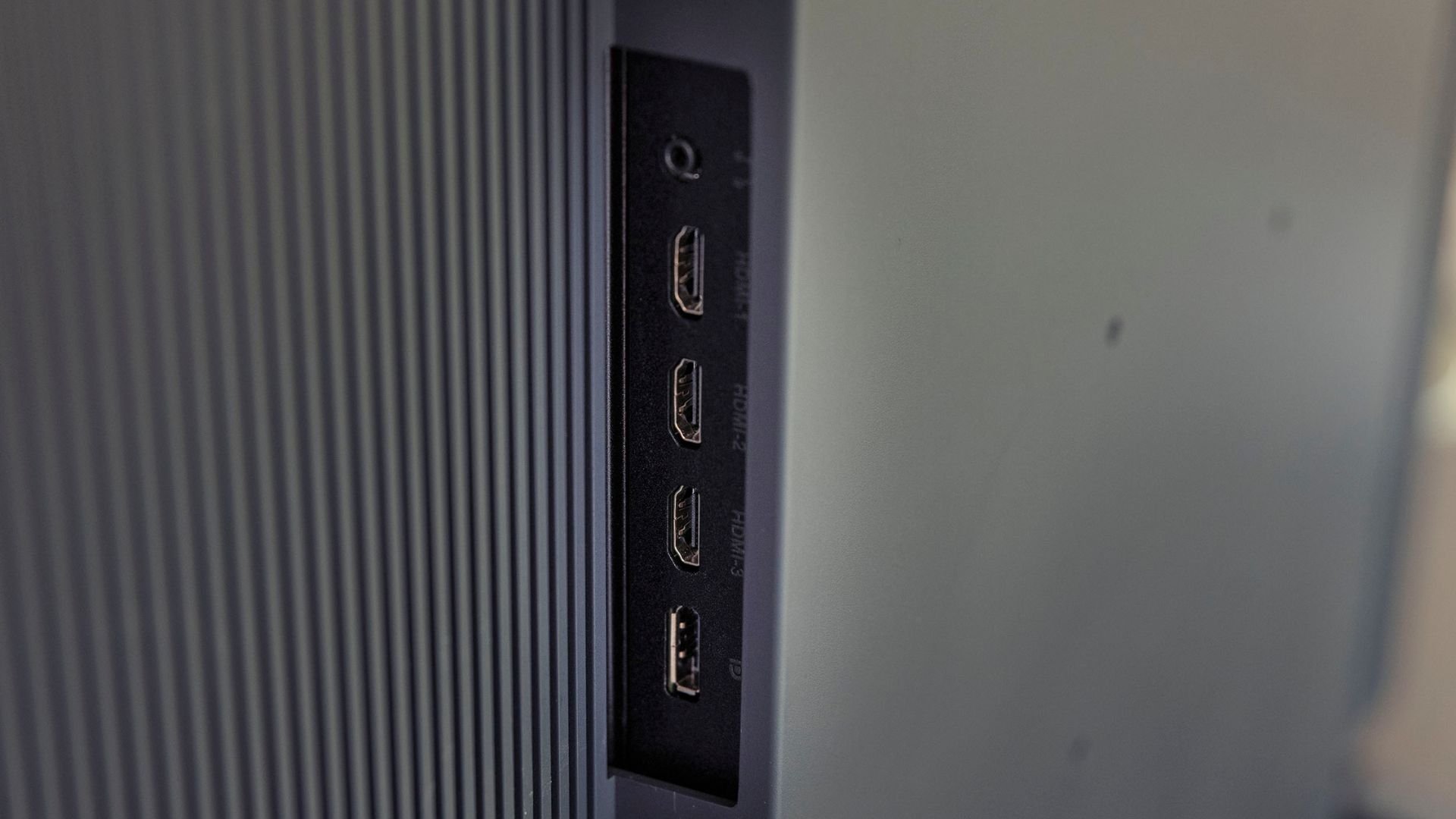 It does have less nit brashness in HDR than its LED counterparts but that’s why I think it’s much nicer on the eyes. It’s also not a gaming monitor with a lower refresh rate, it is a fully professional multi-application grading and computer monitor for office and location use, that covers every SDR and HDR colour space all the way to Dolby Vision with a proper black that no LED monitor could ever achieve.

I have not seen another monitor at this $3500 price point with an image that even comes close.