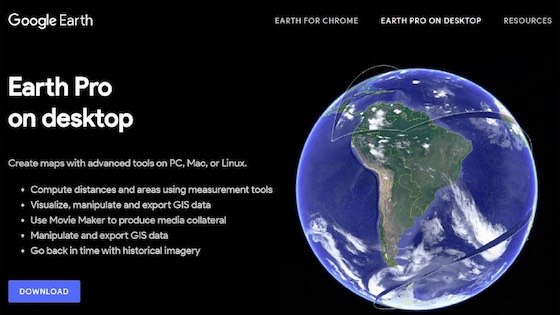 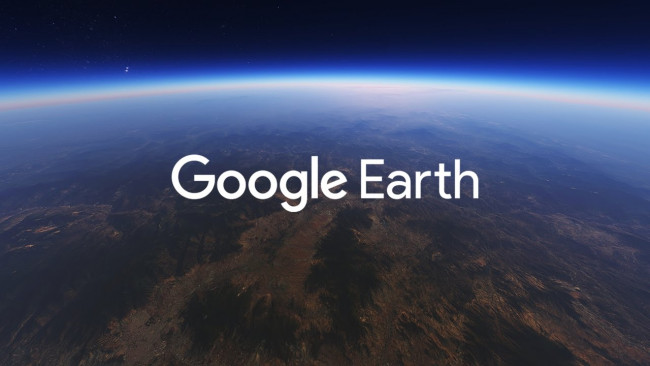 Answer? Google Earth Pro. Until January 2015, this high resolution, professional version of the popular mapping software Google Earth, cost broadcasters and institutional users an annual subscription of $399/year. Now it’s free for everybody to download to their PC or Mac Desktop, but with the recent introduction of 4K output resolution, GE Pro could become your new best friend!

Well, as the HD resolution screen grab above shows, GE Pro’s output frames contain Logos and other copyright data and you can pay to have that removed if you want, but if you’re happy to use Google’s powerful 3D data set with some corporate sponsorship, anything you publish or create with GE Pro to popular social media targets such as Facebook, Instagram or YouTube, will cost you nothing. Even though GE Pro harnesses the power of your GPU, I run it very successfully on a diminutive 10in HP Stream notebook PC with only 2 GB of system RAM yet, it has the ability now to produce extremely pleasing high-resolution still frames or videos in a multitude of output formats and frame rates.

Where do I get Google Earth Pro? 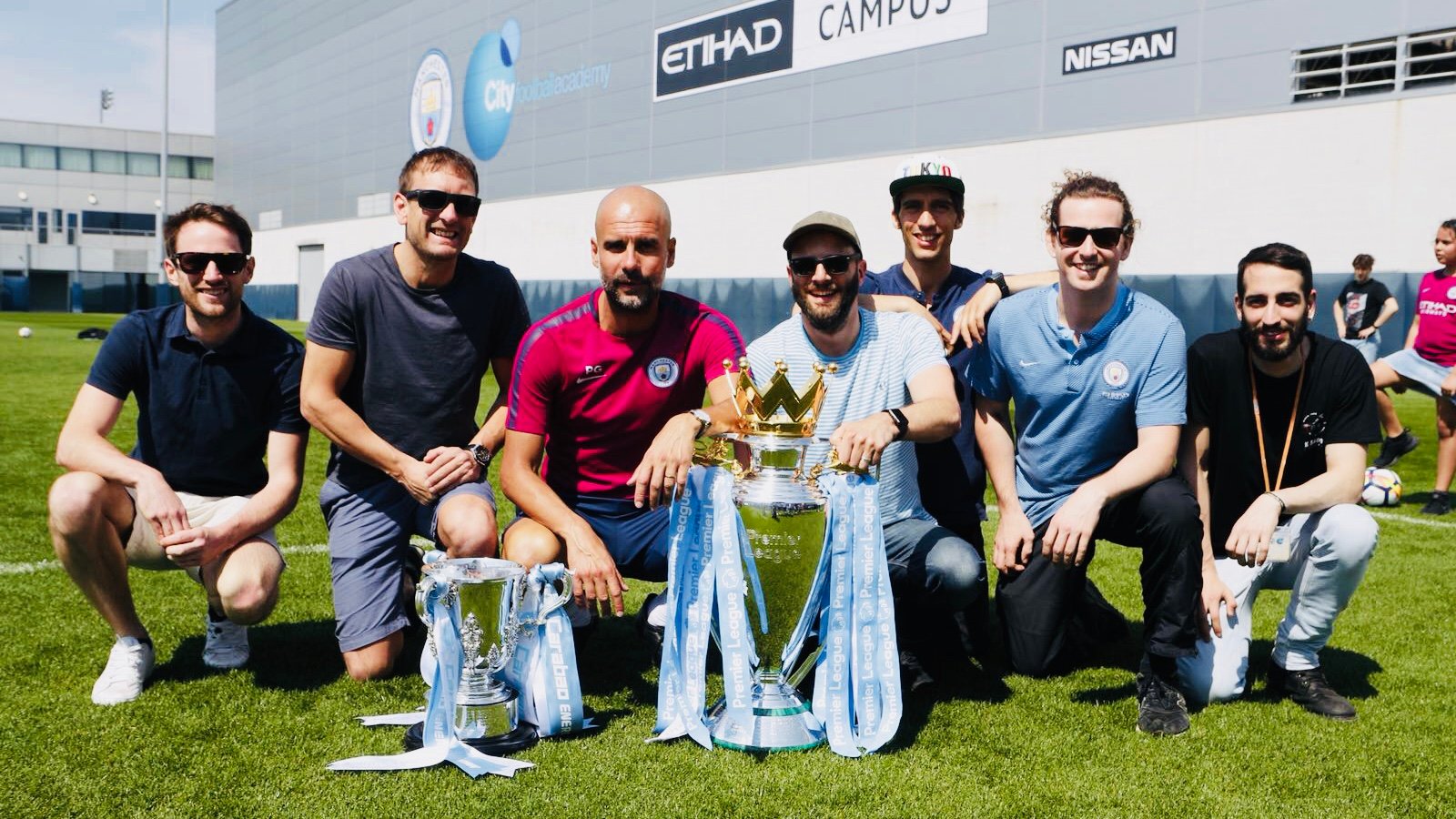 What can I do with Google Earth Pro?

GE Pro is first and foremost a 3D version of Google Earth and renders a user-adjustable 3D representation of Earth based on high-resolution satellite imagery. You can operate it with a simple mouse and keyboard but like most real-time 3D software, it really shines when using a USB Joystick, especially as GE Pro also includes a bonus and very realistic Flight Simulator.

Apart from zooming into virtually any part of the Globe at treetop level using the Search Bar or by entering GPS coordinates, you can upload your own geo-tagged photos to have them viewed by anybody, anywhere in the world, with an internet connection. However, since the recent dissolution of the popular Panoramio software in late 2016, you now need to become an official Google Guide and upload your photos to Google Maps where they may or may not eventually find their way onto the Earth Pro 3D Globe. 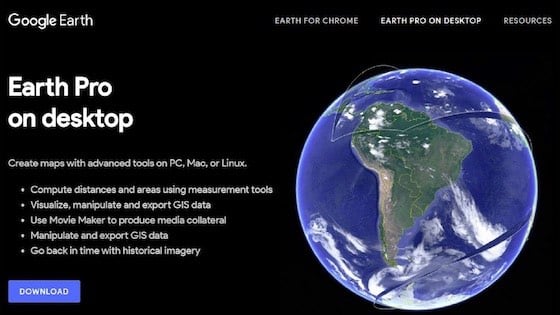 But for video makers, the real power of GE Pro is the ability to record a real-time flight over a specific part of the globe, then render it out at very high resolution. For example, the maximum resolution of still images captured from the Desktop display is now 4800 x 3008 pixels with pre-sets for common HD and UHD resolutions. GE Pro’s included Movie Maker toolset now allows video renders to be output at low-resolution 720P MP4s but for professional or broadcast use, UHD image sequences can be rendered at frame rates of up to 30fps with five user-adjustable picture quality settings.

As an example, here is a simple GE Pro Tour I conducted over the island of Taiwan last year. I set my elevation or altitude to about 10 miles above sea level (16km) and flew in a straight line down the island at a speed calculated to approximate that of a passing satellite. Once the Tour was saved, I set it to render out to an HD image sequence which I later transcoded to 8bit H.264 for upload to Youtube.

The following Youtube video example is a very truncated version of a much longer and smoother 3D animation which shows the steep and winding path of Taiwan’s century-old Alishan Forest Railway as it climbs from sea level to nearly 2,500m in just 75 kilometres. I ran the rendered Image Sequence at double speed in the final Edit to fit it to the short music track before adding the supers in Post. Before rendering out my Tour to an HD JPG Sequence, I pre-set tagged Waypoints or Pins at various altitudes and compass positions first, then ‘flew’ from Waypoint to Waypoint to record the Tour in real-time.

This took a bit of practice using only keyboard shortcuts but once I was happy with the timing, the final render looked exceptionally high quality. That was before I subjected it to a silly 2x overspeed to suit the short music clip.

By using the Zoom Bar or your Mouse Wheel and by clicking on the 3D Compass Ball in the screen’s top RH corner, it’s possible to roll the normal 2D view from straight above like it displays on Google Maps to a very convincing low angle 3D perspective. Now the fun starts! On the PC, holding Shift/Alt simultaneously, then pressing any one of the four Arrow keys allows you to circle a mountain peak for example, in real-time slow-motion. Your Tour speed is variable, so any movement you record and save as a Tour can be rendered out later in whatever resolution and format that suits your particular project.

After bringing the Image Sequence rendered out of Google Earth Pro directly into DaVinci Resolve, I was surprised to see how accurate the render displayed on a Rec.709 calibrated monitor. According to the Resolve Scopes, very little, if any, correction needs to be applied in Post. Maybe just a tiny bit of sharpening and/or Contrast adjustment. Consequently, a relatively quick render to say, H.264 at 30fps should look very good on Youtube without any post production correction applied at all.

Another unique feature of Earth Pro is the ability to adjust the ratio of height vs surface area using the Elevation Exaggeration in the Options available under the Tools Tab. For example, Taiwan is subject to some of the world’s most extreme erosion and seismic uplift. Just one of the many rivers draining the interior on the Island’s East Coast often dumps more sediment into the ocean annually than the combined river system of Continental USA. As several mountains rise to nearly 4000 just a short distance from the coast, this can be described either as a 1:1 factual representation such as this frame grab: 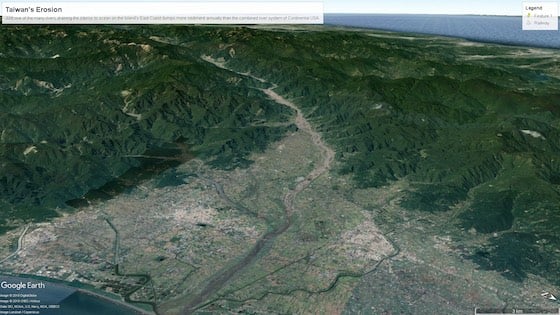 Or alternatively, the exact same aspect can be represented with a distorted vertical perspective as depicted in the following frame grab: 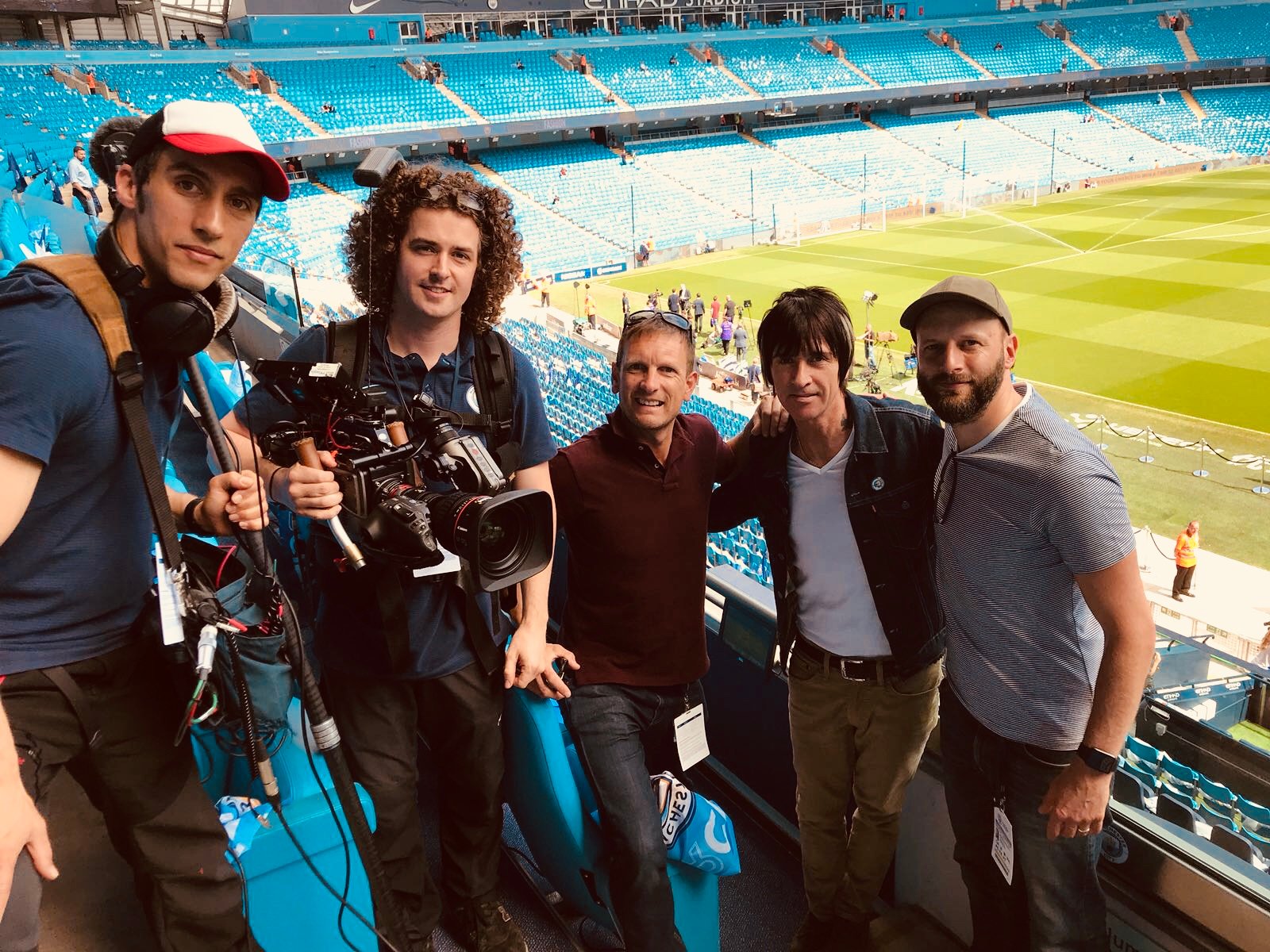 Finally, for video producers who need to add photo-realistic animated 2D or 3D maps to their work, Google Earth Pro is an extremely powerful asset to have in your toolbox. Like DaVinci Resolve, we now have access to some of the world’s most powerful software for just Peanuts but it’s always an advantage to have a powerful GPU installed in your Computer as well as a reasonably fast internet connection when recording your 3D Tours.