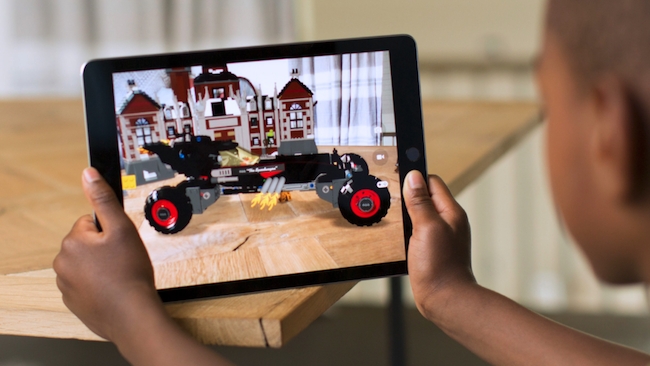 Apple's ARKit already has a rather large installed user base of devices...

After Apple announced a developer’s kit for Augmented Reality at WWDC 17, is the inflection point for AR/VR now within sight? Or is mass market AR and VR beyond even Cupertino's famous reality distortion field?

This time last year the world and his dog were catching Pokemon. And two months later they were not. Just as quickly as it surfaced, the game faded away, but if nothing else Pokemon Go did introduce mobile AR to the mainstream and demonstrated that there is indeed an appetite for overlaying digital creatures on reality. If more proof were needed, the masks and effects overlays of Snapchat continue their bizarre popularity.

Requiring less need for us to rewire our neural networks and less need for bespoke hardware, AR is thought more likely to catch the public’s imagination than VR – initially at least.

Now that Apple has joined the bandwagon the potential for AR to go viral has dramatically risen.

Apple itself boasts that it’s got “the largest AR platform in the world,” and that may well be true – it has about 700 million iPhones alone in user’s hands.

In a blog post, Epic Games CEO Tim Sweeney breathlessly declared, “Where there are a couple million VR enthusiasts today, and early AR hardware from other companies has reached several thousand developers, Apple is bringing this high-powered technology to hundreds of millions of consumers right now... I believe this is truly the start of the mainstream VR and AR revolution.”

Need we add that the AR and VR demos that Apple showed at its launch were based on support from Epic Games’ Unreal Engine 4.

Apple rivals include Facebook, Google and Microsoft. Microsoft's Hololens headset adds digital graphics to a user's real-world surroundings. Facebook sees AR as a potentially huge new communications platform and launched its Camera Effects platform for AR developers in February. Google has been experimenting in AR with products like Google Glass and its Tango platform for smartphones, which uses depth sensing to map environments.

Apple’s developer’s kit called ARKit for iOS enables what Apple refers to as world tracking, which works through a technique called ‘visual-inertial odometry’. Using the iPhone or iPad’s camera and motion sensors, ARKit finds points in the environment, then tracks them as you move the phone. It doesn’t create a 3D model of a space, but it can ‘pin’ objects to one point, realistically changing the scale and perspective. It can also find flat surfaces, which is great for putting digital props on a floor or table.

The Cupertino-based six billion dollar computing giant will battle for a market that could hit over a billion users and $60 billion revenue globally by 2021 according to Digi-Capital.

The analyst states that mobile AR could become the dominant AR/VR market for the foreseeable future, as it solves the five major consumer challenges for AR.

Apple may be late to the party but as Frank Gillett, a principal analyst at research firm Forrester pointed out to Time, it has at least one big advantage over its rivals.

"Because [AR] is really computationally intensive and deeply integrated, it's probably going to work best for companies that control the operating system as well," Gillett said.

Even normally sober analysts have gone overboard on AR’s potential. "Augmented reality is the next stage," Tuong Nguyen, a principal research analyst at Gartner told Time. "It's not going to replace what's around, [but] AR is the next user interface step.”

While it will take time to catch on, AR technology will improve such that we may hardly give it a second’s thought when digital information is displayed in realtime over our vision – by glasses, retina display, contact lens – or (if Charlie Brooker’s Black Mirror to the near future is to be believed) by brain implant.

High time then to examine the dark side of AR, which is what University of Southern California did last week. In a presentation at Augmented World Expo, USC’s Phil Lelyveld described how, with AR linked to AI and the internet of things, we are in the process of redefining reality itself.

“We are building experiences under the assumption that we are doing the right thing … or at least that the technology is morally neutral,” he said. “There is a lack of adequate security, an exponential increase of personal data gathered, and embedded bias and psychological manipulation in the AI that may go undetected for a long time.”

If that sounds like so much dystopian scaremongering then consider this observation from Sol Rogers, the boss of production company Rewind which is a Microsoft certified Hololens developer.

“Because the headset knows the geometry of objects in the room where you are - the sofa, the door – we can place 3D objects or characters into that world and write a narrative around it.”

This is dubbed mixed reality and according to Rogers who is playing with the stuff this fundamentally alters our perception.

“Where traditional broadcast drama and much of VR is about depicting a fictional world, mixed reality adds fiction to the world we are in. Since we are so used to building memories of the world with our eyes when you interact with a character sitting next on your sofa your brain tells you that character is there. You are creating memories in a totally new format.”