VR: a technology still on the verge at NAB 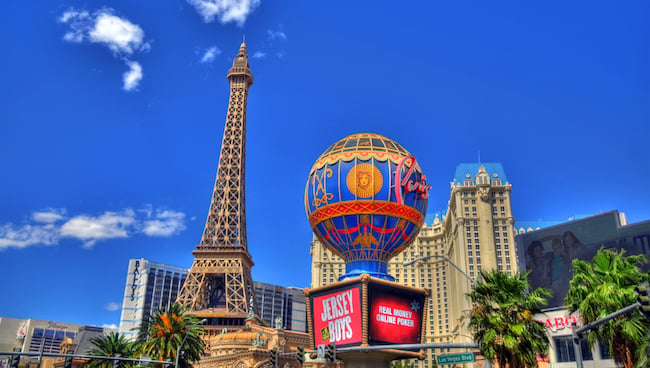 Las Vegas: A HDR skyline in all senses of the phrase

Notes from Vegas. Phil Rhodes gets the sense from NAB that VR hasn't moved forward from the ‘this is the next big thing’ stage to actually doing anything concrete about it. Surprisingly, there seems to be some uncertainty about HDR too.

The point at which it becomes clear that something is here to stay is often the moment when people stop claiming it is. Virtual reality, for instance, is still very much at the “it’s happening, honest” stage, even though it isn’t particularly clear that it is happening or that the people saying so are being honest, their eyes fixed on the rippling mirage of potential future profitability.

It would be nice to see the same happening for HDR, as its applications are a little more immediate and the technology rather nearer readiness for the bigtime, but there’s still a degree of uncertainty as regards the ease with which it can be distributed and the results people will enjoy in the home when it is.

Atomos’ new 19-inch HDR monitor-recorder is something we’ve already covered. The company’s existing HDR provision, in its seven-inch range, is a useful tool but it is not designed to be a high precision reference monitor in the way that might be expected of the new, larger display. We’ll eyeball it as soon as possible anklet you know what we think.

Lesspain Software’s Kyno media management application, which we discussed a while ago has enjoyed some significant upgrades in terms of its integration with Final Cut Pro, DNxHD presets (coming soon), and, crucially, it is soon to be available for Windows. The purpose of Kyno is, in some ways, to be a media asset management application which does not have the infrastructure requirements of most MAMs; instead, it works with files stored entirely conventionally, meaning that commodity storage can be used and all of the flexibility and performance of available storage remains available. Skirting around what we’re allowed to discuss, many exciting things are planned for the future of Kyno, and we’ll have a look at the Windows version as soon as a test example becomes available.

And finally, yes, there has been much talk of VR and AR. We’ll spare the blushes of the people who actually said this, but the discussion was almost exclusively in terms of revenue streams, subscribers, marketing and monetization, all of which are terms which have absolutely nothing to do with the sort of material that might actually be displayed on a VR headset.

There’s not nearly enough consideration of what this tech is going to be used for, on a very basic, where-do-I-put-the-camera sort of level. If this isn’t addressed fairly quickly then VR, at least as a way of delivering linear content such as drama or sports, is at extreme risk of going the way of stereo 3D. There was quite a noticeable tendency to claim that this was not going to happen, which sounds like protesting too much.

It’s entirely possible that the industry has already recognized the problem with linear content over VR. Computer games are an easy, almost friction-free way to use the headset technology. Most people, at least, seem happy that linear content for VR should be only very loosely related to conventional filmmaking, and that we are, at best, at the cusp of developing an almost entirely new artform. That realization is valuable. Now, we just have to actually, well, do that.