Some notable 360° video projects from the virtual front [sponsored] 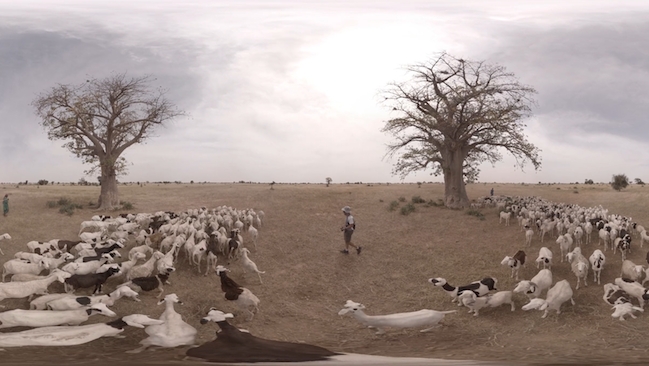 The finisher article will see the camera chap disappear entirely...

Imagineer’s Mocha VR is being used by an increasing number of production houses as 360/VR filmmaking is officially entering the mainstream, so the Imagineer team recently sat down with three early adopters to learn more about their experiences in 360° video production and post.

Representing NYC, LA, and London, G2 Immersive, Koncept VR, and Surround Vision all specialise in cinematic VR production and post finishing. In fact, each company was an active beta tester in the recently launched, Mocha VR, our 360 optimised planar tracking and effects tool.

Emmy-winning G2 Immersive Studios is a forward-thinking full-service production, post, and design studio that leapt into 360 video content three years ago. G2 creates 360 content for interactive virtual reality and augmented reality as well as scripted, news, reality, and live genres. Projects have included: The Dakota Access Pipeline | This Is All We Have, Stan Lee’s Comic Con | Nerds Like Us, and Cannabis Prop 64.

Recently, G2 used Mocha VR on two projects: the 360° short If Not Love by director Rose Troche, an official VR selection in 2017 Sundance Film Fest that takes you into the heart-wrenching world of a fictional mass shooting at a nightclub and asks what if things had turned out differently; and The Rook produced by VR studio Holor Media, which shows you what it’s like to be a rookie cop in Los Angeles.

“Mocha VR makes it easy to track and roto in equirectangular space,” says Erick Geisler, Founder and Creative Director. “We don’t have to convert to cubic mapping which saves time and preserves image quality.”

“There was one shot in If Not Love where an actor was moving around and it was difficult to get rid of the camera shadow,” states Geisler. “The camera was shadowing in a specific area that would have been extremely difficult for us to remove without Mocha VR.”

Koncept VR is the brainchild of the creative team behind Freedom360, the original 360 GoPro camera mount. The virtual reality agency has over five years of experience telling 360 stories in cinematic VR. Clients include CBS Interactive, Coca-Cola, The New York Times, Mashable, and more.

Mocha VR was used extensively on their journalistic project Defying the Beast for World Vision, a global humanitarian nonprofit for children in need. The project, which shot in Honduras, details the dangerous train-hopping freight train system that many Central Americans use to reach safer areas for better opportunities. The team faced many challenges shooting in uncontrolled environments where people would cross seams and get too close to the camera.

“We use Mocha VR on every project as we always have some moving shots or seam lines with action in between that need to be fixed,” comments Alex Chechelnitsky, Head of Production. “There is no better way to do it.” 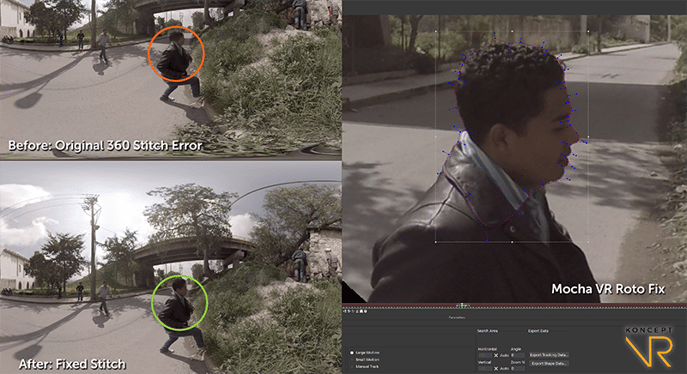 “Mocha VR’s planar tracking in combination with roto helped us fix the situations that were generally unfixable before with great ease. It helped us recover parts of the scenes that were damaged by the initial stitch,” adds Chechelnitsky. “We worked much faster and we were able to deliver a better-looking product to the client.”

Surround Vision’s award-winning 360 content creation company was founded by Richard Nockles, who introduced 360 production to broadcasters in the United Kingdom in 2010. It’s no wonder the VR team was the first to develop ‘director’s view,’ ‘picture in picture,’ and other major VR technologies that are now widely used. Surround’s cutting-edge innovations mixed with creative storytelling make it a go-to for popular brands, broadcasters, and ad agencies, including BBC, Tate Modern, Sky, Disney, RayBan, ITV, and the United Nations.

The distinguished team at Surround has years of experience shooting 360 and is well-versed in post-production. Surround Vision is now using the Mocha VR plug-in directly inside of Adobe Premiere Pro and After Effects. “Although we try to avoid situations that would require heavy removals with the kind of work we do, getting the shot is often more important than preparing for post-production,” says Patrick Dawid, VFX Artist. “Our main use of Mocha VR is extreme situations like that where any post work would otherwise be a nearly impossible task.”

Growing A World Wonder, a 3 minute VR film commissioned by UNCCD (United Nations Convention to Combat Desertification), was one such project. The short film takes viewers into The Great Green Wall project — an ambitious project to stop the Sahara desert from engulfing the Savannah plains by planting a wall of trees in Central Africa. In this 360 before/after example, we see that Surround Vision used Mocha VR’s object removal tools to remove the camera operator from the shot.

“We used Mocha VR for camera stabilisation that would otherwise not be 100% accurate and camera op removal that would be difficult to execute,” remarks Dawid. “Painting out rigs is much faster and easier with an all-in-one plug-in.”