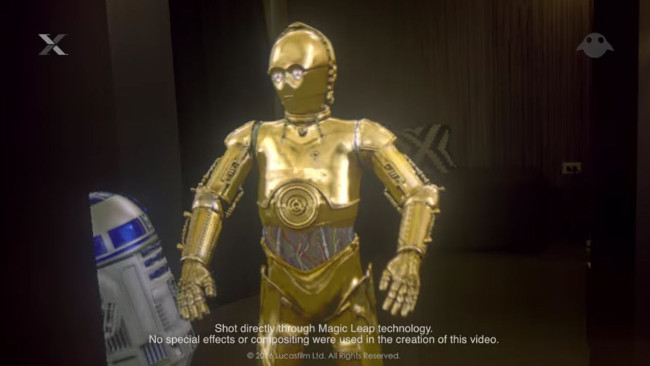 In a new video from Magic Leap, we see what it's like to augment our reality with our favorite Star Wars droids.

Magic Leap has been carefully revealing glimpses of its next generation augmented reality headset in action. The super-secretive Google-backed start-up has released videos in the past that allowed us to see through the Magic Leap headset (or, at least, a close approximation). But today's piece of eye candy has a decidedly familiar and nostalgic flavor. In the following video, famed Star Wars characters C-3PO and R2-D2 show up, very plausibly I might add.

Magic Leap's partnership with Lucasfilm's ILMxLAB hints at future collaborations with Lucasfilm's stable of characters and stories (possibly in conjunction with Disney). Along with its ongoing partnership with Weta Digital, a premier blockbuster VFX house, Magic leap is gathering very powerful Hollywood players that can help put its forthcoming AR product in the best possible light.