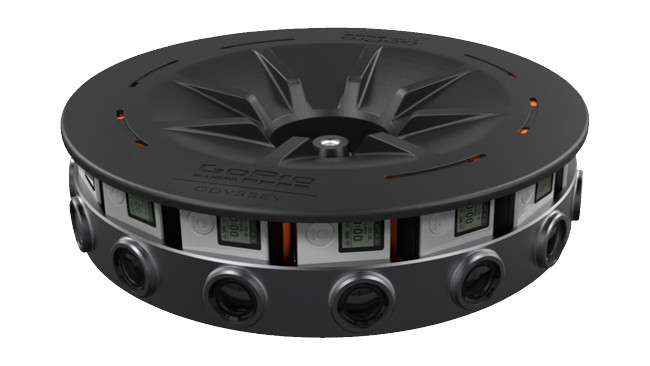 At NAB 2016, there were a plethora of companies exhibiting their own VR rigs that leveraged many GoPros in almost every fathomable configuration. One is left to wonder, after GoPro's announcements of the Odyssey, its pro 360 video capture solution, and the 6-camera Omni, its decidedly mid-tier product, if these companies could survive the GoPro's own foray into VR rig-making. We'll likely know more in a few months, as the Odyssey is now shipping to those with a spare $15K to spend.

Produced with the help of Google, the Odyssey employs 16 GoPro cameras to create stereoscopic 360-degree video at up to 8K resolution (of course, all that resolution isn't viewed at once), similar to the video produced by the Nokia Ozo, which retails at a much higher price ($60K). For $15K, you get those 16 cameras (Hero 4 Black, at the moment), a mic, the rig, cables and a case.

Of course, at this very early stage in VR video, these companies are still finding their way on price points. Over the next few years, as that market begins to mature, we'll likely see these prices for higher-end products to normalize, with clearer technical distinctions at various shelves. But, for early adopters (especially pioneering VR production companies), the GoPro Odyssey or even the forthcoming Omni might be attractive options that carry reliable support and the flexibility of future upgrades, assuming future GoPro camera models retain the same form factor.