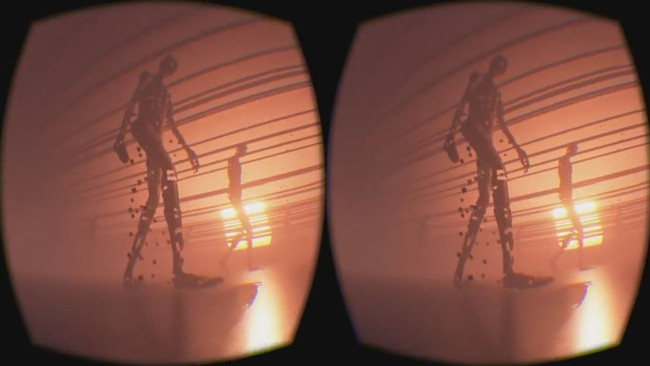 From the VR film Surge

A traveling collection of virtual reality films and experiences aims to build awareness of what's possible now and teases the platform's enormous possibilities.

Although nestled in the rear of the 2016 NAB Show's 'VR and AR Pavilion', the large exhibitor space carved out for Kaleidoscope VR drew visitors to it as if by magnet, leading those curious about virtual reality past other exhibitor booths and into its orbit. My first attempt to check out Kaleidoscope didn't go so well, as all the time slots for that Monday were taken well before I arrived. I made it a point to get to Kaleidoscope early on Tuesday and spoke with co-founder René Pinnell, who shepherded me to the event's most impressive exhibits before it opened for the public that day.

2016 is actually the second year that the Kaleidoscope VR has been in existence. It was founded by Pinnell and Michael Breymann, who was previously a Technical Director at Industrial Light & Magic. The idea was to feature top and up-and-coming indie directors who had entered the virtual reality space and their creations as part of a traveling film festival. This year, however, the roadshow has gained more sponsors, including Jaunt VR (for its NAB offering) and Wired magazine. For NAB Show, the content on-hand has also broadened to include some experiences with greater interaction. There is still the Film Festival that tours North America, but this year there's also a 'World Tour', which aims to bring the best films and VR experiences to eager audiences all over the globe.

The Kaleidoscope VR experience at NAB consisted of a large area of artful swivel chairs, each with a Samsung Gear VR headset playing Film Festival selections, with make-shift partitions in the rear for content that required more interaction. Again, I asked Pinnell to show me what he deemed the most impressive exhibits available as part of its NAB program and his picks were amazing to say the least. He ushered me past the rows of swivel chairs to a station outfitted with an HTC Vive. After some brief instructions from an event rep, I donned the HMD and was off on my own, exploring the amazing Tilt Brush application. For those that haven't heard of it, Tilt Brush is a painting program that allows users to lay down paint in the air in three dimensions. It's like a cross between light painting with long exposures and sculpting, but in real-time, with an array of brush styles that range from the usual (like ink and marker) to the fantastic (such as taffy and stars).

The only reason I stopped using Tilt Brush was that I didn't want to tie up the booth, so that others could enjoy it. It is, quite frankly, my favorite virtual reality experience I've tried thus far and delivers such magic and wonder that even hardened skeptics would be swayed to the pro-VR camp.

The other truly noteworthy experience was a video entitled Surge, but the CG animated film was only part of what made the experience special. Surge, which is a geometric fever dream encompassing a field of decaying giants, was aided by a vibrating vest that was synced to the music and occurrences of the film. The vibrations helped immensely to convey immersion and we will likely see such devices as peripherals for consumer-level experiences as VR gains in popularity.

On the HTC Vive, I also viewed Blu: The Encounter, a film that whisks the viewer to an underwater sunken ship, complete with a massive whale that nearly dwarfs the scene, and a reel of video shot with the new Nokia OZO 3D 360 video camera. These films have their place in the exhibition, but my most enduring memories of the visit were of Tilt Brush and Surge, which may be because I have viewed my share of 360 video and VR films and yearn for the level of interaction or additional sensory input that Tilt Brush and Surge provide.

I left Kaleidoscope at NAB as large crowds began forming around its exhibit. I reentered the real world of NAB, with its litany of boxes with blinking lights, enthusiastic reps and gawking show-goers. But my mind was still strapped into a Vive, spreading light around the scene like so much taffy.