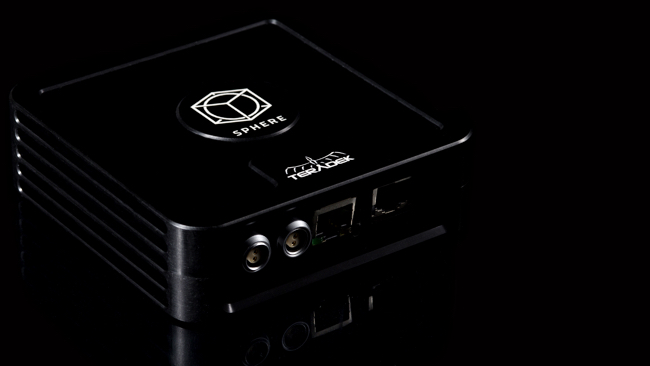 So, just as YouTube switched on its new 360 degree VR service at 10am on Monday, we were going live to air with what could well have been the first live VR TV show to hit its servers.

All this week we're hosting the 10:00 AM show from Teradek's studio in the Central Hall at NAB.

How was the possible and what does it mean to stream a talk show in VR?

Several things had to be in place.

I noticed that just in front of my desk in the studio there was an odd-looking contraption that consisted of four GoPro cameras arranged at 90 degrees to each other, and a Teradek Sphere box.

The output from the four cameras was stitched together by the Sphere to give a 360 degree video field.

The next crucial part was that YouTube, and the exact time of the show, 10:00am in Las Vegas, was firing up its new VR streaming service.

Which meant that, in all probability, we were presenting the first live TV show ever to be seen globally in VR.

You will remember what you were doing on that day for the rest of your lives.

And it does seem to have worked.

Admittedly, the sight of me sitting behind a desk doesn't make for the most engaging VR experience. But a few viewers reported that they were indeed able to look all around Teradek's lovely glass-box studio, and see the cables, chairs, production team, cups of water and all the detritus that is normally comfortingly out of shot.

But apparently it was a pretty compelling experience for those that were able to watch in VR.

The fact that this was all done with equipment costing at most a few thousand dollars was a remarkable testament to how fast VR is progressing.

This is something you could set up in minutes and then stream your event in 360 degree video to the world, live.

Kudos to Teradek for setting this up, and for their Sphere product, which takes multiple camera feeds and streams then as a VR video.

This stuff is just so outstandingly cool that it is clearly with us to stay.