Why an autumn release of Playstation VR makes perfect sense 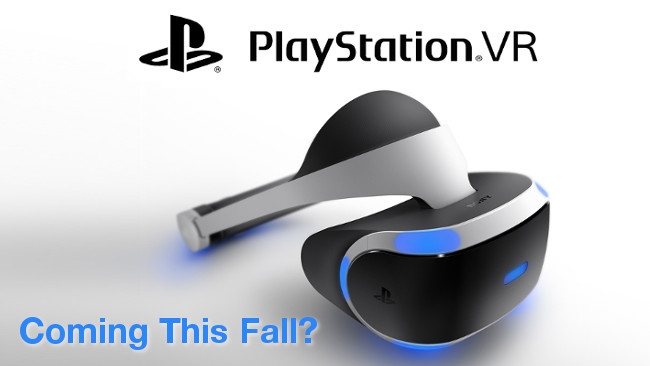 A (presumably) unintentional reveal of Sony Playstation VR's release window sets the stage for what could be the most important Holiday buying season in recent memory.

In a conversation with Fox Business News, GameStop CEO Paul Raines nonchalantly dropped the bombshell that Sony's upcoming Playstation VR (PSVR) would hit his stores' shelves this fall. The timing of the release may frustrate many of the reported 35.9 million (and-counting) Playstation 4 owners who will comprise the PSVR's install base, as Sony has previously indicated that the virtual reality headset add-on to the PS4 would be for sale in the first half of 2016.

Of course, we may never know if Raines' admission was a slip-up or a premeditated leak, but if true, this news does help shape our understanding of the burgeoning VR market, as the PSVR looks to be a major player and quite possibly the most impactful of the home VR devices debuting this year.

Presently, if you're in the market for a consumer VR experience, your choices are limited to Google Cardboard, which is little more than a cardboard box with cheap lenses, and Samsung's Gear VR. Both options require a smartphone for use (in Gear VR's case, a recent Galaxy or Note), but the Gear VR improves the experience with its own sensors, thereby reducing latency over what's possible with smartphone sensors alone.

However, Oculus Rift, the VR headset that jumpstarted virtual reality as a potentially viable consumer platform, is slated to arrive this quarter for a retail price of $599 (not counting the computer). Later this year, HTC Vive will debut a premium PC headset which may boast even better specs and features than the Rift, although price is undisclosed. It's safe to assume that the HTC Vive may be in the same ballpark as the Oculus Rift in terms of price, although many onlookers predict that the HTC will be the more expensive device of the two.

There are a mind-numbing number of alternative headsets from other indie manufacturers in development, many finding success through crowdfunding sites like Kickstarter and Indiegogo. None have really emerged as contenders, especially with reports that both Google and Apple are kicking their own VR efforts into high gear. There's even a rumor that Google will release its own standalone VR headset that does not need a smartphone to function this year.

Okay, let's assume that some of the advance word about the PSVR is true, namely release window and price. There are rumors circling that the PSVR unit will retail for $299, with a bundle that includes Motion controllers and a PS4 Eye camera for $428. When price is considered, it makes the fall 2016 release window all the more plausible.

As Oculus races to its Q1 2016 release for the Rift, it stakes its claim as 'the' VR company or, rather, the company with the most premium VR experience available. Eventually, HTC will have something to say about that, but the Oculus Rift is already more well-known than the Vive (to casual observers, anyway) and will have a head start to solidify itself in the public's consciousness.

You may have heard the shock statistic that only 13 million PCs worldwide will be able to run the Oculus Rift at launch, according to the company's stated required specs for PCs. Virtual reality-deniers point to that number as proof that VR is not yet ready for consumers, citing that an 'Oculus Rift-ready' PC would cost at least $1000, putting the assumed price for entry at around $1600, not including games. But this thinking represents a misunderstanding of PC gamers' relationship to their tech. Hardcore gamers, i.e. those in the market for a Rift, likely own computers that will be able to run the Oculus Rift at lower settings. And many of those hardcore gamers could easily update their current systems to run the full Oculus Rift experience by buying a new graphics card or more ram, which are very simple user installations. In fact, gamers routinely upgrade their systems to get the desired performance for the newest games, so doing so to have a better Oculus Rift experience shouldn't be a deal-breaker.

Go to any comment or forum thread about the Oculus Rift that's populated by gamers and you will find a popular refrain: "I've put in my preorder - when it arrives, I'll figure out what else I have to buy after testing it with what I got."

In other words, the pool of potential Oculus Rift users is much bigger than 13 million and I seriously doubt that the Oculus Rift will be a 'flop'. It will probably have a few months to reign as the 'best' VR device…

What does this have to do with the PSVR? For starters, by waiting until the fall, Sony doesn't have to compete directly with Oculus for the attention (at least, not yet). And a later release takes some pressure off the PSVR, as Oculus will bear the initial burden of defining what premium VR is to most consumers.

Regardless of how well Oculus Rift does in the early-going, the PSVR will arrive as the mid-tier option: an apparent step-up from Cardboard and Gear VR options that somewhat approaches the experience of the Oculus Rift, yet at a cheaper price. The distinction between console VR and PC VR is very similar to the distinction between console and PC gaming. Those that crave the highest of high-end experiences will go the PC route; those that are okay with an almost high-end experience will gravitate to the console. And, traditionally speaking, the console gaming market is much larger than the high-end PC gaming market.

Couple the PSVR's designation as the sole mid-tier option on the horizon with a fall release, let's say, a month into the school year, add an install base which could reach 40+ million by then, ample third-party support and a track record of making quality gaming devices and you have the makings of a hit product which could dominate the Holiday buying season. And a strong showing for the PSVR could cement virtual reality as not just a viable development platform, but a consumer powerhouse which will inevitably spark even more excitement and development of new immersive products and experiences…

Unless Google decides to crash the party with its own standalone VR headset, in which case, all bets are off...