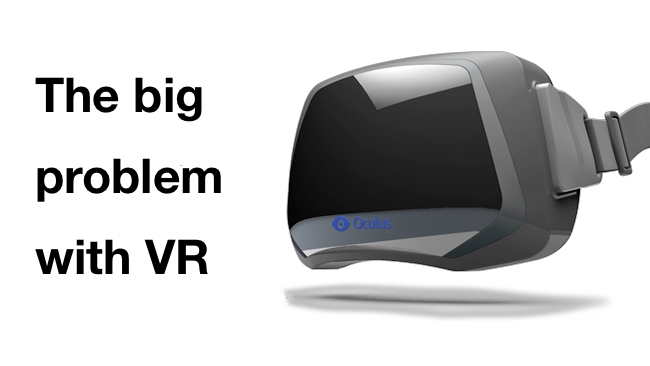 There's a very big problem with VR, and it has nothing to do with the viewing technology.

First of all, I want to make it quite clear that I think VR is a very viable technology and that it's about to become much more widespread. Problems of resolution, latency (or "lag") and the cumbersome nature of VR headsets will disappear. None of these is the big problem.

The big problem is that in order to have a VR experience, the content has to come from somewhere.

In some cases, that's not an issue, because it's automatically or algorithmically generated. For example, it's easy to imagine looking through a pair of AR glasses and seeing street names superimposed on the real view of a city. And it would be simple to arrange for a person's name to appear on their forehead as the result of facial recognition.

But this article (which is mostly correct apart from this) suggests that:

"With the help of virtual reality, a young student learning about dinosaurs in the Jurassic period won’t have to just read about it in a textbook — they’ll be able to put on a VR headset and literally explore the VR-equivalent of Jurassic Park.

Students studying physics will be able to “step inside” a virtual environment where they build (and destroy) huge structures, fly through the planets, and stand next to a virtual Isaac Newton as he discovers his laws of motion."

There's nothing wrong with this technically. It could happen. But the problem is that all of this content has to come from somewhere. It has to be created.

In a sense there's nothing new here either, because computer games are virtual worlds where you can move around, search for things and explore new environments. It's easy to convert computer games to virtual reality experiences. In fact in some cases, there's nothing to convert at all. All it would take would be a suitable driver for a VR device, because all the information needed for a 3D virtual world is already in the game: it's just that the way of viewing it has changed.

The problem is that to create a virtual world, someone has to create everything in it. You can't just say "let's illustrate this point about a historical incident in VR" without creating a whole world, that's as big as the degree of freedom you give to the VR user.

These scenarios are indistinguishable from computer games, and you would incur computer game costs to make them possible.

Remember that making a modern computer game can cost as much as a feature film - or more.

Now it's true that there's a lot of money behind education. There's nothing to stop someone setting up a company to create, say, historically accurate VR scenarios. If these found widespread use, then it's just possible that they could be financed. You'd probably need every school in the country to agree to pay for it but it's feasible as some kind of national curriculum.

But it would be a never-ending process. To keep up with the potential demand, it would require a huge new creative industry. Obviously for content creators, this is no bad thing, and it may happen. But while we're getting enthusiastic about the potential reach of VR and AR, let's not lose touch with reality itself, and forget that it takes huge resources to create virtual worlds.