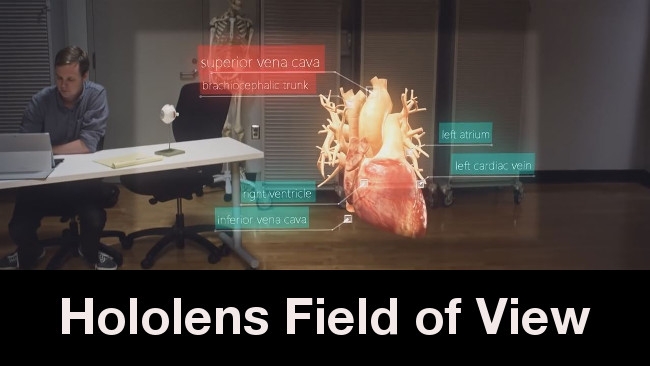 Microsoft has finally provided a clear indication of the field of view for its upcoming Hololens augmented reality headset. And while some pundits have decried the rather limited results, it may be a non-issue for its core customers.

Since the announcement of the Hololens and its run-up to launch (presumably sometime this year), there has been something of a disconnect between Microsoft's renderings of the experience and what we're hearing from those that have actually tried the demo models. Critics, while nearly universal in their overall praise for this early generation AR product, can't help but mention the narrow, rectangular field of view, which is likely no more than 40x20 degrees (for comparison purposes, the consumer version of the Oculus Rift will likely be 110x110 degrees). When taking into account that humans have approximately 180 horizontal degrees of vision, then the FOV of the Hololens seems even smaller. Yet all of Microsoft's Hololens featurettes eschewed showing the user's field of view, instead opting for setting the camera back and placing CGI imagery in the scene, with Hololens wearers regarding the images as if they fully occupied the three-dimensional space.

Perhaps to appease the project's most vocal critics or to manage expectations for the Hololens, Microsoft, in conjunction with Case Western University, has released a featurette that actually approximates the Hololens FOV.

What degree of importance?

Those that expected a more expansive augmented reality experience, with objects seemingly springing from a user's peripheral vision, may be disappointed by this admission from Microsoft, who has communicated that the consumer version of the Hololens's FOV won't be noticeably different from the above picture.

But does this limited field of view really matter? Constraining the augmented reality experience to a relatively small window will impact the gaming experience, although I suspect that there will be ample games produced for the Hololens. If the goal is a gaming experience that feels as visually encompassing as what's possible with the Oculus Rift and HTC Vive VR headsets, then the Hololens stumbles a little out of the gates. However, Microsoft's CEO Satya Nadella, in an interview with ZDNet, makes it clear that while Hololens will have games, it is not being positioned as a gaming device:

Nadella's comments make a lot of sense when considering the almost limitless potential uses for the Hololens in engineering, medicine, laboratory science, archeology, throughout academia - in fact, it's difficult to think of an industry that wouldn't benefit from the Hololens or a similar AR device.

Regardless of how we intend on using the Hololens, at least there isn't any further confusion about what the Hololens' FOV is and isn't. And the fact that Microsoft is nipping this question in the bud now means we're rapidly approaching the day when customers will be able to judge the Hololens, limited FOV and all, for themselves.