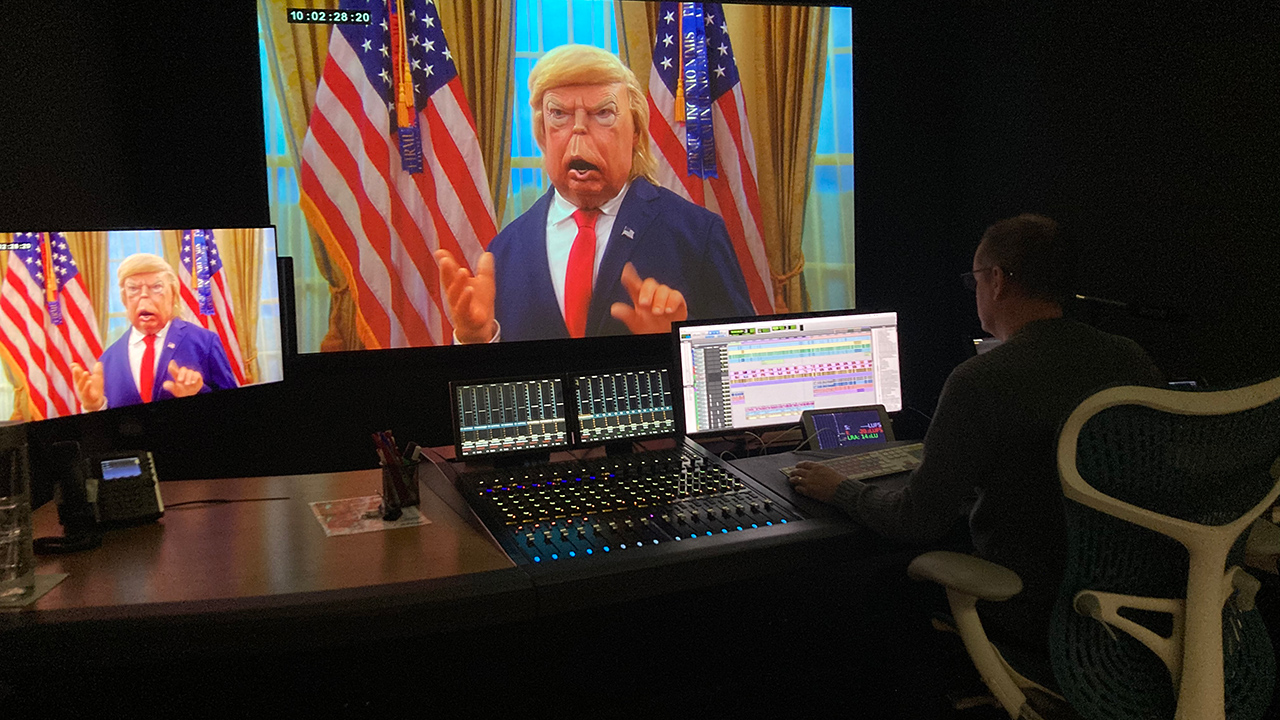 The scabrous, puppet-based topical comedy show was resurrected for the unprecedented insanity and uncertainty of 2020. The puppets are as unflattering to their subjects as ever but the voices also have satirical bite. Kevin Hilton looks at how impersonations of the great, the good and the not so good were produced.

Many television programmes are promoted on one central character or a single aspect of the story, when, in reality, there are other elements that work with the most recognisable feature to make a well-rounded whole. Spitting Image won notoriety and high viewing figures when it first appeared in 1984 for being the Sunday night satirical puppet show featuring exaggeratedly grotesque puppets of politicians and celebrities of the time.

While the latex caricatures, created by Peter Fluck and Roger Law, led the way in lampooning the likes of Margaret Thatcher, Ronald Reagan, Pope John Paul II and the Royal Family, the voices of these figures also played a major part in not only establishing the character but parodying them further. Even when the scripts were short on gags or really biting satire, the impersonations could, along with the puppetry, be relied on to hit home. The original series, which was produced for the ITV network by Central Television and ran until 1996, turned out to be a proving ground for upcoming talent, including Steve Coogan, Chris Barrie, Rory Bremner, Jan Ravens, Kate Robbins, Harry Enfield and the late John Sessions.

Spitting Image thrived on the dogfight politics and 'Me'-oriented celebrity culture of the 80s but eventually ran out of steam in the more sharing-caring 90s. Rumours of its return began in the 2000s and after being confirmed in 2019, last year proved to be the perfect time for a harder and unrestrained style of topical humour to make a comeback. Now produced by Avalon Television for subscription streaming service BritBox, Spitting Image had ready-made targets in Donald Trump and Boris Johnson (unsparingly impersonated by Matt Forde), all against a backdrop of the coronavirus pandemic.

The audio production of the 21st century Spitting Image differs from its predecessor in a number of significant ways. The most obvious change was the decision to use US voice talent in addition to British performers, which Nick Fry, sound supervisor on Spitting Image, says was taken "early on". Fry is head of audio at The Farm Group (and is pictured in an audio suite dubbing a Trump sketch), which is where the various voices were recorded, edited and prepared for synching up with the pictures.

"The brief was to record multiple voice-overs, with multiple artists, remotely and locally, across two continents," Fry explains. "From those recordings we had to create a soundtrack for more than 120 sketches - including songs - across 12 weeks. We also had to record and mix five topical sketches on a Wednesday or Thursday that had to be ready to deliver a show for Friday lunchtime prior to being streamed on Saturday. At the end of the main record day, the US talent was all booked in to allow for the time difference with Los Angeles."

Remote production was already going to be part of recording process but the onset of coronavirus meant it became even more important. Fry estimates that 70 percent of all the voice-overs were remote, including some in the UK. "Due to COVID there was a mixture of voice artists attending the Farm buildings and some recording from home," he says. "As we went along more artists would dial in remotely but The Farm also has many COVID safe procedures in place for any visiting voice-over artists and clients."

To enable the remote connections, three web browser-based technologies were used: Source Elements' Source-Connect Now, SessionLinkPro and Cleanfeed. "Whatever we were booked to record on a particular day - songs, ADR to picture, wild voice-over - and how many people were dialling in at one time would dictate which technology we used," comments Fry.

On the 'old' Spitting Image, many of the voice performers would also operate the puppets, enabling them to synchronise the puppet's mouth movements with the speech. The 2020 version was produced more like an animated film or TV show, with the dialogue being recorded first. "Most artists were recorded individually but a few sketches were done with multiple performers mixing some remote and some local at The Farm," says Fry. "Sometimes we had clipping in the system and popping on the microphone - not being able to see the artist makes it harder to control this - but most of these problems were fixed using iZotope RX plug-ins."

At the same time the dialogue was being recorded in one suite, the audio edit would begin in another. Recording and editing was carried out on Avid Pro Tools 2020.4 workstations, with each sketch being compiled in preparation for the studio shoot. "We were effectively creating an offline edit of the sketch with just sound," explains Fry. "Beeps were added to the front of the compiled sketches to help cue the puppeteers. They then synced movement to the playback in the studio."

The audio was mixed both 'in the box' on Pro Tools and using 32-fader Avid S6 consoles, which worked in conjunction with MTRX interfaces for routing and monitoring. WAV files were generated for AMWA AS-11 media file delivery to BritBox. Once the sketches had been shot with the puppets, rushes were sent to the picture editors for trimming and compiling into finished episodes. Fry says that because of this and the need to react to breaking news stories, The Farm's workflows were changed for this project, with the introduction of a Dell EMC Isilon storage network for the sessions.

"Historically, all our media was stored locally in each studio but due to the different workflows and a team of mixers working across the series, we decided early on to move all the sessions to a network volume," Fry comments. "This allowed us fast access to any sketch that was needed particularly for changes on delivery day. Each show is made up of 'banked' sketches [non-time sensitive material] and topical sketches, which are made nearer to transmission. We have even recorded new voice-overs on the morning of delivery."

The result has been to make the audience hear politicians and celebrities in different ways, which adds even more to the parody and latex grotesquery.

Spitting Image is streaming on BritBox, with clips on the Spitting Image YouTube channel. A second series has been confirmed for autumn 2021.