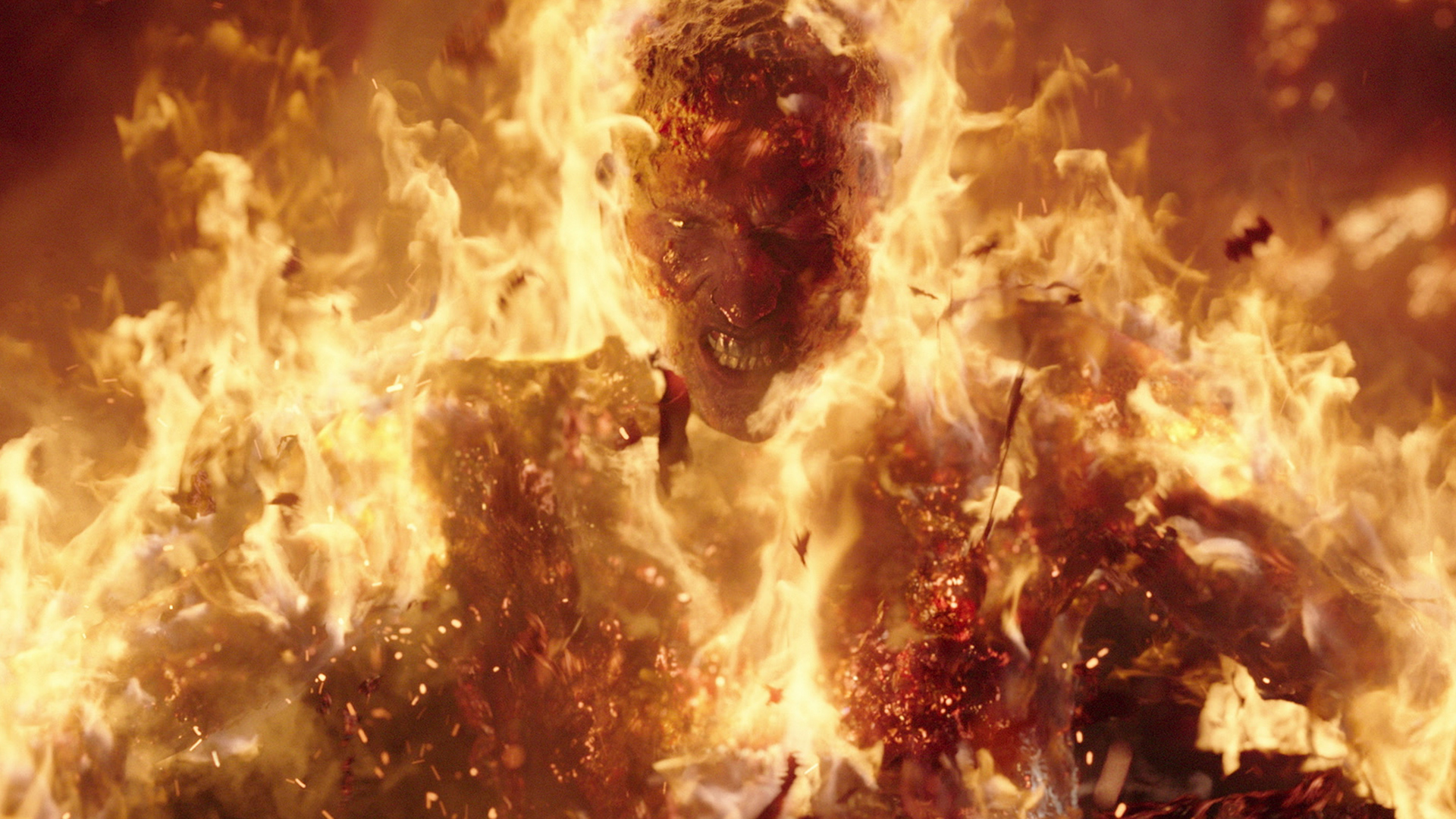 Sometimes being a filmmaker is as close as one can get to having a super power. Artists can use their imagination to conjure up characters and stories or create sounds and images in contexts that we’ve not experienced before.

VFX Supervisor Ivan Moran (Salt, Mowgli: Legend of the Jungle) was called on to use all his technical and creative nous when he landed the gig for Netflix entertaining sci-fi feature Project Power.

“I joined the project very early on which meant that I had a hand in a lot of the initial concepts,” he tells RedShark News. “My overriding goal was to avoid creating full body or full-face digital characters but to shoot as much as possible using real world elements and augment that reality.”

Moran, who works for Framestore, worked client-side as Netflix’ overall VFX supervisor on the show, while Framestore VFX Supes João Sita and Matthew Twyford delivered 400+ shots that took in expertise from the studio’s concept art, vis dev and VFX teams.

“We made sure to root the drug’s side effects in actual science - from subatomic vibrational physics theory through to potential innate DNA from animal biology,” explains Moran, who took on the task of researching the story’s “pseudo-science”. The aim, he says, was not only to dazzle the audience but help them suspend their disbelief by giving each power a plausible, real-world backdrop.

The art of vis dev

Directed by Ariel Schulman and Henry Joost from a script by Mattson Tomlin (who also had a hand writing upcoming DC reboot The Batman), the film stars Jamie Foxx and Joseph Gordon-Levitt in a world where a new designer drug can, for good or for ill, unlock five minutes of latent power in the person taking it.

The VFX team began by designing the pill, including the drug’s reactive eye effect — a key indicator that the character had succumbed to its superpowers. Framestore’s vis dev team rebuilt the human eye with its intricate iris strands and blood vessels using fluid dynamics and volumes.

“The challenge was to make it look like it’s freezing in a way that isn’t terrifying — it was massively complicated and looks stunning,” says Twyford.

The film was shot on ARRI Alexa LF and Alexa Mini, the favoured imagers of DP Michael Simmonds. He wanted to lend the show a “deliberate accidental” style in keeping with the film’s realistic aesthetic.  “His style is documentary like, very visceral,” Moran says. “We rarely changed the composition in post.” 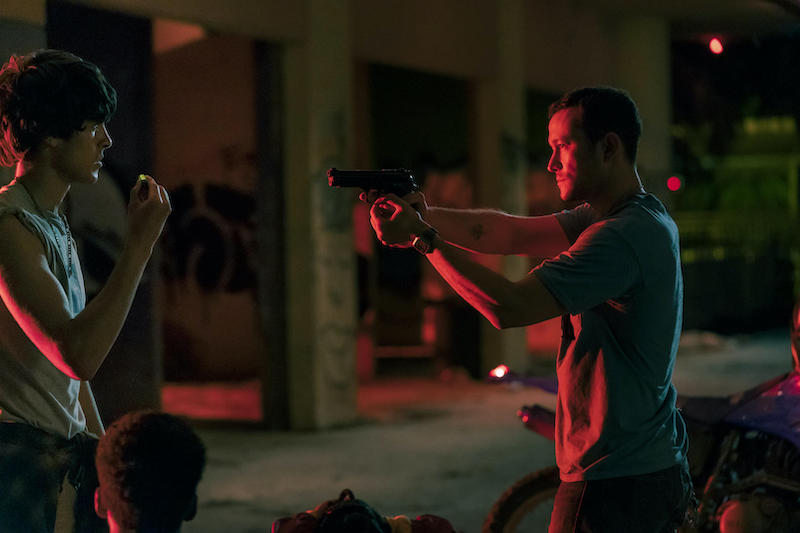 Some VFX sequences required high speed photography using Phantom Flex 4K and the Sony Venice. A key one early in the film sees a full-frame shot of Frank (Gordon-Levitt) staring into the camera as he takes - and survives - a bullet point-blank to the head. The slow-motion sequence was filmed at 800 fps. Gunsmoke was simulated referencing real gun shots filmed at over 70,000 frames per second.

“The challenge was to precisely recreate the timing of the ripples and the hair movement from the plate which was achieved on set with a high-velocity blast of air,” says Sita. Referencing an armadillo’s leathery protective shell for the sequence’s distinctive look, the team sculpted the folds and ripples in CG, adding full digital hair onto Frank’s head, so as to perfectly time the hair lift and to disguise the constant wind through the actor’s hair from the air gun used on set.

In another scene, Frozen Girl (Jazzy De Lisser) sees her body transform into ice. This was shot in one single two-minute take comprising 2,000 frames and took nine months to complete.

“The amount of detail in that shot is incredible,” says Moran. “Jazzy is constantly moving, trying to escape from a circular tank while ice crystals grow over her skin and her breath fogs the glass.”

The actor’s performance was body-tracked. The team had to remove the reflections of the camera crew from the glass while also matching the multiple flashing light sources from the room outside the tank.

“We played the shot in realtime and every single frame had 70 lights that needed to be manually art directed, coloured, calibrated and matched from camera references so that all ice on her body could properly interact with her skin,” says Sita. 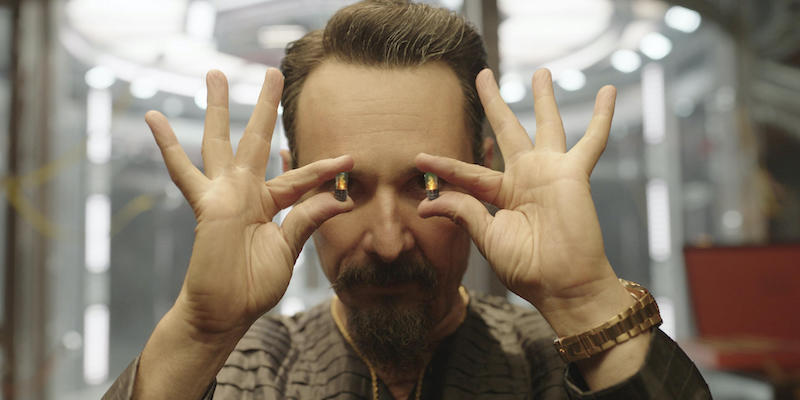 Another sequence sees the chameleonic Camo Guy robbing a bank. This character’s powers were inspired by the cuttlefish, which has the ability to mimic its surroundings.

“The work on the character was tested before main photography as a 2D based look which proved that Camo Guy would have an interesting effect, but lacked some of the lighting and more dynamic patterns in its cells,” Sita explains. “We called on FX and lookdev to achieve that additional motion and subsurface look with the texture and reflections embedded in his body in compositing. We matched the plate for lighting and adjusted his skin wetness and specularity to get a more interesting shape.”

The superpower of the character called Biggie (Rodrigo Santoro) sees him almost double in size, transforming into an imposing, asymmetrical beast-like figure that towers over his surroundings.

“The plates were shot in a miniature set,” explains Sita. “This helped us work out how big the actor should be, and how he’d be interacting in an environment where he looks much taller.”

Working with these plates, Framestore’s tracking and CFX teams performed detailed plate augmentations as they matched Biggie’s on-set prosthetics with a series of CG body parts and muscle jiggles. The FX team created gruesome tumors and intricate veins under his skin, deforming Biggie’s face to one side to finalise the grotesque transformation.

Another 600 shots of mostly ‘invisible’ effects including a giant container ship were created out of Canadian facilities Outpost VFX, Distillery and Image Engine.