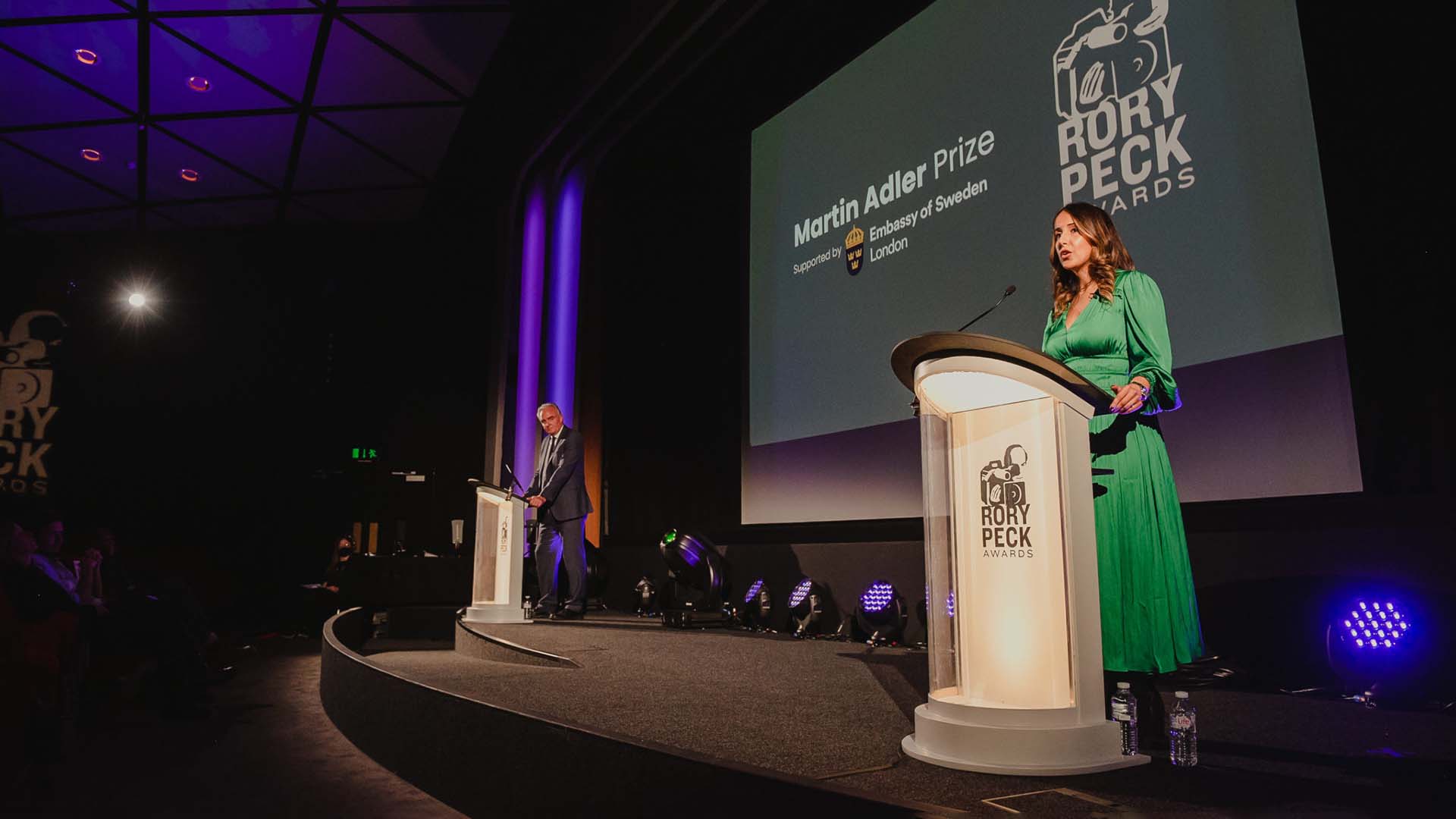 The annual Rory Peck Awards took place in November once again at BFI Southbank in London. As always they are a great opportunity to take the temperature of news and current affairs filmmaking.

Rory Peck was a cameraman who died in the course of duty in Moscow in 1993, and the Rory Peck Trust does fantastic work supporting freelance camera people internationally through training, security, insurance and grants to cover freelancers’ basic needs.  Unique in the world, the trust also supports freelancers’ physical and mental health and lends support to their families. In these current turbulent times, they are needed more than ever.

You can not avoid feeling humbled when you witness the intense pressure and danger these filmmakers undergo to bring back footage to our screens. It is also a credit to current technology that we are now in an age where small, unobtrusive cameras can enable the lone filmmaker to produce first class images in almost any situation. All the selected films go far beyond our expectations of everyday news and current affairs – they are great documentaries in their own right.

The Awards are broken down into four sections: News, News Features and Current Affairs plus the Martin Adler prize, a non-competitive award that honours a local freelance journalist or field producer whose work with international media outlets has made a significant contribution to newsgathering – often this is a ‘fixer’, a crucial, underrated and generally underpaid person often working in extremely dangerous circumstances. This year it went to Riana Raymonde, a freelance journalist from Madagascar, tackling dangerous and contentious issues like corruption and environmental crime.

The News Award went to Solan Kolli for coverage of Ethiopia’s Tigray conflict, a serious and underreported conflict. A communications blackout and restrictions on foreign journalists meant the military conflict could only be documented in the aftermath. As the jury said,  ‘It was a powerful and sober approach to what was happening in Tigray and the entry was impressive in its reach. His work was bold and brave with understated interviews.’

News Features award went to Brent E. Huffman on the Uyghurs who fled China and now face repression in Pakistan. Another devastating conflict about which most of us have heard something but probably understand little. Over a five year period Huffman travelled to Paksitan five times to gain the trust of the community in hiding there. By focussing on Uyghur activist who operates an underground railroad in Pakistan, smuggling persecuted Muslims into other countries, this solidly researched and sensitive film makes a complex story human and accessible.

Finally, the Sony Impact Award for long form Current Affairs went to Joshua Baker’s Return From ISIS: A Family’s Story, shown in the UK as part of BBC’s Panorama series. This is an extraordinary film about Samantha, a small-town American woman married to a Moroccan, who ending up in Syria working for ISIS.  Central to the story is Mathew, her young son by previous partner, who was used in a notorious ISIS propaganda video in Syria and filmed by his stepfather enthusiastically making a suicide belt and taking apart an AK47. Samantha herself went threw an astonishing ordeal, helping her husband buy and abuse sex slaves and suffering  torture at the hands of ISIS.  Mathew is now safely back in the USA while his mother remains in a US prison. This meticulously researched film, shot over four years, is very compelling, not least by the way it is structured. There is a question at the heart of the film – was Samantha a victim of circumstances, or a willing accomplice to terrorism? – which keeps you hooked to the very end. The interviews with the various family members, in both the USA and Syria, are both sensitive and incisive. Largely made by one person, Return From Isis transcends the current affair form to become a great documentary in its own right.