The great Fujinon broadcast zoom lens roundup. Which is best for documentary?

Phil Rhodes thoroughly tests out five of Fujinon's broadcast zoom lenses to find out what each of them offers documentary style filmmakers. 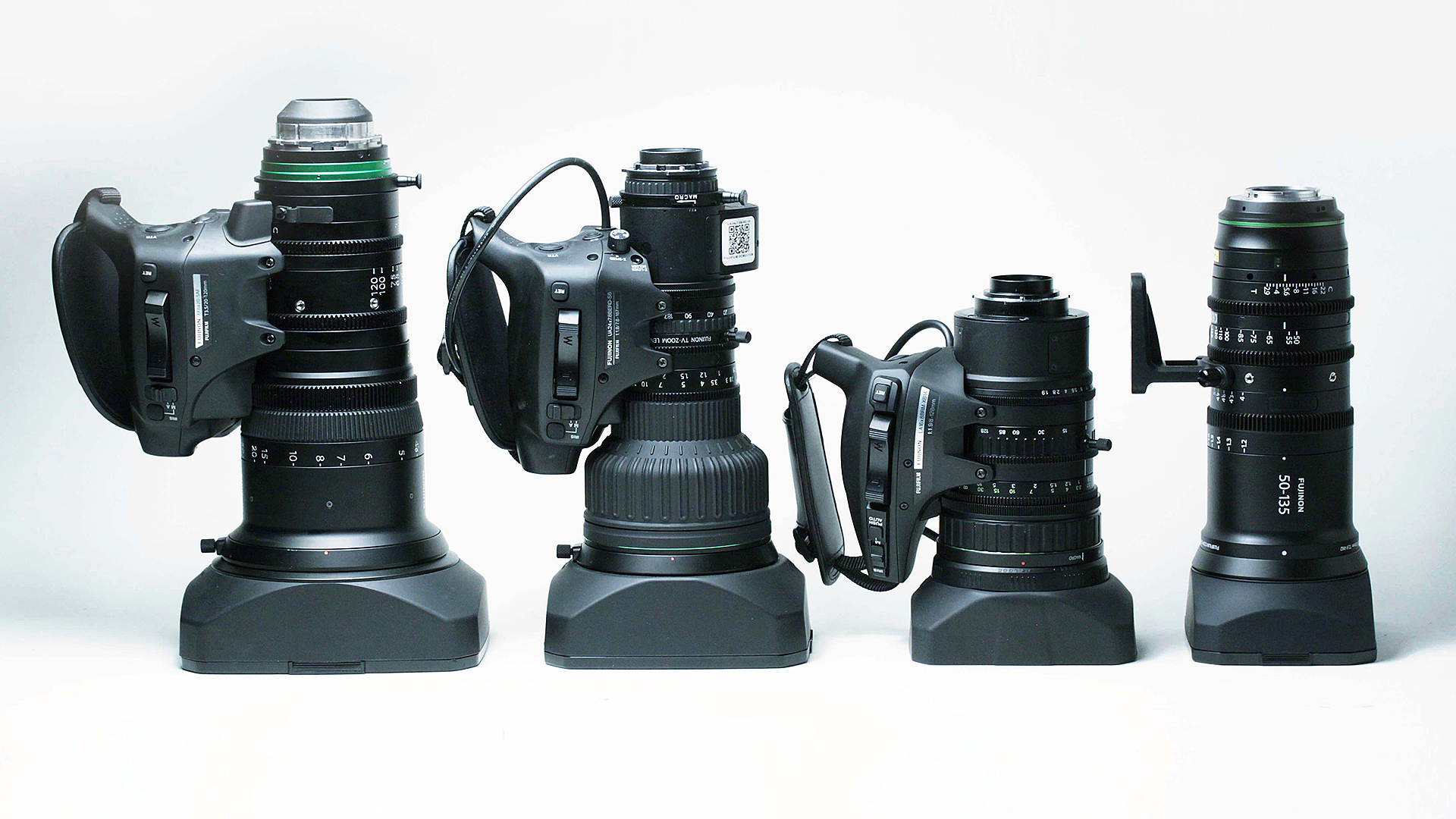 Lenses get talked about a lot, and the subject is almost always primes and tiny details of colour, flare and focus behaviour. On the other hand, most of the moving image material that’s actually shot in the world is done with zooms, and zooms have become a lot trickier since modern, high resolution, big-chip cameras became normal. No longer can a documentarian shoulder a 16mm camera and a lightweight zoom and be confident of taking on all comers.

The lenses I'm looking at come from Fujifilm, a company which is very good at zooms and has generously allowed us to get a large collection of lenses together in one room and have a semi-scientific play around. While other brands of zoom lens are available, it’s a deliberate decision to stay with one company so I can talk about the engineering realities, which apply to everyone, and minimise the politics. I'm also looking specifically at options for documentary, so I won’t consider the huge cinema zooms that are slyly being used to shoot more and more single camera drama. We’re interested not only in pictures, but bulk, flexibility, economics and operability for various applications.

Fujifilm supplied five lenses: the MK18-55 and 50-135, which were used on the X-T4 camera, the LA16x8 and UA24x7.8 broadcast zooms, and the XK6x20 PL-mount zoom, which were all demonstrated on the Ursa Mini Pro and Broadcast cameras generously loaned by Blackmagic Design.

Treating the MKs as a pair, the most affordable option here is the Fujinon LA16x8, which was more or less built for the Ursa Mini Broadcast, though it also works nicely on a suitably adapted super-35mm camera with a centre crop feature. The layout is not quite the same as a classic ENG lens, with no extender or back-focus adjustment, and the macro is on a sliding section of the focus ring. Mainly, though, it operates in much the same way as every other broadcast lens, and it’s exactly the right size for the camera, creating a small, light, nimble package that’s bursting with usability and extremely affordable. 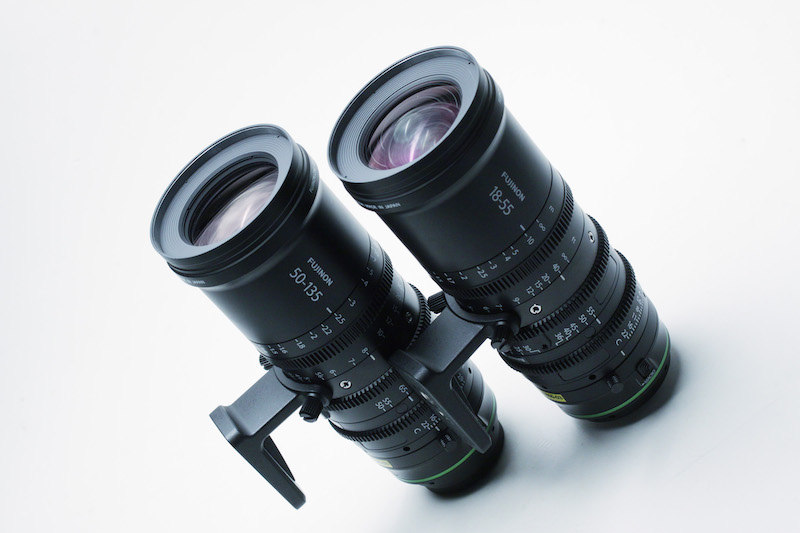 The LA16 handles 8-128mm at f/1.9, with the significant caveat that it lacks a 2:1 extender and therefore covers only 2/3”-sized sensors, the particular setup of the Ursa Mini Broadcast, or cameras with a crop mode. Packing almost 4000 horizontal pixels onto a chip small enough for an un-extended broadcast zoom to cover it is a big, big ask, and the performance is not what we might expect from a super35 cinema camera, but it the small chip highlights the problem with demanding big, expensive sensors. It has the tendency to make lenses big and expensive too.

Ultimately, the LA16 gives people a lot of what they want at a very decent price and with a minimum aperture that’s morethan enough to simulate the depth of field of a mid-century feature film regardless of sensor size. Single-camera drama is not the intent, of course, and the build is perceptibly lighter than spendier options, but the intent is that it’s an entry-level broadcast lens. That’s something it does very well. The LA16 tells us a lot about why we can have certain things under certain circumstances.

The LA16’s very, very big brother is the mighty UA24x7.8, which reaches out to a mildly-staggering 187mm at f/1.8 before we even consider the extender. It is part of Fujifilm’s most capable range of broadcast lenses intended for high end 4K television work. It’s also the biggest budget option here, and in some ways it stands in as an example of many broadcast lenses that can be pressed into service via adaption to big-chip cameras – though most of them probably won’t be quite as sharp as this.

Again, there is the issue of intent. Broadcast lenses like the UA24x7.8, and to a lesser extent the LA16x8, are built in the knowledge that at the extremes of their capabilities – full zoom, with the extender, wide open – they are not intended to compete with cinema primes. Huge engineering effort has minimised the tradeoffs to the point where it’s possible to shoot a very distant black cat in a coal mine at night and make a broadcastable 4K image anyway, and that’s the design goal.

The UA24x7.8 should be 15.6mm at the wide end, but seems slightly less wide than the super35-native XK6x20 (20mm) because of the adaptor magnification. Still, it looks good.

This is the UA24x7.8 at about 100mm, close to the XK's maximum. Is it as good - no, but this is two whole stops faster and it goes out to 400mm. Notice the aberration is fairly achromatic.

The 24x7.8 sits nicely on an Ursa Mini Pro with the shoulder pad and viewfinder all the way forward and an Anton Bauer Titon 150 on the back. Potential users will be delighted to discover that it covers the 3840-wide UHD area with the extender in. It just barely clips the corners of the 4096-wide area, but could still be used to shoot almost any wider aspect ratio than 16:9. There is some concern that we’re using parts of the lens here that were not meant to be seen by human eyes, but the performance, as with any broadcast lens, is good so long as we avoid the very outer edges of what it will do.

Part of the reason it’ll do this is that Blackmagic’s own lens mount has optical parts, as every B4 adaptor for single-chip cameras must, which provides some magnification. As such the effective focal length is slightly more than we’d expect. The 2:1 extender implies that the lens becomes a a 15.6 to (yikes) 374mm lens at roughly f/2.8, but the magnification of the adaptor makes it look slightly less wide than the widest end of the XK6x20; it’s probably a hair over 20mm effective. There are adaptors, including those by MTF Services, which provide slightly more magnification than this and might allow greater coverage, albeit at a small further reduction in exposure.

In the next part we'll look at the performance that the lenses offer.