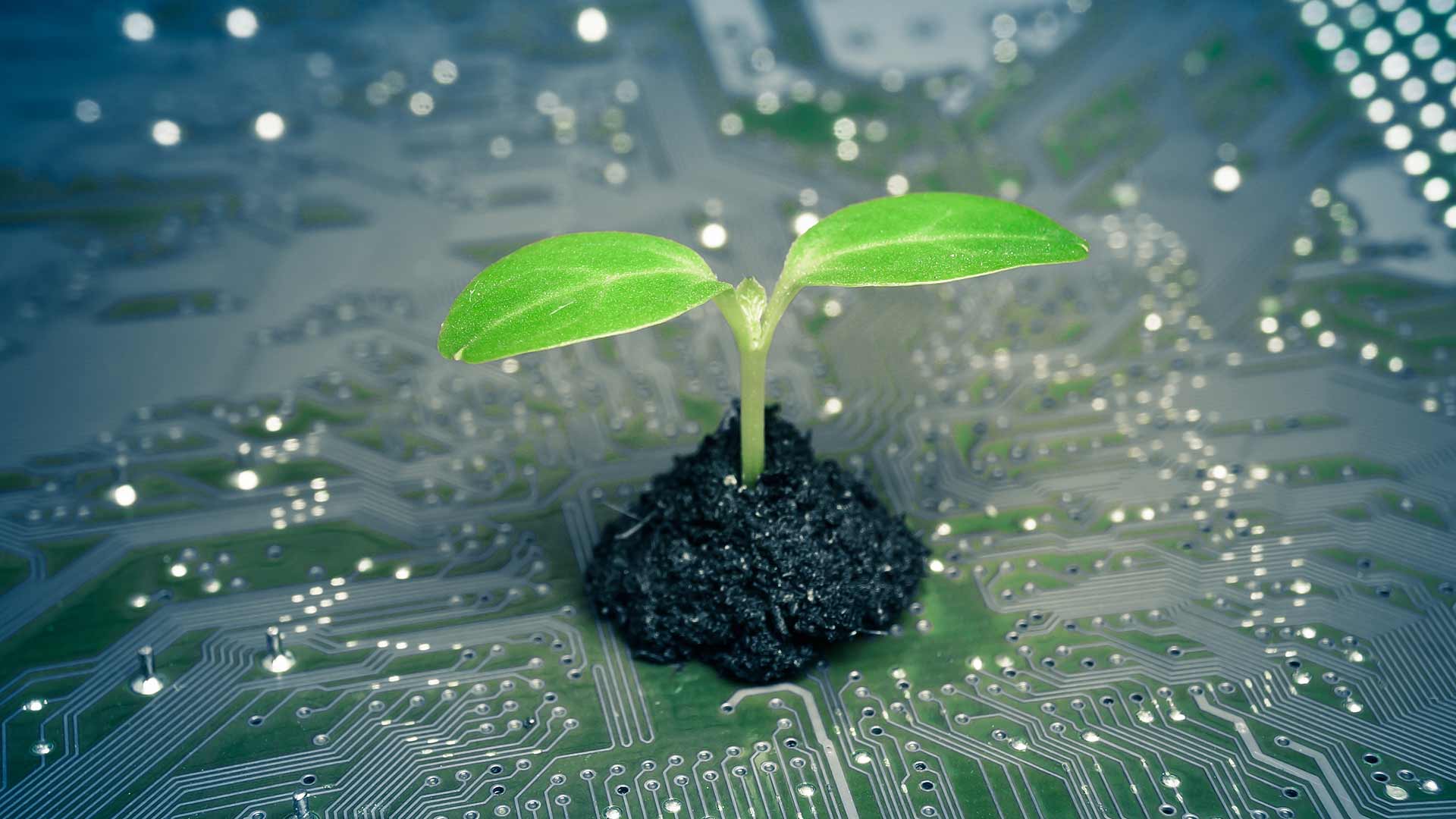 Anyone aiming at sustainability or interested in running a carbon neutral production needs to pay attention to small details and that includes some of their computing choices.

On 18 May (2021), police raided a building in the West Midlands region of the UK suspecting they were going to find an illegal cannabis farm. A police drone had detected a large amount of heat coming from the building, which is often a giveaway that there is a serious hydroponic operation being mounted inside. However, what they found inside was a rather different type of hashing in progress and not 100 thriving cannabis plants but 100 specialist Bitcoin mining units that had been hooked up illegally to the local grid and were stealing electricity and creating a lot of heat while they did it.

Bitcoin’s recent hike in prices (even at time of writing it’s still 265% up on its year on year value, despite being around half the value it reached a few months ago) has made mining it profitable again — even more so if you steal the power to do it! Currently it’s estimated that the Bitcoin network is consuming 114TWh (terrawatt-hours) per year, somewhere between the yearly energy needs of The Netherlands and the United Arab Emirates, and that figure is rising all the time.

It’s a story that the news media have filed resolutely under ‘quirky’ but it does illustrate a point.  And while Bitcoin’s energy use is well-documented, there are numerous other energy decisions we make on a daily basis that are less so. Researchers at Lancaster University found that streaming a HD film has the equivalent energy use of boiling over 10 kettles of water. On a larger scale, the UK-based industry sustainability organisation albert estimates that the average hour of television produces 9.2 tonnes of carbon dioxide emissions.

The organisation’s 2019-2020 report in its entirety is fascinating reading and worth a look for its detailed breakdown of impacts alone. Drama was the worst offender last year, if you want to couch it in those terms, at around 37.5 tonnes per hour, news and sport the least at 1 tonne and under. At over 50 tonnes, large international factual productions (think wildlife ) can be the worse — it’s just that none were being shot in the period of the report. The biggest single contributing factor to carbon emissions? People transport. It will be interesting to see how Covid will have changed that in the next report. 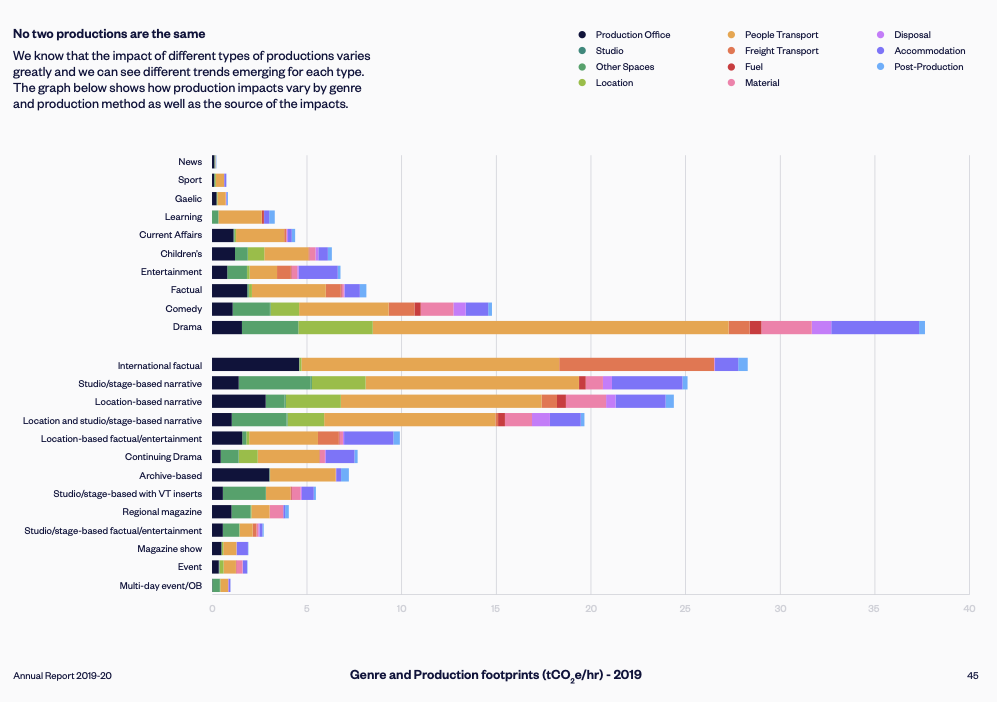 Post’s contribution is small in this context, well under 1 tonne per hour of content produced, but it’s here that we can get one of the most telling glimpses into the ways that the choices we make can have significant impacts.

Video Shouldn’t Cost The Earth is a recently published report put together by Blackbird Video and environmental management consultancy Green Element. As part of it they looked at different emissions levels generated by different modes of editing on a live sports event: cloud native, cloud-based, and on-prem. As expected, the on-prem workflow was the least carbon efficient. There’s the travel, of course, plus the impact of establishing the on-site production rigs, all of which resulted in on-prem having double the emissions of a cloud-based editing workflow when it came to producing 40 hours of TV from a single-day event. What’s really interesting is that in turn is double the emissions levels of a cloud-native solution (in this case, using the Blackbird NLE). 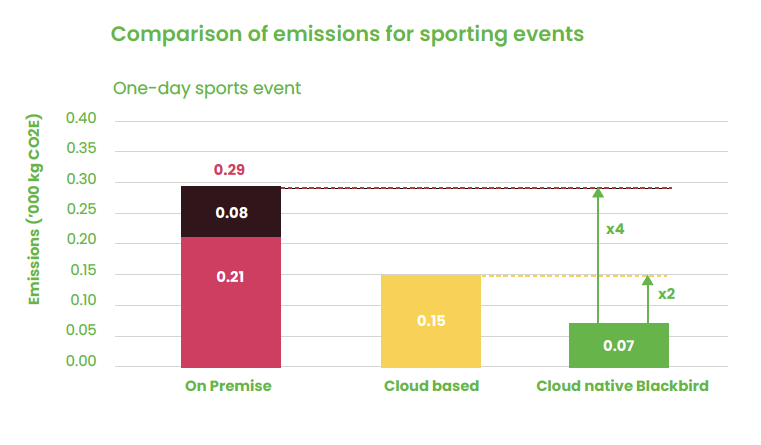 As everyone knows, one of the main costs of the cloud is getting stuff in and out of it. And when that material is being transcoded every time, the energy use starts to climb dramatically. Cloud-based editing uses more data and more hardware and thus produces more emissions. And expand all that over a two week sporting event and you get an even bigger differential, with the cloud-native workflow being 6x more carbon efficient than cloud-based and a massive 11x more than an on-prem solution. That’s a 91% reduction in CO2.

Obviously there are a fair few assumptions in all that, but those are roughly the areas of interest. And it’s worth pointing out that people movement (represented in black in the above graph) is by no means the worst offender in this area as it seems to be when it comes to assessing productions overall.

albert talks about how everyone on a production “be it set designer, make-up artist, casting director, or production manager” needs to be involved in the drive to make the industry achieve net carbon zero. And as that becomes more important and journeys from being a selling point to a critical factor at all levels of the industry, paying attention to every part of the process is going to be vital — and that includes what your data is doing in the cloud.