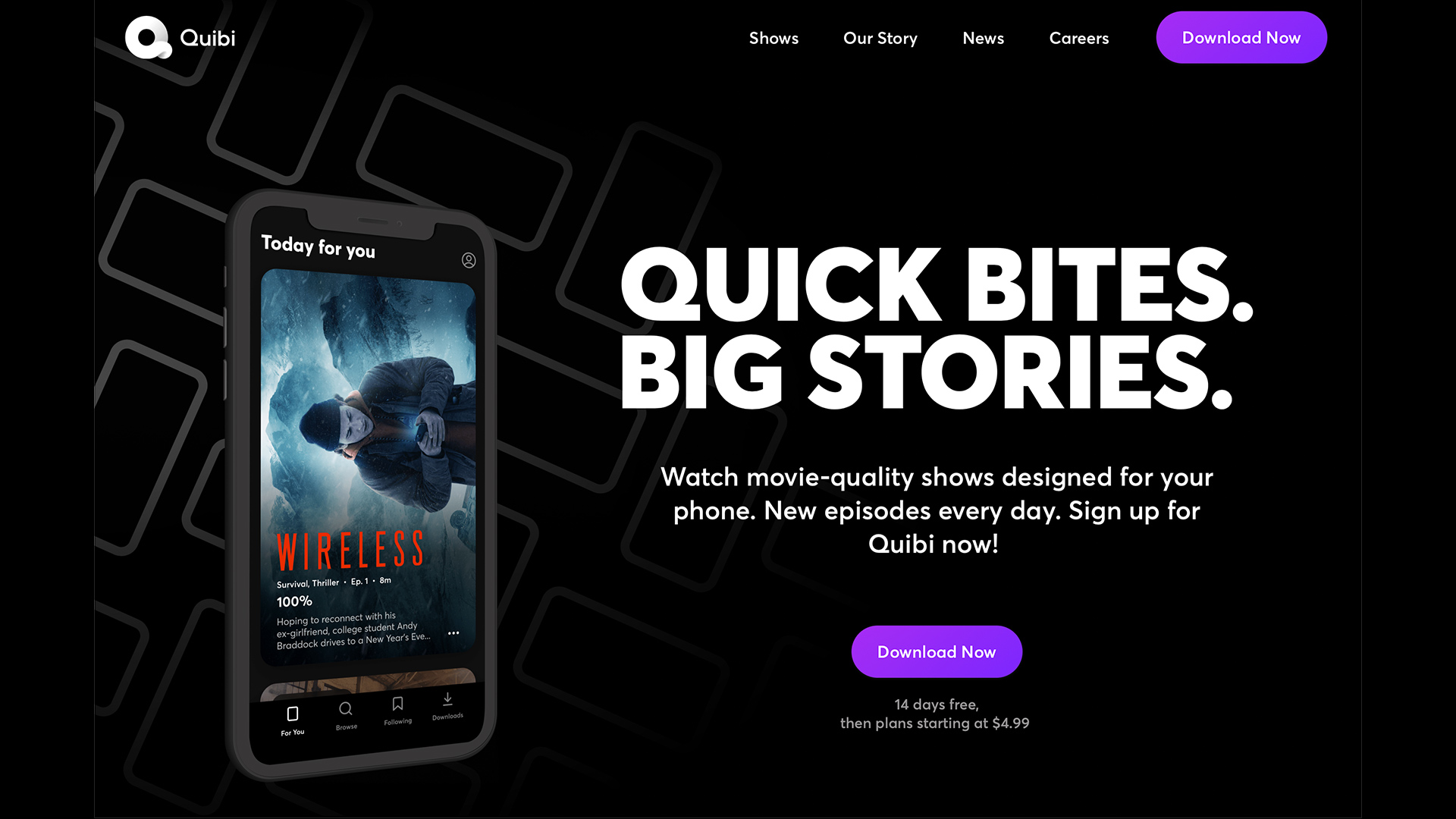 Questions over exactly how we’re going to fund online content, given everyone expects things to be free on the internet, are hardly new. Lots of interesting answers have been proposed. In the last few days, it’s become clear that one of those answers isn’t Quibi.

It’s fun to laugh at billionaire investors when their huge ideas fall apart, and there were certainly some very rich people involved in Quibi. Meg Whitman ran eBay during its period of greatest ascendancy and was predicted by the New York Times to be the first female president of the United States.

Quibi’s founder was Jeffrey Katzenberg, who was in charge of the Disney motion picture and animation divisions during their massive resurgence in the late 80s and early 90s, and went on to become the K of DreamWorks SKG (what’s less often mentioned is that he had, early in his career, been instrumental in the big-screen existence, and thus continued existence, of Star Trek in a previous role at Paramount). Quite how Whitman and Katzenberg could stand each other, given she’d won the Republican primary to become governor of California and he’d been a staunch supporter of various Democratic causes, isn’t clear, but it was the sort of group that would tend to impress investors.

And it did. Quibi spent a billion on content, which means it spent a billion hiring film and television production facilities, creative services and equipment. From the perspective of most of the people reading this, that’s a good thing.

Much as there’s much merriment to be had watching YouTubers succeed where the hyper-rich failed, let’s go out on a limb and accept that Quibi wasn’t a completely stupid idea, from any of several perspectives.

There was an audience for Quibi

There absolutely is a huge audience for short-form content delivered to cellphones. Anyone who’s ever been involved in a short film is presumably okay with the idea of telling a short story in motion picture form. Regardless of what anyone thinks of executives, Katzenberg has a convincing record of picking winners. Whitman perhaps less so – her tenure as CEO at HP is not fondly remembered by shareholders – but either way, Quibi was perhaps the first large scale commercial application of short filmmaking since cinemas stopped showing animated shorts before features.

Of course, Quibi was never intended to support short filmmakers in the sense that the term is usually used; it was not handing out funding to independents. The company reportedly did try (and fail) to involve at least one YouTuber, but generally it used perfectly conventional film and television production techniques to produce material capped around the ten minute mark. Though its content was unarguably short films, often in serial form, this was not an art project.

And thereby hangs the tail. The fact that Quibi as a company failed has very little relevance to most short filmmakers, who would not have been in a position to supply content to the company even if they’d wanted to. What is important is that it demonstrates yet another way in which funding short filmmaking doesn’t work. Lots of approaches have been tried.

They’ve been made as commercial entertainment, as we’ve already mentioned, but that petered out. Some modern commercials approximate short films. Crowdfunding has been tried. Patronage – that is, a rich person paying for it for fun – has funded artists for centuries, but filmmaking really is too expensive an artform for that approach to be widespread. Now, we’ve seen a whole over-the-top distribution company set up to try to do it, and that failed too.

About the only approach that allows lots of people to create short films is something like YouTube. Whether or not you want to take the position that Quibi failed mainly because it could not compete with free shortform content on YouTube, we really have to credit YouTube with making short filmmaking possible on a larger scale than almost ever before. Most of the productions it provokes are, to stretch a definition, short documentaries, though. That isn’t what most people mean when they say “short film.” YouTube doesn’t, or at least doesn’t often, allow people to produce high-end, single-camera drama to compete on production value with the best of Netflix.

So short filmmaking will have to continue languishing in its unenviable position as one of the world’s most expensive, and simultaneously the most underfunded, artforms. Perhaps if an organisation like Quibi had tried to be a little more down to earth in what it was doing, to involve the grassroots a bit more, things might have been different. It’s not hard to find a talented and interesting YouTuber and ponder what that person might be capable of doing with even a slightly larger budget. Perhaps one day someone will try doing that. It could hardly lose more money than Meg and Jeffrey just did.