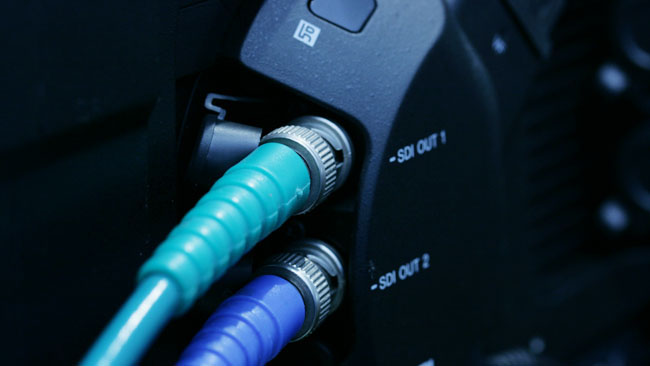 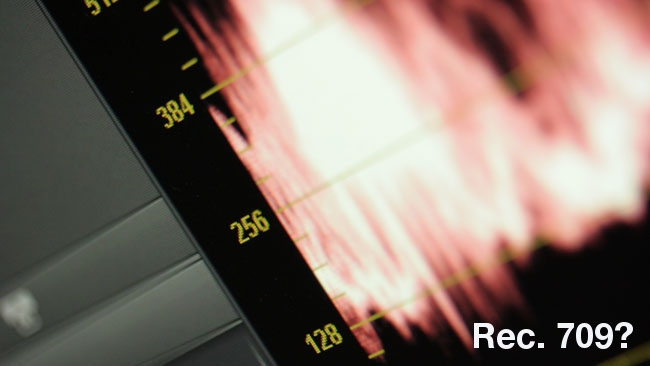 RedShark Replay: Phil Rhodes unpacks Rec. 709 for those of us that may be rather more familiar with the name than the science behind it.

One of the problems facing camera people is the huge number of ways in which pictures are provided, with every manufacturer developing its own cleverly-named approach to encoding colour and brightness. Beneath all this, acting to some extent as a lowest common denominator, is the Indepenedent Telecommunication Union's Recommendation BT.709, which is commonly referred to in camera configuration menus and casually thrown around in technical writing, as if its absolute characteristics were a matter of sheer instinct to most people. Its absolute characteristics, though, aren't widely discussed in everyday language. It's not that hard to find claims that Rec. 709 provides no more than five stops of dynamic range, but that's a bit of a leap, as we'll discover here. 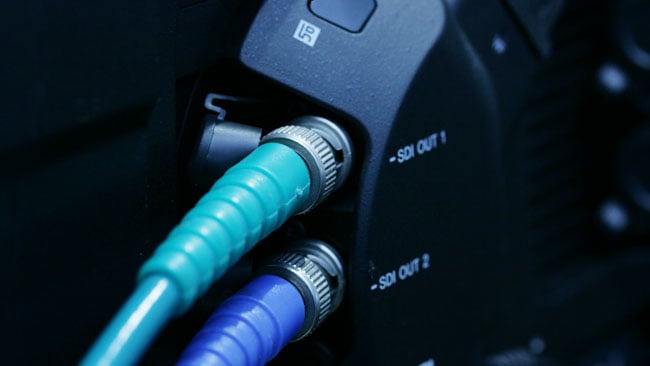 What exactly is going down with these wires?

The first thing to make clear is that Rec. 709 is (subject to some argument about how it's written versus how it's actually used) a standard for monitors, not for cameras, although in practice this can be a more-or-less equivalent situation. We can quite correctly refer to a Rec. 709 camera as a shorthand for one designed to drive Rec. 709 displays. This implies the camera will output a signal where the number of real-world photons hitting the sensor is encoded, so it'll look reasonable when the display decodes it back into photons again. The relationship between encoded numbers and the amount of light coming out of the display is not straightforward, for complicated historical reasons, and if it isn't right, the image will look too contrasty, too flat, to dark or too bright. 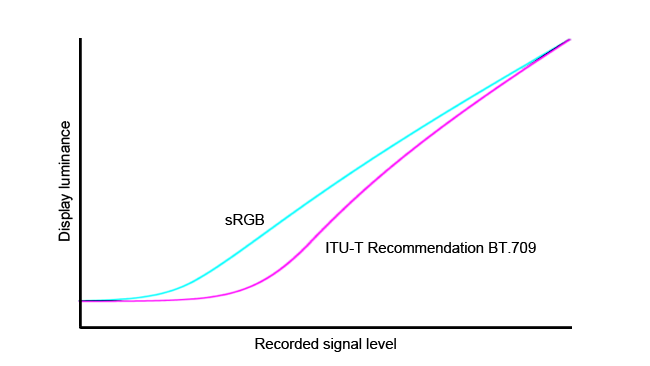 For the record, Rec. 709 defines a gamma of 2.2, which is a complicated way of saying that the actual stored brightness value in, say, a video file is based on the amount of light that hit the sensor raised to the reciprocal of 2.2, give or take some fudging in the darkest parts of the signal that's designed to hide noise. The number is chosen because the standard is written from the perspective of display; the power will be raised to the value 2.2, darkening it, when it hits the monitor, so we must brighten the image when we store it. The reciprocal of 2.2 is equal to one divided by 2.2 (roughly 0.45). This figure was chosen because a cathode ray tube display has a relationship between input power and brightness roughly approximated by raising the input power to 2.2, which goes to show how old a standard this is. Gamma encoding is necessary no matter what, because our eyes are not linear. We don't see a doubling of photon count as a doubling in brightness, so we would make very inefficient use of data space if we stored linear data (as we've discussed in other articles), but it was also a big part of how TV worked back in the days of CRT displays. Modern TFT displays have been engineered to emulate the same behaviour so everything works out nicely.

The other thing that 709 defines is colour. The fundamental approach of combining red, green and blue to create a colour image is straightforward; standards like 709 describe which red, which green and which blue should be used, defining a colour space. If we turn off both the blue and green light, for instance, we can never have a deeper red than the red dye used in the production of the display. 709 is notorious for its feeble greens, for instance, because the green dye defined in the standard is fairly pale and unsaturated. If things are wrong here – an excessively deep green, for instance –  the colours will be shifted toward green. Matching red, green and blue between camera and display (or, increasingly, matching them as far as mathematically possible) ensures reasonable images. 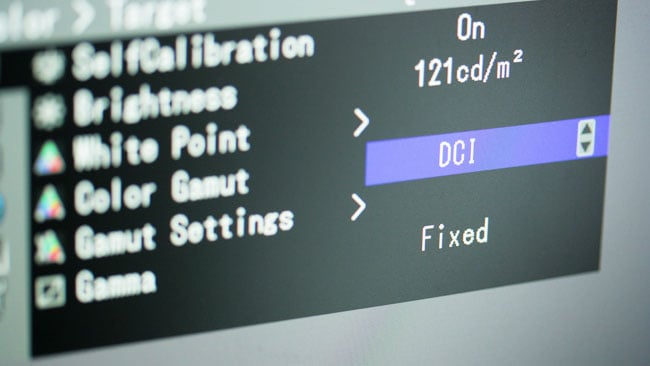 Many modern displays support formats other than Rec. 709, which may offer deeper colours or different brightness handling.

Colours are defined by their coordinates on a CIE chromaticity diagram. Because the diagram deals with hue and saturation, not brightness, a colour can be defined by only two numbers, rather than the three numbers (red, green, blue or hue, saturation, value, etc) usually required. The actual numbers for 709, for completeness, are 0.64, 0.33 for red, 0.3, 0.6 for green, and 0.15, 0.06 for blue. The standard also defines what point within that triangle is considered white, at 0.3127, 0.3290, which establishes the effective colour temperature of the display. 709 cannot display a green deeper than 0.3, 0.6 on a CIE 1931 diagram. 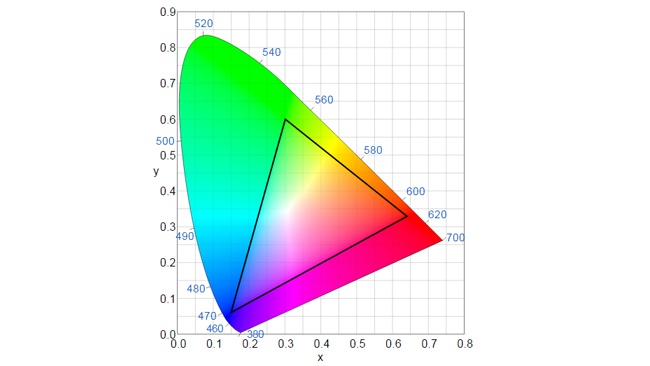 The coordinates for red, green and blue define a triangle on the CIE 1931 diagram,
showing all visible combinations of colour and saturation (but not brightness).

The weasel word we've repeatedly used here is 'reasonable'. It's a point of contention as to whether 709, by defining how brightness should work, really imposes an absolute dynamic range limit on cameras. In theory, 709 should ensure that different cameras should produce similarly-bright renderings of equally-bright real-world objects. However, it's a fact that a lot of manufacturers currently play at least somewhat fast and loose with the rules in the pursuit of more aesthetically attractive pictures. Imposing the limits of the standard directly would be viewed as completely intolerable in a more modern context. There is nothing technically stopping anyone reducing the dynamic range (that is, essentially, contrast) of a much higher dynamic range picture to the point where it looks good on a conventional display. After all, all this Alexa-shot stuff on TV at the moment originated on a camera with a fairly high dynamic range and we're all watching it, somehow, on 709 displays (or even Rec. 601 displays, the standard-definition equivalent).

This is achieved through the manual intervention of grading, the work of which is increasingly related to packing a high dynamic range picture into a distributable 709 one. Attempts can be made to automate this and this is generally, to some extent, the approach taken in modern cameras. Effectively no camera implements 709 directly. Even news-gathering cameras are likely to include options – call it auto-knee, a different colour setup, or whatever – which attempt to produce a nicer-looking 709 picture from the available image data. More advanced approaches to this come from things like Sony's 'Rec. 709 Type A' LUT, which is reputedly an attempt to create images recalling the style of the Alexa, in-camera, with no manual intervention. Whether this sort of thing can really be called a 709 image is a matter of contention, but if anything about the image is a matter of opinion (which it is, from lighting to framing to choice of lenses down), the approach seems reasonable. It's certainly effective. 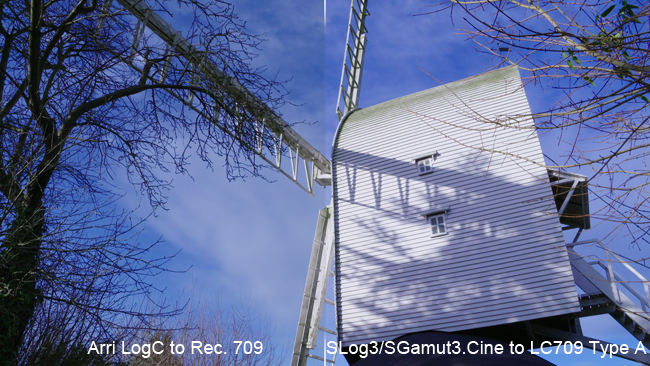 This image compares the output of two curves designed to convert log-originated material to 709.
Sony may be attempting to emulate Arri's approach.

The real technical difference here is that 709, at least as commonly implemented, does support more than a few stops of dynamic range. It's just that it's all packed into a tight curve at the very top of the brightness range, where it's represented by so few digital levels (and buried, therefore, in so many compression artefacts) that it's unrecoverable in grading. We shouldn't really be shooting 709 for anything that will be graded. In the late 1990s and early 2000s, many people became quite expert at making 709 cameras produce attractive, dramatic results. It takes careful lighting and it can be done, but if we select Sony's Alexa look on an FS7 and shoot accordingly, it'll still be easier to get decent results than it ever was before.

Rec. 709 is a baseline. Cameras that claim to output 709 images will look reasonable when connected to 709 displays. Lookup tables intended to convert esoteric, proprietary log modes to 709-compatible output are also common. 709 is useful because it's available on almost everything. It isn't, however, particularly capable and it isn't the future; the lack of colour range, in particular, is addressed in more recent standards. Rec. 2020, which is associated with UHD and 4K displays, improves things, but it'll take really advanced stuff, such as high dynamic range, to make improvements obvious to the consumer.

Like any old faithful, though, 709 will be hard to get rid of entirely.