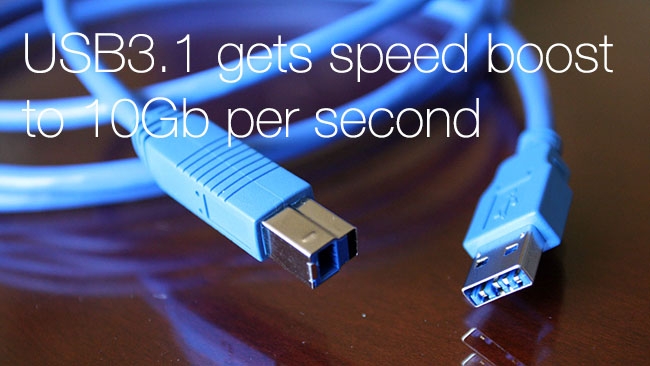 USB has become the most common connector on almost every computer and USB3 has been gaining in popularity. Now USB 3.1 allows for speeds of up to 10Gbps, the same as Thunderbolt version 1

Almost every computer or device we have has a USB port on it.  It has become the de facto format for connecting peripherals to computers and is even used as the charging socket on mobile phones.

USB3 has been gaining in popularity and most computers now come with at least one USB3 port, or they can be added by fitting a PCIe card. USB3 peripherals include hard drives, SSDs and Video capture devices.

Now the USB 3.0 Promoter Group has completed its USB 3.1 Specification, which will enable SuperSpeed+ USB, offering speeds up to 10 Gbps.

To get the 10 Gbps rate of the SuperSpeed+ USB, the standard uses more efficient data encoding. The USB 3.0 Promoter Group says it will deliver more than twice the effective data rate. This is possible by using enhanced USB connectors and cables.

"The USB 3.1 specification primarily extends existing 3.0 protocol and hub operation for speed scaling along with defining the next higher physical layer speed as 10 Gbps," said Brad Saunders, USB 3.0 Promoter Group chairman. "The specification team worked hard to make sure that the changes made to support higher speeds were limited and remained consistent with existing USB 3.0 architecture to ease product development."

USB3.1 will be backward compatible with USB2 and USB3 devices and it should be possible for some hardware to be upgraded to take advantage of the new protocol.

"We recognize this advancement in USB technology is an important development for our customers," said Tom Bonola, chief technology officer, Business PC Solutions at HP. "The USB 3.1 Specification enables us to meet the growing needs of our customers for faster data transfer while maintaining backwards compatibility with existing devices."

Intel are part of the USB promoter group, even though this speed boost will bring USB3.1 into direct competition with its Thunderbolt connection.

"The industry has affirmed the strong demand for higher throughput, for user-connected peripherals and docks, by coming together to produce a quality SuperSpeed USB 10 Gbps specification," said Alex Peleg, Vice President, Intel Architecture Group. "Intel is fully committed to deliver on this request."

"In this multi-device world, the USB 3.1 updates will enable end-users to move content across devices quickly, conveniently and without worrying about compatibility," said Emile Ianni, corporate vice president of Platform Solutions Engineering at AMD. "AMD thanks our engineers as well as the other technology contributors for bringing to market robust innovation that is designed to work seamlessly with new and existing solutions."

There will be a USB developer's day on the 21st of August where more information will be made available.