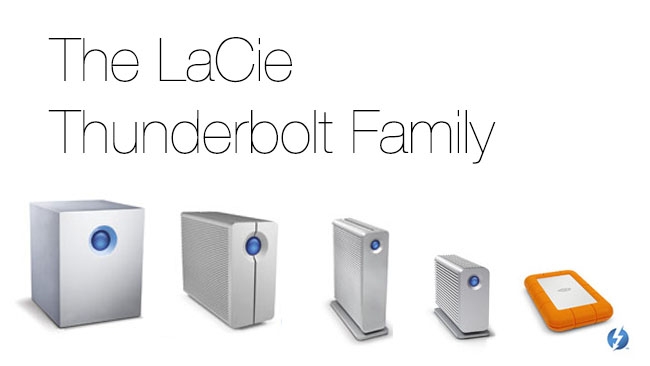 LaCie have been making high quality external drives for many years now and recently they have adopted Thunderbolt connectivity in a big way. I had the opportunity to test some of the Thunderbolt enabled drives and here are the results

LaCie are probably best known for their designer drive housings, with designers such as Neil Poulton, Porsche design and Philippe Starck creating some wierd and wonderful drive enclosures . The LaCie "Rugged" drives have become a ubiquitous sight on location and in edit suites as a handy format for moving media around.

LaCie were also one of the first manufacturers to release an external drive with Thunderbolt connections and they now have a whole family of Thunderbolt enabled drives, currently the widest range of any manufacturer. Lets take a look at the models that they have available.

The LaCie Rugged, with its instantly recognisable orange rubber cover, is now available with Thunderbolt and USB3 connections. It is bus powered and includes a USB3 cable and a short Thunderbolt cable (it's common for Thunderbolt peripherals to not include a cable). It can be fitted with a 120GB or 256GB SSD drive or with a 1TB Hard drive. I tested the speed of the 256GB SSD model using the Blackmagic Disk Speed test application on a MacBook Pro. (Using a 5GB payload file to simulate the sort of throughput required for editing). Using the Thunderbolt connection the speeds were 310MB/s write and 378MB/s read but interestingly the USB3 connection gave the same write speed but 429MB/s read speeds. I assume this is down to something in the data transfer protocol for Thunderbolt causing a greater overhead. The 1TB hard drive version gave speeds of 90MB/s write and 104MB/s read.

The benefit of having Thunderbolt and USB3 connections is that you can connect this drive to almost any computer, even if it only has USB2, although of course you wouldn't get the same transfer speeds.

The LaCie Little Big Disk is fitted with a pair of SSDs with capacities of 512GB or 1TB. It has twin Thunderbolt ports so it can be daisy chained and it also comes with a Thunderbolt cable. It is small enough to sit in the palm of your hand and weighs just 650g (1.4lbs)

The performance is stunning. Again using the Blackmagic Disk Speed test I got 424MB/s write speed and 508MB/s read speed. More than enough for working with HD material. By daisy chaining multiple drives this could go as high as 800MB/s. The drive comes configured as RAID 0 for Ultimate speed but can be reconfigured as RAID 1 or JBOD* using disk utilitiy.

The LaCie d2 is fitted with a single 3.5" hard drive and comes in 3TB or 4TB capacities. It has single Thunderbolt and USB3 ports so again it can be connected to almost any computer. As it is a single hard drive the performance is not up to the SSD RAID level but it's still not too bad. I got 192MB/s write and 192MB/s read. The d2 is larger and heavier than the Little Big Disk but has extra capacity so is ideal for backups or moving media between locations.

The LaCie 2big Thunderbolt is fitted with a pair of hard drives and comes in 4TB, 6TB and 8TB capacities. the drives can be configured in RAID 0, RAID 1 or JBOD*. Again it has dual Thundebolt ports so it can be daisy chained with other Thunderbolt devices. Testing the speed of the 4TB model I got 283MB/s write speed and 305MB/s read speed. Obviously this is a bigger and heavier unit and is more suited to desktop use than being carried around.

The LaCie 5big Thunderbolt is the big daddy of the family. Fitted with 5 hard drives it is available in 10TB and 20TB capacities and can be configured as RAID 0, RAID 1 or JBOD*. It has dual Thunderbolt ports for daisy chaining and even though it is based on hard drives and not SSD's the performance is amazing. I got 745MB/s write speed and 647MB/s read speed which made it the fastest unit by far. Obviously at 7.6kg (16.8lbs) you don't want this in your backpack but as a storage array for video editing it is ideal.

All these drives except the rugged come with a three year warranty as standard (the rugged comes with a two year warranty) but LaCie offer three levels of warranty extension. The Silver Care option extends the warranty to five years, Gold Care extends the warranty to five years and offers 48 hour product replacement and Platinum Care gives you five years of warranty with premium phone support, 48 hour product replacement and Data Recovery. You can also purchase Data Recovery insurance and advanced care as separate options. The prices are very reasonable, you can find more information on the LaCie web site at www.LaCie.com

Overall I was very impressed with the range of devices and with their performance. Full marks to LaCie for including a Thunderbolt cable as this can add $50 to the cost if you need to purchase it separately.

One other thing that sets the LaCie Thunderbolt disks apart is that they have drivers for Thunderbolt on the PC, so although there aren't many Thunderbolt equipped PC's yet, LaCie are ready for them.

They have also announced they will be releasing products fitted with Thunderbolt 2.0 later this year so those will be perfect with the new Mac Pro that Apple announced at the WWDC. I can't wait to see them in action.

* RAID 0 has the data striped across all the available drives which gives the fastest speed but no protection. RAID 1 mirrors the data on two drives so gives protection if a drive fails but halves the capacity and reduces throughput. JBOD stands for "Just a bunch of disks" where all of the drives are seen as separate disks by the operating system.