4K is brilliant - but not everyone agrees! 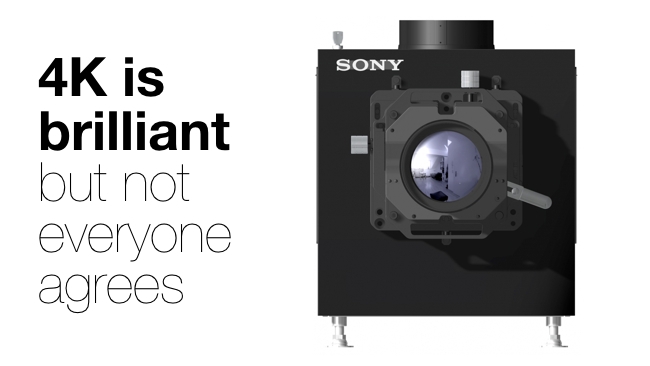 There are so many arguments for and against 4K that it's difficult for consumers — and even producers — of 4K content to come to a consensus. I think there is a bottom line here, which I'll mention in a minute, but meanwhile, I want to show you a couple of opposing arguments

John Watkinson, writing in The Register, says that because of movement in the image, and because our eyes move as well, the extra resolution provided by 4K is irrelevant and the financial and technical resources would be better-spent giving us a higher frame-rate.  John's a digital media guru, if anyone ever deserved to be called that, so you have to take his views seriously.

On the other hand,  Oliver Pasch, Head of European Digital Cinema Sales at Sony, writing in Film Journal International, has a different approach, saying that while frame rate and contrast are important, you can't deny that increasing resolution is an important part of the mix. Obviously Oliver has a vested interest in talking up 4K, but equally obviously, Sony does know a little bit about cinema projection.

If everything else is the same — frame-rate and contrast are the same (and assuming identical environments and colour-balance) then surely it can't be a bad thing if the resolution is increased? Certainly in a cinema, if you go close enough to the screen, if you have more, smaller, meaningful pixels, then you're going to see a better picture.

Arguably, a lot of the time the extra resolution might be wasted, but for the time that it isn't, surely it's worth it?

Finally, remember that arguments for and against 4K in production are somewhat different. "Future proofing" and the ability to zoom into a 4K image are benefits that will always be the case

If anyone — including the original authors — would like to shed some light on all of this, they're more than welcome.