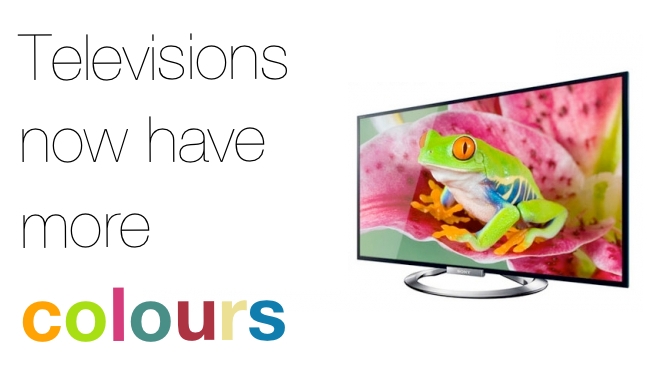 More colours from your TV

Sony's latest range of Televisions, the W9 series, feature a new backlighting technology which massively increases the range of colours that can be displayed.

The development of flat screen TV's has been extremely fast, from the first Plasma screens in 1997, to LCD, LED and now OLED screens, we have seen amazing increases in resolution and refresh rates, with the sets themselves getting larger and slimmer, but one thing that hasn't changed much is the limited colour capability of most flat screen TV's.

The colour range that can be displayed by a flat screen TV is dependent on the display technology and in the case of LCD or LED TV's it has a lot to do with the purity of the backlight. LCD TV's use cold cathode fluorescent lighting to illuminate the screen and have a fairly limited colour range, around 60-70% of the NTSC colour standard. LED TV's improved the situation slightly by using white LED's to illuminate the screen but they sometimes have too much blue in the image.

Sonys new W9 range of TV's are the first models to use a new backlighting technology based on "Quantum Dots", these are tiny LED's which emit very controlled frequencies of light and can produce a pure white backlight which enables the entire NTSC colour range to be displayed. Sony calls this technology "Triluminos" and there are currently three models available with 40", 46" and 55" screens.

The technology was developed by QD Vision of Lexington, Massachusetts and has been licensed by Sony for inclusion in its new range of TV's. At the moment there are only HD resolution models available but it's pretty certain that at least some of the 4K X series models which are due later this year will also use Quantum Dot technology to extend the range of colours on display.