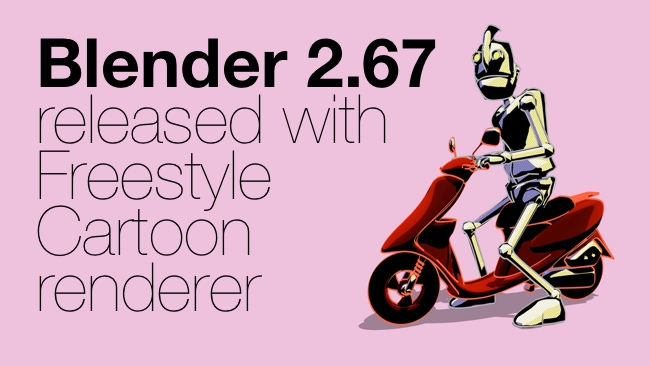 The free 3D-suite Blender has been released in version 2.67 this week. It includes the fruits of a development that started 5 years ago - the Freestyle line rendering engine. With this new engine it is possible to render lines based on their geometry, with countless possibilities for changing the style like line color, thickness, transparency etc. Blender expert Gottfried Hoffmann reports

At the moment Freestyle is integrated with the Blender internal render engine, but by using render layers and compositing it can be combined with any render engine supported by Blender, for example the physically based Cycles render engine. Possible uses range from cartoon rendering to architectural visualizations and technical drawings to computer-generated sketches.

The latter got support for Subsurface Scattering (SSS), a feature that is required when organic materials like skin, wax, milk, fruits etc. need to be rendered realistically. As the name implies, subsurface scattering simulates the scattering of light that occurs in many materials after light has penetrated a surface. The human skin for example has many layers and each layers scatters the light differently. Cycles is running on both CPU and GPU, for the latter a card that supports CUDA computing capability 2.0 or later is required. Older cards like the Geforce 2xx and 3xx series are no longer supported, but on machines that are using those cards the rendering can still take place on the CPU.

External render engines now have the option to define their own nodes via Python. The 'PyNodes' framework thus allows those engines to create a node-based worklow like in Cycles or the Blender compositor. One of the first engines to integrate with Blender in this way is Luxrender (http://www.luxrender.net), a physically based rendering engine with advanced features and GPU rendering via OpenCL.
Note that Pynodes are not limited to external render engines only. Any developer of Python addons can make use of them, for example to allow the node-based editing of geometry like it is known from Houdini.

The Node-editing workflow in Blender also has a lot of new features and usability tweaks. When a group node is created, its appearance is now a lot less cluttered and can be configured according to inputs and outputs. The look and feel of node groups is now a lot more like regular nodes. It's now also possible to use group nodes inside of other group nodes with the exception of recursion which might be added in a future release of Blender. Groups can also be edited independently in different node editor windows whereas in previous versions of Blender all node editor windows showed the same content. This can be taken further by using the new pinning options for node materials or textures. So different editor windows can show different materials or textures, allowing the editing of materials independently of the selected object.

The motion tracker also gets a substantial re-write that should result in a smaller number of reprojection errors for most cases. The tripod solver should also be a lot more accurate now and allow for automatic correction of focal length and lens distortion. The creation of proxies is now multithreaded and when a clip is loaded into the movie clip editor it can be prefetched up to the specified memory limit by pressing 'P'. The prefetching mechanism is also multithreaded.

There are a lot more new features and small usability tweaks in the new version 2.67 of Blender. The developers have also fixed more than 260 bugs that have existed in previous versions of Blender. Blender 2.67 is available for Windows, Mac and Linux in both 32 and 64 bit.